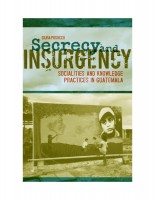 Secrecy and Insurgency: Socialities and Knowledge Practices in Guatemala

Secrecy and Insurgency is purportedly about the demobilization of guerrilla insurgents and their resettlement in the department of Petén in Northern Guatemala. Using extensive tracts of narratives from former guerrillas, it traces how individuals and communities once coalesced by their agency in armed conflict reckon with their identities and social relations as they settle in a national backwater in the wake of war. In doing so, however, Posocco’s volume also actively interrogates the processes through which we make ethnographic knowledge. As a result, it is a complex text with extensive reference to the scholarly debates and legacies that inform the author’s framing of the lives of former guerrillas in a geographic periphery.

Secrecy and Insurgency provides a unique perspective on the historical and ethnic context that gave rise to the conflict and its dissolution. Like others, Posocco claims that ethnic diversity often mapped into Guatemala’s geography is a defining feature of any knowledge produced about the country in popular and scholarly rhetoric. Yet because she is focused on an, until recently, understudied region and on former guerrillas of mixed ethnicity who resettled out-of-place, Posocco presents a Guatemalan reality that lies outside the typical narrative produced by scholars. One of the unique features of the volume is its thorough history of the Petén’s development understood as a project of governmentality. As such, it charts how the region fit into national development schema and the deep and institutionally entrenched participation of the Guatemalan Armed Forces in its development. Secrecy and Insurgency also interrogates the underlying ideological motivations for the 20th century “colonization” of the Petén which draws the reader squarely into understanding Guatemalan ethnic politics. Posocco’s ethnography is particularly focused on the “scramble of ethnicities” (p. 80) that resulted from the 20th century push to make the now geopolitically important and resource rich Petén region a regular part of the Guatemalan nation.

The former guerrilleros/as featured in Posocco’s ethnography draw particular attention to how identities and social positions are framed, disclosed and obscured through particular naming practices. Drawing on narratives of life in the midst of war, Posocco shows that the use relational pseudonyms and their constant change as guerrillas traveled and settled now result in naming practices with “holographic effects” (p. 103). Secrecy and Insurgency suggests that to understand how one is identified and engage in the art of identifying others in Guatemala, a wealth of sometimes illusive information is necessary to decode the partial representations of everyday life. Secrecy, a hallmark of living through war, has left a legacy in interpersonal interactions which in Nelson’s work is often defined are duplicities. Importantly, duplicities are relational in Secrecy and Insurgency. Posocco’s suggests that instances of duplicitous naming are more than intentional misinformation, rather the very practice of constructing obscured identities has become essential to the fractured yet still-relational identities guerrilleros/as make in their post-conflict lives.

Additionally, the narratives of war-time and its remnants presented by ex- guerrilleros/as show that militancy developed a national consciousness that was previously lacking. Choosing now to reside in communities of former militants rather than returning to ethnic enclaves, ex- guerrilleros/as narrate the importance of the shared experience of combat and survival to their own sense of self, community and future. Ex- guerrilleros/as attained a shared experience in combat but also developed what Posocco identifies as a “shared substance” (p. 155) which was through their struggle and cohabitation under constraints. The connections that ex- guerrilleros/as developed were so akin to family relationships that they are often described in kinship terms. Yet, the guerrilla experience did not only alter the social fabric, according to Pocosso, it also reframed moralities impacting their sexuality and the ways that they understood the value of life.

Interestingly, the importance of the shared experience of war sometimes extended to ex- guerrilleros/as’ relationships with former army personnel. Posocco suggests that ex- guerrilleros/as develop a “merographic capacity” (p. 132) that allows for particular forms of rapprochement with former enemies in battle. In the narratives Posocco collects such rapprochements do allow for the imagination of shared identity categories, like the peasant community, that transcend the war-time identification of former enemies. Posocco’s work shows that the development of possibilities for shared national identities happens through war in very specific terms and in the words of the men and women she interviewed throughout the Petén.

The social transformations that result from war are evidenced in much of the ethnographic work that is being produced by Guatemalan specialists of post conflict (Nelson 2009, Levenson 2013, Weld 2014). Ethnographers of post-conflict often place emphasis on the fluidity of identities, focus on the conjuring — our own and our subject’s — that yields a sometimes ephemeral grasp of realities and on tracing the perennial partiality of social allegiances. Silvia Posocco’s Secrecy and Insurgency shares this emphasis. Importantly, Posocco’s work also contends that post-conflict contexts inevitably challenge the assumptions of current ethnography’s turn to thick description. Co-existing practices of open secrecy and performative disclosure often exemplified in post-conflict Peace Accords force anthropologists to contend with the partial and performative knowledge production. Posocco clearly understands that “ethnographies of violence and conflict must simultaneously expose and conceal” (p. 16). Secrecy and Insurgency offers a deep engagement with our disciplinary constraints whilst also providing a unique perspective into Guatemala’s current social rebuilding.

M. Gabriela Torres, an Associate Professor of Anthropology at Wheaton College, MA, is a Guatemalan-born anthropologist specializing in the study of the violence and state formation. Her work explores the impact of violence on gender relations, nation-building and post-conflict reconstruction has most recently been published in Anthropologica and the Anthropology of Work Review. Her forthcoming co-edited book (with Kersi Yllö), Marital Rape: Consent, Marriage and Social Change in Global Context, is the first book to examine rape in marriage as a global problem affecting millions of women.

On the thirst for citizenship

Seeking Refuge in an Era of Naturalized Borders

Articulation as a Political Act? On a Study of Palestinian Shrines