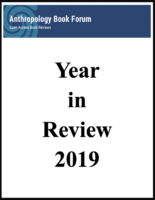 In our first ever letter from the editors we wish to return briefly to what we have published during the past year and to look ahead to what is to come. As a journal that exclusively publishes book reviews, we have the privilege of staying abreast of the newest publications in the field. In taking stock of those topics that attracted the most attention from reviewers, as well as situating these trends within current academic discussions in the US and beyond, we review some of the major themes that emerged this year. This review will further highlight a disciplinary divide that we hope we can begin to address in the coming year through engagement in a common discussion – more on this below.

Before turning to the reviews published in 2019, let us shortly lay out the aims of the Anthropology Book Forum, and the reason why we think this journal contributes to anthropological scholarship and research. The aim of the Forum at large is to facilitate a smooth and quick venue for book reviews written for a wide audience. The flexibility offered by the journal as to which titles are available for review and the rapid editorial process is meant to allow titles to be reviewed while still new – as a tool for researchers to navigate the most recently published work and to offer participants a chance to comment on, critique and debate developments in our field(s). It is also, we hope, a way to reach a more general reading audience outside of the disciplinary boundaries of anthropology.

This year we have seen considerable attention to public anthropology, activist anthropology, disciplinary ethics and the politics and practices of reaching broader publics. In addition, 2019 has been a year with continuous attention to migration, borders, and conflict. It is therefore not surprising that we’ve received several reviews on the topic of migration and borders – this is in line with a larger trend in the discipline of sociocultural anthropology with much work being done on the topic. A consequence of migration and immigration is, of course, questions of identity and belonging, another topic that has been brought up in more than one of our reviews. These questions of belonging and identity are continuously important and deserving of attention, especially in a time when many countries around the world are experiencing an upswing of right-wing political parties and immigration restrictive policies (US, Sweden, Denmark, the UK, and India for example) – how do people ‘become’ in such an environment?

As the field of medical anthropology continues to grow, we are beginning to see comprehensive overviews, such as The Routledge Handbook of Medical Anthropology. In addition, there has been attention to new audio-visual methodologies, such as in Robert Lemelson’s and Annie Tucker’s Afflictions: Steps Toward A Visual Psychological Anthropology.

The interest in heritage studies has maintained a steady momentum throughout 2019, and there are multiple interesting titles on the horizon. During the past year we have published three reviews on the topic of heritage, including World Heritage on the Ground: Ethnographic Perspectives by Christoph Brumann and David Berliner and Cuban Cultural Heritage: A Rebel Past for a Revolutionary Nation by Pablo Alonso González. Further, this year has also seen much academic interest on the topic of infrastructure, such as in The Promise of Infrastructure edited by Nikhil Anand, Akhil Gupta, and Hannah Appel, as well as the anthropology of development, urban anthropology and the anthropology of time.

We’ve also seen some new developments in archaeology, such as Andrew Reinhard’s Archaeogaming as well as interdisciplinary approaches, such as Manzanilla’s (eds.) Multiethnicity and Migration at Teopancazco: Investigations of a Teotihuacan Neighborhood Center. We’ve only published three reviews of archaeology titles this year however, and we’d like to say a few words about the field’s representation in the Journal.

Outreach and Call for Reviewers

As a point of departure, let’s begin with Anthropology Book Forum’s Focus and Scope:

Anthropology Book Forum publishes reviews of both books and films of relevance and interest to a general anthropological audience, including sociocultural, linguistic, biological and linguistic anthropology as well as archaeology and closely cognate disciplines.

In this statement we find the term “sociocultural” as well as “archaeology,” and we wish to hold onto the pair for a little while. When browsing the most recently published works, it is evident that most of the literature published yearly under the broad category of ‘anthropology’ are the ones we mostly offer our reviewers. However, even though, by number, the titles in either archaeology or social anthropology are fairly equal, we mostly receive reviews of sociocultural titles and are seeing less engagement from archaeologists. And hence the question, why are archaeological titles not attracting reviewers? Or perhaps alternately, why aren’t archaeologists and archaeology students interested in publishing reviews in the Journal?

Possibly we, the editorial team, have not managed to reach the archaeological scholarly community as effective as the sociocultural one. When writing to individual scholars, however, we find that this ‘trend’ has prevailed, with sociocultural anthropologists taking more interest in publishing reviews with us than archaeologists. This is in no way an attempt to criticize; on the contrary, we ask archaeologists reading this to have a look at our great variety of titles for review, to engage with debates that cross both fields, and to assist us in publishing reviews on work important for the field of archaeology. In addition, we hope to bring insights from both fields into common discussions that cut across the four fields of anthropology.

The editorial team is well aware of the ongoing debate about the lack of engagement between archaeology and sociocultural anthropology even though there is much to be learnt from one another and despite the four-field structure of anthropology departments in the United States. The idea behind starting this journal in the first place was to create a forum for dialogue, and what could be more important than assisting and facilitating a forum of common knowledge production and communication across fields and disciplinary boundaries! As discussions continue about the value of interdisciplinary and multidisciplinary conversations and collaborations, we hope that these segregatory trends will not stem the flow of discourse and limit this journal to the socio-cultural field alone. That said, we will be pursuing archaeologists this year with the ultimate aim of publishing more reviews of archaeological titles in 2020.

The Year to Come

In the year to come, we are hoping to grow the journal in several ways in order to publish more, offer new formats for book reviews and engage a wider audience.

We will experiment a bit with our format in 2020, opening up the Journal to allow for other styles and forms of reviews. We will also offer interested reviewers not only the titles listed on our website for review, but also the option to find titles of their own liking (relevant to anthropology). This, we hope, will expand the overall diversity of book reviews we publish.

Beginning in January 2020, we offer the possibility to review books in two new ways, in review article format or as a video review:

Review articles: Review 2-3 titles at once and keep them in a dialogue throughout the review. This format of review will be a bit longer than our original type, asking reviewers to hold a length of 1750-2000 words. The purpose of review articles is to allow for a more in-depth discussion, comparison, and debate of a particular theme or idea and trace its development within the discipline.

Finally, before we go, we wish to thank our readers and contributors for their engagement and to also extend an invitation to those not yet familiar with the Journal to use it as a resource as well as a platform for engagement. It is with great excitement and anticipation that we look forward to the coming year and to a more dynamic, inclusive and expanded Anthropology Book Forum.

Best wishes from your editors,

Be sure to check out our new Facebook page for news and updates: https://www.facebook.com/Anthropology-Book-Forum-117305059654437/