Unpaid Family Leave in the US: The Benefits of Offering More (?) 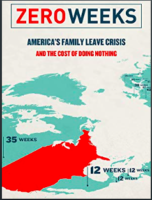 Ky Dickens is the director and the producer of the documentary Zero Weeks which aims to inform and raise awareness about paid family leave in the United States. Zero Weeks presents speeches by activists, economists, policymakers, researchers, a doctor, small and large business owners, in addition to personal stories of people who have been personally affected by the topic.

In the United States, parents and families are protected under a federal law: the Family and Medical Leave Act (FMLA). Under this law, employees are protected with up to twelve weeks of unpaid family leave for some medical and family reasons[1]. However, these twelve weeks are far from guaranteed and are subject to some conditions: the company must have at least 50 employees, and the employee needs to have been working more than 25 hours a week for over a year. It should be noted that, according to the documentary, the United States is the only country in the world with Papua New Guinea that do not offer a paid leave law, and the only one among developed countries not offering it. Zero Weeks shed light on this delay of the United States compared to the rest of the world. The states of California, New Jersey, and Rhode Island addressed this issue on their own in 2017, and have passed paid leave laws showing that the costs amount to less than a cup of coffee per week for each person within the state.

Dickens herself has experienced the shortcomings of the law. Like most Americans, she naturally felt entitled to have twelve weeks leave after giving birth; however, since her place of employment had less than 50 employees, she was not. Even if she had been employed more than ten years, her employer could have demanded she return to work within days after giving birth. She says that a lot of mothers has to, and the situation is similar for fathers or same-gender partners. Dickens had to return to work after only six weeks –needless to say, she was not ready at all. Her wife, meanwhile, had to return to work two days after the birth of their child. Dickens was shocked by their experience, did some research and realized that many other people had been in a similar situation and that she and her spouse had actually been among the lucky ones. It is hard to imagine that one out of four US women returns to work within two weeks after giving birth; in fact, only 15% of American employees have access to paid leave, and only 5% of low wage workers.

Most people live from paycheck to paycheck. Some believe they are part of the middle-class, while they are one incident away from going bankrupt. Nearly half of Americans say they could not find $2000 even by asking for support from relatives, and one third have no savings at all. Taking these facts into account, even if the employee succeeds in obtaining a leave, he/she will not be paid. So what will he/she do to continue paying rent, bills, school fees? The reality is that thousands of Americans cannot afford to go without a salary. The documentary is very clear: the reality is that, in the United States, people don’t think about paid family leave until they need it. Then reality strikes. The truth is, one day or another almost everyone will need to take care either of a newborn, a sick relative, an elderly parent, or of themselves after an accident or an illness.

The documentary exposes personal stories of several people affected by this reality. There is a father that had leukemia and was fired along with his wife, who worked at the same place, to make sure she would not take days off. There is a woman diagnosed with stage four breast cancer while being a mother of a two-year-old kid. Her doctor suggests she go on disability leave for the duration of her treatment – but she cannot afford it financially. Another woman works five days a week while visiting and taking care of her ill mother every morning. Yet another woman lost her twins, and her husband only had six days off from work to be with her to mourn and prepare the funerals. Then, this couple had another baby and the father had to return home responding to e-mails only 6 hours after childbirth. A 20-year-old mother had four weeks leave but had to return to work due to lack of money. Another woman gave birth after 27 weeks of pregnancy and only had four weeks of unpaid leave to recover from her c-section before going back to work, while her very premature son was fighting for his life in intensive care. Her husband did not have any days off. The people presented come from different socioeconomic backgrounds and are from different ethnic groups.

In Zero Weeks we learn that even though most people (even among politicians) agree that family leave is necessary, no one moves because no one knows who will pay for it. The argument that it will hurt the economy comes back a lot. However, states that apply such policies of paid family leave see benefits for both citizens and businesses. The myth that it will hurt small businesses, that people will take advantage (abuse) is tenacious but many employers have gone ahead and are telling the benefits. Yes, it has costs, but they integrate them into the structure of their business. The documentary presents a few  strategies to be able to give families paid leave and the benefits that companies  noticed doing so – like a more positive business climate and keeping their employees. Employees mentioned that this meant a lot and pointed out that they probably would have resigned without this policy. The documentary indeed shows some people who decided to leave their jobs because of the little family leave time they had. Their productivity, their loyalty and their desire to continue with the company were no longer there. It shows that while it costs something for the company to voluntarily provide paid family leave, it is evident that doing nothing also comes at a serious cost (just think about the cost of replacing an employee, among others). The documentary points out that paid family leave could be funded through a small payroll deduction from employees, and work like an insurance program. It clearly details the benefits of having an FMLA. For example: fewer infant deaths, more women in the workforce, less absenteeism, less postpartum depression, longer breastfeeding periods for mothers (leading to a better bond of attachment), and parents that will be able to go to their child’s appointments, etc.

Zero Weeks also presents the situation of fathers, the prejudices that persist when they want to benefit from paternity leave, and how little they get. The documentary also addresses the reasons why women often remain at the bottom of the ladder in the organization of a business. This production is full of shocking and dramatic statistics that make aberrant and incomprehensible that the USA could have a delay of this kind in its legislation compared to the rest of the world. Some Americans were invited to the documentary to talk about the usual arguments provided by those who are against the paid family leave, but it would have been fairer to also present interviews with those who are really opposed to it, in order to present a more balanced view, a counterpoint, and more accurately discuss this complex situation. To say that the United States is the only country in the world with Papua New Guinea not to offer paid family leave is one thing, but it must be put into perspective. In most developing or undeveloped countries people are not employed by public, private or governmental enterprises. So even though their country offers this policy, it only applies to a small minority of people since most of them work in the informal work market. The majority must be resourceful just to get by (for example selling fruits and vegetables, hand-made clothes).

The documentary shows the social, economic, medical, marital and global advantages of paid family leave in the United States and provides many facts, statistics, maps and graphics that make it easier to understand the situation. Zero Weeks is relevant and essential to anyone interested in sociopolitical issues of this kind, and I recommend to watch this tumbling documentary which is a solid base to understand the dynamics couples have to face when deciding to have a baby in the United States today. Zero Weeks offers a good first contact with this financial situation for those inclined to understand, and possibly, act to change the current legislative and political situation surrounding paid family leave in the US.

Véronique Senécal-Lirette has a master’s degree in social work from the Université du Québec en Outaouais, with her primary field research taking place in Senegal. She has worked as a counselor for people who have experienced violence, addiction and mental health issues. Her research interests include women’s rights, mental health, traditions and the arts

[1]For more information about the FMLA: https://www.dol.gov/general/topic/benefits-leave/fmla(consulted on November 4th, 2019)