Airing Out the Carpet

Rural objects from Central and Eastern Europe lie forgotten in museum collections. Their histories reveal much about curatorial and public perspectives on the region.

The stores of many ethnographic museums are full of objects from rural Central and Eastern Europe. Yet these collections have been overlooked in the critical debates in museum anthropology and curating. From Bucharest to Warsaw, rural artifacts tend to be displayed as “folk art” or “traditional objects” without any indication of their history or stories of users and collectors. Outside of the region, in London or Berlin, collections from Eastern Europe continue to represent arm’s length alterity and quirky, pre-industrial living. Dace Dzenovska and Nicholas De Genova identified such places as “not quite” European, that might be included in Europe but “deemed to fail in various ways in relation to the normative trope of ‘Europe’ as a measurement of ‘civilization,’ or moral, political, or economic conduct.”  For many curators, tourists, and even Royals, rural Eastern Europe appears as a “not quite” European dreamscape of rustic authenticity with picturesque thatched cottages and ancient crafts.

Following the collections of the Museum of European Cultures in Berlin (MEK), I seek to tell different stories about the complex relations between social lives, violent pasts, and material politics. By highlighting experiences of displacement, dispossession, and political instrumentalization of the objects within and beyond the region, these narratives problematize the vision of bucolic dreamscapes. Rather than marking unchanging, insular utopias or backward eastern provinces, this material culture can reveal difficult pasts about the bloodlands of Europe, Cold War relationalities, or situated processes of marginalization. It is not detached from asymmetrical encounters, acts of violence and dispossession, dramatic social changes, and practices of boundary making. It is entwined with political histories and the wider moral economies of collecting and displaying rural objects.

A rectangular piece of carpet is stretched out horizontally. It has a light border and the designs inside consist of various geometric shapes. One short end of the carpet has a visible tear.
Credit: Magdalena Buchczyk/Konrad Hahm 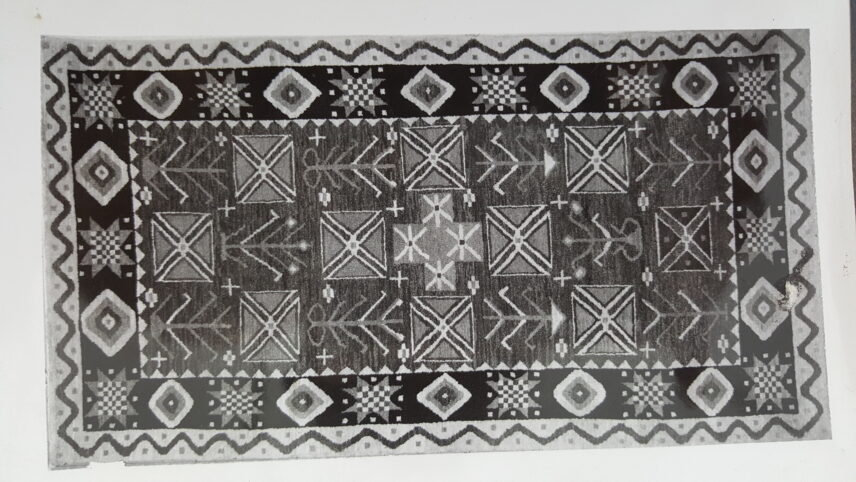 The illustration from Konrad Hahm’s monograph used for the post-war reconstructions of the Masurian carpets in Poland. The reconstructions differed in the color palette as the source images were black and white. The weavers had no access to the objects in the Berlin museum.

In 2019 I interviewed a retired curator of Berlin’s Museum of European Cultures about an unfulfilled curatorial dream: “We always wanted to do an exhibition with the Masurian carpets […] A European project to see what happened there, where the things met.” This was a symbolic exhibition project of a post-Cold War institution, aiming to bring fresh air into the historical collection. During the 1930s, the MEK’s predecessor, the Museum of German Folklore (Staatliches Museum für Deutsche Volkskunde), acquired a collection of textiles, carpets, and woven coverings from the picturesque lake district of Masuria, historically part of East Prussia. In 1937, the museum director Konrad Hahm published a book on the objects, describing the weaving techniques and arguing that the textiles were not a product of “Oriental” influences but part of the “cultural region of the North.” This Nordic theory chimed with Nazi-era folklore studies of the time. As the textiles were first displayed in the Deutsche Bauernkunst (German Peasant Art) exhibition in 1935, they showcased a racialized colonial vision of the ongoing 2,000-year-old German settlement and right to territory both in East Prussia and across Eastern Europe.

After the Second World War and Yalta, the Masuria region was incorporated into Poland as part of the “Recovered Territories,” the former eastern territories of Germany that became part of Poland. In 1946, over 60 percent of the formerly diverse region’s population were German-speaking Masurians. Stalin instructed the USSR-controlled government in 1950s Poland to, writes Timothy Snyder, “create such conditions for the Germans that they will want to escape themselves.”

So-called population verification included targeted repressions, deportations, imprisonment in labor camps, and relentless political pressure. This led to waves of departures of German-speaking Masurians. The Recovered Territories were to be made Polish by resettlement and removing traces of “Germanness.” The process of “polonizing” the region had already been taking place in the tumultuous post-war years, when refugees and looters entered the abandoned Masurian houses. The empty Masurian villages provided new homes for those fleeing the “bloodlands” of Eastern Europe.

Basia, one of the Ukrainian-Polish settlers in post-war Masuria, vividly remembered the sheer chaos of forced resettlement to the Recovered Territories: “Who came here voluntarily? The harmed one, the hurt one, the wounded one. And would they be here if it weren’t for the war? Everyone would be sitting in their own cottage and wouldn’t even know what was going on over the fence. Who knew about the Recovered Territories? Nobody knew. And who had a map in their head? […] They went to one place and landed somewhere else.” She reflected on the double tragedy of the Masurians and the settlers in the region:“ Nations were supposed to be monochromatic – we were, we are, we will be. And at that time the culture of the Masurians was destroyed and the settlers […] buried their clothes because people were laughing at them…much was destroyed because of it.

The newcomers had to learn to live with their own displacement and the material traces of those expelled from the Masurian countryside. The Recovered Territories of post-war Masuria became a laboratory of Stalinism and a land of suppressed and devastated heritage.

A dark-haired woman in loose clothing kneels in front of a rug, reaching out to touch the middle of it. The rug is brown, cream, orange, and grey with some hints of blue. There are two borders bearing different geometric designs and the interior bears a collection of other designs, including what looks like a building.
Credit: Magdalena Buchczyk 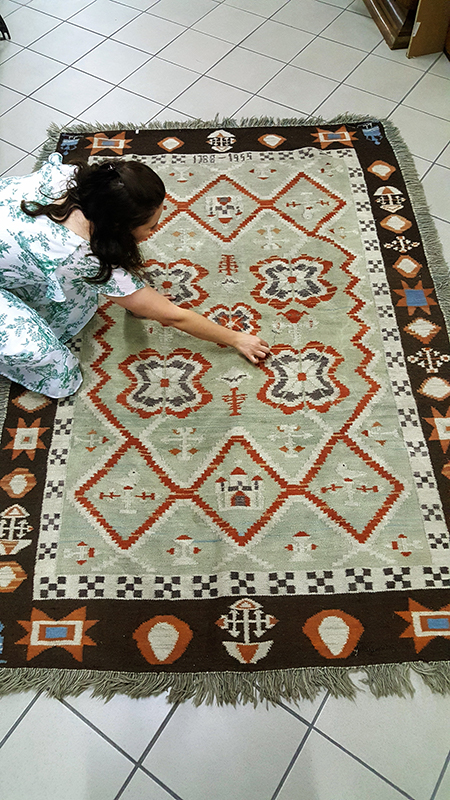 A curator unrolls the 1955 reconstruction of the carpet from Hahm’s collection made for the Museum of Warmia and Masuria in Olsztyn (formerly Allenstein).

My research on the lives and afterlives of MEK’s Masurian carpets took me to museums in Warsaw and Olsztyn (formerly Allenstein), where I found post-war reconstructions of the Berlin’s collection. In the press archive of Olsztyn Life (Życie Olsztyńskie), I came across an announcement, dated June 3, 1955, bearing the title, “After 200 Years, the First Masurian Carpet Made in Tkanina,” referring to the Tkanina textile cooperative. The article, typical of Stalin-era journalism in trumpeting a target met well ahead of its deadline, pointed out that the reconstruction work concerned Polish national heritage:

Masurian carpets, with their specific designs, were made in the past by the local population of Polish origin. This is evidenced by their clear affinity with Polish patterns. […] It is worth mentioning that the German ethnographer Konrad Hahn [sic], in his source text devoted to the history of carpet-making in Masuria, clearly states that it refers to contemporaneous Polish production.

The Tkanina cooperative in Mikołajki made reproductions of the Berlin collection for different museums across Poland. These museums, like in Warsaw’s case, lost most of their objects during the war and needed to reconstitute their own collection.

Interviewing former workers of the now-defunct cooperative, I learned how the women who came to the Recovered Territories brought skills and fabrics, working with the remaining German-speaking Masurian weavers. In Masuria, the cooperative built on the legacy of both Masurian crafts and the diverse incoming population. The region’s complex history and shifting population were entwined with the objects, and later deposed in the war-torn museums. The history of the pieces incorporates the painful outcomes of post-socialist shock therapy on the cooperative and the unmaking of the unique community that had been galvanized around weaving in Masuria.

An older woman in an orange shirt and a checkered headscarf sits on on a chair, gesturing to a square of patterned fabric on her lap.
Credit: Magdalena Buchczyk 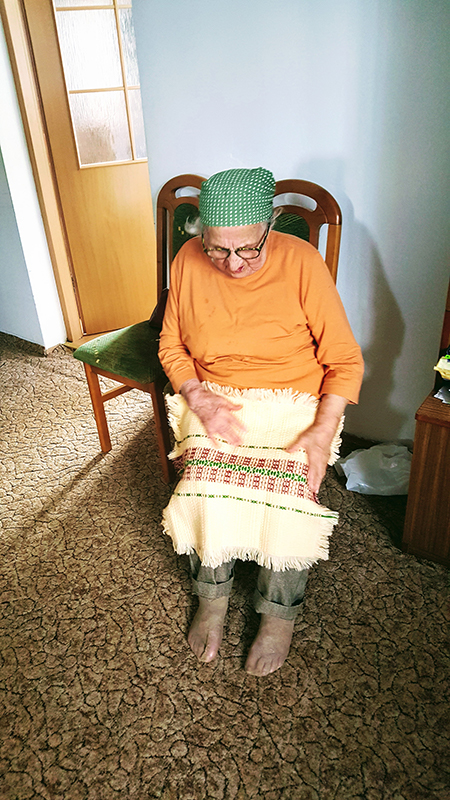 A former employee of the cooperative presenting textiles inspired by Masurian designs and the samples taken from her homeland in today’s Belarus.

History shows that areas such as Masuria are repeatedly launched into the center of struggles over different formulations of Europe. The MEK curators in the 1990s saw Hahm’s textiles as critical for the new museum’s curatorial reimagining of the formerly national objects. What appeared at the margins of unifying Europe requires our attention as a diagnostic arena at the heart of critical questions about Europe, historically and today.

A beige two-story building sits in front of a dirt road. A number of cars are parked in front of the building and on the road.
Credit: Magdalena Buchczyk 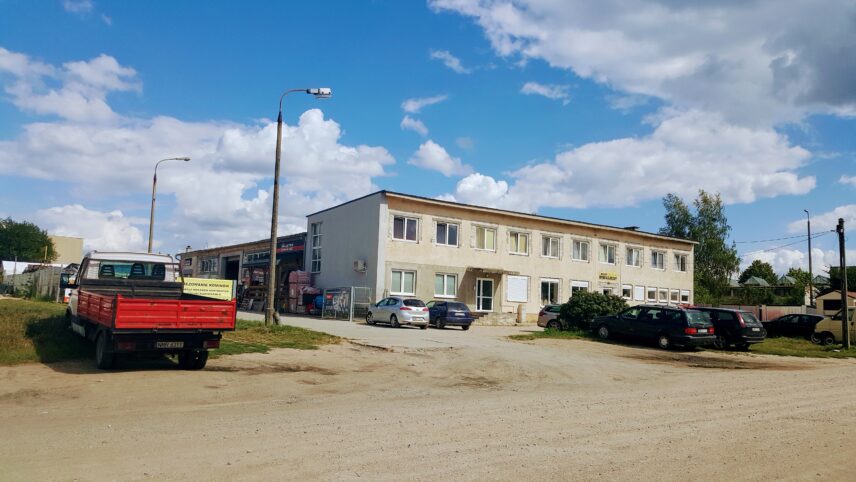 The building of Tkanina in Mikołajki following the closure of the cooperative as part of post-socialist restructuring. The complex now serves as storage for building materials. Tkanina’s former employees live on the opposite side of the road in workers’ housing.

As the first Russian bombs fell on Ukraine in February 2022, a CBS journalist expressed his shock that such attack would happen in a “relatively civilized, relatively European city.” Much of the coverage in the first days revealed both racist and Eurocentric undertones of the apparent shock of war on the continent, disregarding the years of war since 2014, the continuity of Russian imperialism in the region, and the recent history of conflict in Europe. The ignorance about Ukraine and the qualifier of “relatively civilized” deserves our attention, revealing its ambiguous, “not quite” European nature as a grey area and a geopolitical buffer zone.

What appears as “not quite” European needs to be re-examined as a site of questioning, critique, and hope. Unearthing the stories of the “not quite” European rural objects forgotten in ethnographic museums can help us not only reconnect these collections with critical scholarship in museum anthropology but also ask pertinent questions about the coloniality of the (curatorial) perspective on Eastern Europe.

Magdalena Buchczyk is a junior professor in social anthropology at Humboldt-Universität zu Berlin. Her current research addresses museum collections from Eastern and Southern Europe through a critical lens of heritage studies and material culture. Buchczyk’s monograph, Weaving Europe, Crafting the Museum, will be published in 2023.