DNA Testing of Immigrants Is Unethical

The collection of genetic biodata for the reunification of families must safeguard individuals’ agency, provide meaningful informed consent, and protect privacy.

DNA testing has been used for nearly two decades to prove family relationships for visa petitions as part of the United States Refugee Admissions Program. Questionable as that may be, the use of DNA testing for immigration purposes has expanded in recent years to include testing detained immigrants, including separated minors at the United States–Mexico border. This latest development has created significant bioethical concerns, leaving many scholars, including me, questioning how we got here and what do we do next.

It started in the summer of 2018, when US Customs and Border Protection (CBP) officers under the Trump administration began separating migrant children from their families at the United States–Mexico border. The US government proposed using DNA testing to determine if a biological relationship exists between children and their accompanying adults. Advocates argued that DNA tests could reunite separated families and also prevent human trafficking. Critics such as Zeid Ra’ad al-Hussein, the United Nations high commissioner for human rights, Amnesty International, and members of Congress from both sides of the aisle argued against the plan, leading the Trump administration to put the plans temporarily on hold.

However, in October 2019, the New York Times reported that the Department of Homeland Security (DHS) planned to restart DNA testing, and in January 2020 that plan became a reality. It entailed collecting a much more comprehensive genetic profile than previous pilot programs and storing the genetic profiles indefinitely in the FBI’s Combined DNA Index System (CODIS) database, accessible by state and law enforcement authorities.

Image description: Thin bands of color are stacked atop each other to form columns with numerous hues ranging from pink to blue to red to green. A number of these columns are lined up side-by-sideiStock
Credit: iStock 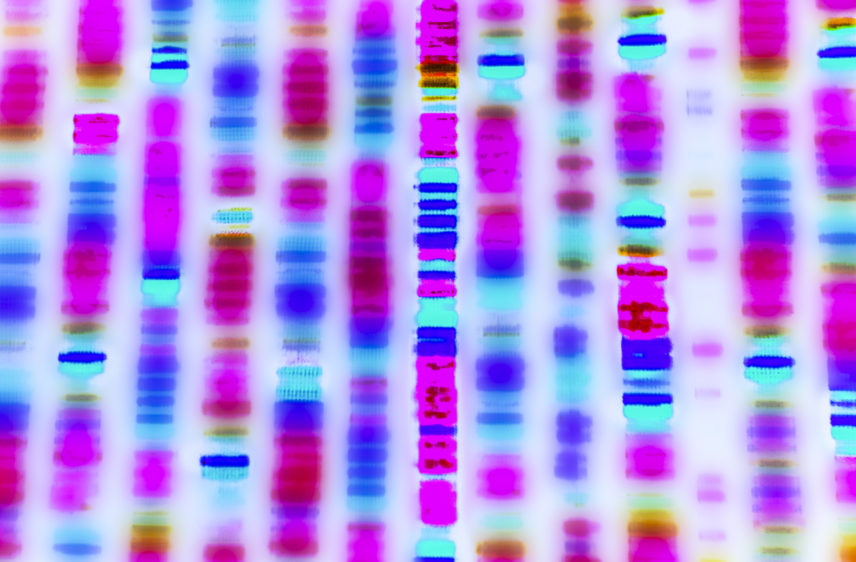 Graphic representation of the DNA sequence

Then, in September 2020, BuzzFeed News reported that it had acquired access to a draft US government policy, which detailed plans for collecting multiple forms of biometric data, including DNA, to establish bona fide genetic relationships between adults and minors in DHS custody.

While it is true that DNA testing would offer a scientifically valid way of confirming familial relationships, we must ask, Is it ethical to collect and store this personal information to address the problem of 666 children still separated from their parents?

An underlying argument against DNA testing in immigration is grounded in the concept of genetic literacy. As an applied anthropologist, I’ve studied and spoken up about consumer genetics over the past four years. In my research on the direct-to-consumer genomics (DTCG) market, I’ve found that the majority of participants lack an appreciation and understanding of the ethical concerns related to DNA testing.

For example, in a survey of 353 participants, I found that 52 percent did not read the privacy policy and terms of service when buying the test and thus lacked a firm understanding of the risks and considerations. Similarly, many participants in my interviews made statements similar to the following two comments:

Yeah, I mean I was like, you know, I think it’s all about genetics, so it’s not something I personally understand, but these are companies that do genetic testing like they seem pretty sure. You know, like scientific facts. (35-year-old male interviewed in 2018)

I don’t think it’s significant because I don’t know. It’s just life. It’s not my address or my social security number. I don’t feel like I could have a monetary loss on this one so I can affect my health. I mean, I don’t understand how my DNA being in the hands of somebody is going to hurt me. (48-year-old male interviewed in 2018)

I share these examples to illustrate the cavalier attitude and behaviors of many consumers, including me, who actively sought out a DNA test and opted to buy it. But if willing consumers demonstrate these behaviors, what about immigrants who are compelled or coerced to take a test? Will they be afforded a meaningful informed consent process? Will they truly understand all of the potential risks of having their biocapital stored in perpetuity in the CODIS database, or how that may be used, potentially against them, in the future?

I argue, no. As my colleagues and I first contended in a poster presented at the 2018 American Anthropological Association Annual Meeting, adults in the United States appear ill-equipped to understand the complexity of genetic testing. Likewise, we argued that separated minors who likely have little genetic literacy would not be able to provide appropriate informed consent, potentially even with adult supervision. Finally, no person should be coerced into a genetic test for reunification purposes under such a state of duress. Given that position, I offer the following suggestions to the incoming Biden-Harris administration to reduce the harm if the US government continues with its policy.

Any person should have the right to refuse a DNA test without harm to their immigration status or case and should be presented with other options, even if that extends their case review time. Consequently, any minor separated from their guardian should not be coerced to take a DNA test by any third party in the absence of their legal guardian.

If an individual is asked to take a DNA test, they should be provided meaningful informed consent by a bilingual third-party nongovernment scientist or health care professional trained in delivering informed consent and the risks of providing genetic biodata.

If the government insists on using DNA tests for family identification or reunification, it should be used for that purpose exclusively. Furthermore, if a DNA test is administered, it should only be used to verify family relationships where all parties have agreed to be tested. Finally, if a DNA test proves a familial relationship, the family should be reunited, and the DNA sample and derived data destroyed.

Protecting a person’s agency, providing meaningful informed consent, and ensuring their privacy is protected should be considered a prerequisite for the use of any DNA testing, especially in the context of compulsory testing for use in immigration.

The incoming Biden-Harris administration should reverse the inhumane border practices of the Trump administration as quickly as possible, and ensure no more harm to immigrants. No person should ever be coerced into taking a DNA test, especially not separated minors.

Matt Artz is an anthropologist, designer, and strategist working at the intersection of user experience (UX), service design, and product management. Matt is also the creator of the Anthropology in Business and Anthro to UX podcasts, as well as the host of other podcasts created in partnership with the American Anthropological Association, the Royal Anthropological Institute, EPIC, and the LiiV Center. You can follow Matt on LinkedIn, Twitter, Instagram, Spotify, and Google Scholar.