A key tenet of the ALLA’s mission is to enable a sustained diverse analysis of contemporary issues facing Latinx communities in the United States and those with whom they share common experiences, histories, or languages. This year’s community engagement event, Latino/as in the Silicon Valley: Ongoing Struggles for Equity and Social Justice, will be held in conjunction with the School of Arts and Culture at Mexican Heritage Plaza, located near downtown San José and flanked by the predominantly Latino/a Mayfair neighborhood. 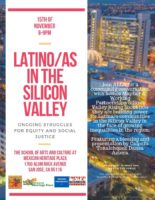 The event will feature community advocates from two organizations working to address systemic inequalities that affect working-class communities even as the wealth of the Silicon Valley region grows. SOMOS Mayfair is a grassroots nonprofit organization that supports children, organizes families, and connects neighbors to address issues affecting the Mayfair neighborhood.

Working Partnerships USA is a broad-based community organization that leads campaigns for healthy communities and equitable growth throughout the Bay Area. Given our collective research interests and desire for meaningful collaborations and research accountability, this event invites ALLA and all participants at this year’s AAA Annual Meeting to learn about some of the most pressing issues facing Latino/as in San José. Ideally, participants at this community engagement event will learn how they can support the initiatives of the featured organizations.

We have a wonderful panel of local activist and advocacy organizations who partnered with ALLA to make this special event possible. It will also feature a Native blessing and presentation by one of the longest standing Danza Azteca groups in San José, Calpulli Tonalehqueh.

The Association of Latina and Latino Anthropologists is pleased to announce the 2017–2018 ALLA Book Award recipients. Alex E. Chavez received top honors for his lyrical ethnography, Sounds of Crossing: Music, Migration and the Aural Poetics of Huapango Arribeño. The selection committee offered their commendations:

Chavez’s text is participant music-making and fantastic anthropology in the making. From northern Indiana, to Mexico City, from Austin, Texas, to recording studios, Chavez documents the cultural life of how brown folks mobilize huapango arribeño. Through it, they “claim a place in the space of the US nation-state; they refigure the borders of citizenship and alienage through embodied and agentive forms of cultural expression”; they live its “subversive potential.” The text sings in its rich complexity theoretically sophistication, and deep engagements with anthropological literatures. Moreover, Chavez captures how hupango disrupts inter-community tensions, such as between Tejanos and immigrant communities, a tension that hails work of Américo Paredes and the deep tradition of Mexican balladry. The form reverberates against the anti-immigrant sentiment of today, revealing the links between contemporary bigotry and imagined narratives of Mexican fatalism, found once among the elite Mexican intelligentsia and ricocheting through the neoliberal Obama presidency.

Carlos Vélez-Ibánez received an honorable mention for his sweeping historical ethnography, Hegemonies of Language and Their Discontents: The Southwest North American Region Since 1540:

Vélez-Ibánez’s text underlines the manner in which gender, race, and class emerge out of local and global processes. The book emphasizes that from the Spanish era to the United States invasion, to the new reach of the Mexican state in the Southwest North American Region, languages and their ideological constructs were imposed upon resident populations in complex “hydra headed” approaches to the negotiations, accommodations, and resistances. Revolts, hybridities, and other kinds of recalcitrant inventiveness are the result, “spiced by spaces and places” for experimental and discontent “translanguaging.” No hegemony is complete, in the best of the Gramscian tradition.

Aimee Villarreal has been practicing anthropolocura in her hometown of Santa Fe, New Mexico for over a decade. Her research focuses on immigrant rights activism, sanctuary cities, and transnational religious movements. She is currently assistant professor of Mexican American studies at Our Lady of the Lake University in San Antonio, Texas.