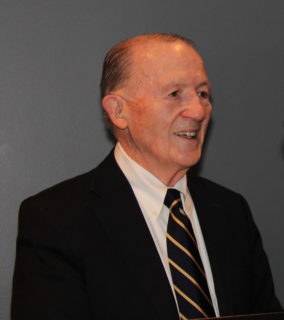 William S. Simmons, professor of anthropology at Brown University, passed away on June 2, 2018.

Simmons (or Bill, as most knew him) was born on September 10, 1938 in Providence. He earned a BA cum laude with highest honors in human biology from Brown University in 1960, and master’s and doctoral degrees in anthropology from Harvard University in 1963 and 1967. He joined the Anthropology Department faculty of the University of California, Berkeley in 1967, where he was appointed department chair, director of the Center for the Teaching and Study of American Cultures, and dean of the Division of Social Sciences. In 1998, he returned to Brown to serve as provost and executive vice-president. During the next 20 years, he served as senior vice president for academic outreach and affiliated programs, acting director of the Center for the Study of Race and Ethnicity and Haffenreffer Museum of Anthropology, and chair of the Anthropology Department.

As an undergraduate, Simmons was mentored by J. Louis Giddings, the first director of the Haffenreffer Museum, and was invited to participate in Giddings’s archaeological projects in Alaska. The relationship was the start of his involvement with the museum, and broadened his interest in archaeology beyond his beloved Rhode Island. During his distinguished career, he conducted ethnographic research on the Badyaranke of Senegal, and mostly in Native American communities in New England and California on religion and folklore. Among his publications, his book, Spirit of the New England Tribes: Indian History and Folklore, 1620–1984, is widely recognized for its impressive blend of good anthropology and sound historical scholarship, and for pioneering Native-centered interpretations as counterpoints to colonialist narratives. In his 1987 presidential address delivered to the American Society for Ethnohistory, Simmons said that what he found exciting was “to connect the historic record with the ethnographic present” by drawing on as many kinds of testimony as possible—material, visual, and written—and by hearing the voices of ancestors speaking through the current generation as he listened to them recount their own experiences in making their way through the contemporary world. To Native people, he was a gentle spirit, gifted storyteller, and generous person who will be missed, as he is by his students, who knew him as an inspiring teacher, caring mentor, and welcoming presence with a wonderful sense of humor. To his colleagues, he was respected as a tireless scholar, skilled administrator, and moral compass.

Bill Simmons’s passionate dedication to anthropology’s holistic approach to the study of cultural diversity and to social justice was matched by his commitment to serving the wider community. He was a trustee of the Providence Public Library and Rhode Island Historical Society, and board member of numerous organizations, including the Providence chapter of the National Association for the Advancement of Colored People that awarded him the prestigious Roy Wilkins Award for Social Justice in 2006. He will be remembered not only for his professional accomplishments, but also for his feats as a high school track star, his cowboy boots, the conversations on walks, road trips, and over coffee, and his humanity. (Patricia E. Rubertone)

As an undergraduate at UC Berkeley in the 1960s, I took a class on “Anthropology of Religion” with Bill Simmons. I didn’t realize it at the time, but that may have been his first year at Berkeley. I recall him as a bright, young, enthusiastic instructor, and I learned much from his class that I have used throughout my career in teaching religious anthropology to others.

Two memories in particular stand out. One is his characterization of Sir James Frazer’s Golden Bough as “the longest book ever written.” (As I tell my students, he didn’t say it was the best!) The other was a story he told us after he returned from a break that he spent somewhere in New England. He got a traffic ticket in a small town and decided to contest it in court. When the day arrived, the judge asked about his current employment, and he said he taught anthropology at the University of California, Berkeley. The judge proceeded to inquire, “Is that an accredited institution?”

In the end, Bill wrote a recommendation in support of my application for the grad program at the University of Chicago and was, thus, a cornerstone of my career.

Bill was one of the last remaining instructors from my Berkeley days. He’ll be missed!!