Do you have an event you’d like to announce? A call for papers for a conference? Email all details to [email protected].

The American Association for the Advancement of Science (AAAS) Section H is proud to announce the inaugural Robert W. Sussman Award for Scientific Contributions to Anthropology. As you all know Bob Sussman embodies the science and spirit of Anthropology. From fieldwork on lemurs to human biology to deconstructing the evils of race, his legacy of mentorship, caring, and dissemination of knowledge will be with us forever.

This award recognizes meritorious scientific contributions to the field of anthropology by mid-career anthropologists. AAAS Section H members are encouraged to nominate candidates they feel exemplify the ideals of this award. Nominees do not have to be members of AAAS (though nominators do). Criteria and procedures are described in the attached document.

Nominations and questions should be sent to Section H Secretary Dr. Karen Strier at [email protected]. Deadline for nominations is APRIL 30, 2017.

The Parkes Foundation is pleased to announce the inaugural Geoffrey Harrison prize lecture on human/biosocial sciences.

The Prize Lecture is to be awarded annually in Geoffrey Harrison’s honor to persons who have made a substantial and sustained contribution to the study of human biology and especially biosocial sciences.

The closing date for nominations is Friday 2nd June 2017. The lecture will take place on Friday 3rd November 2017 followed by a drinks reception at the Oxford University Museum of Natural History. The Parkes Foundation will contribute to travel and accommodation of the Geoffrey Harrison Prize Lecturer.

Honoring Service in promoting Public Understanding of Science and Engineering

THE NATIONAL SCIENCE BOARD HAS EXTENDED THE DEADLINE FOR NOMINATIONS FOR ITS 2018 HONORARY AWARDS UNTIL OCTOBER 10, 2017.

The National Science Board is pleased to accept nominations for the Public Service Award, which honors individuals and groups that have made substantial contributions to increasing public understanding of science and engineering in the United States. These contributions may be in a wide variety of areas that have the potential of contributing to public understanding of and appreciation for science and engineering—including mass media, education and/or training programs, and entertainment.

Candidates for the NSB Public Service Award should have demonstrated outstanding leadership and accomplishment in meeting the following selection criteria:

Please note that Members of the US Government are not eligible for this award.

Nominations for an individual must include:

Nominations for a group must include:

Reference letters are optional, and up to 3 letters (no more than to 2 pages each) may be submitted on letterhead as a PDF file.

THE NATIONAL SCIENCE BOARD HAS EXTENDED THE DEADLINE FOR NOMINATIONS FOR ITS 2018 HONORARY AWARDS UNTIL OCTOBER 10, 2017.

The National Science Board is pleased to accept nominations for the Vannevar Bush Award. The Vannevar Bush Award honors truly exceptional lifelong leaders in science and technology who have made substantial contributions to the welfare of the Nation through public service activities in science, technology, and public policy. The award was established in 1980 in the memory of Vannevar Bush, who served as a science advisor to President Franklin Roosevelt during World War II, helped to establish Federal funding for science and engineering as a national priority during peacetime, and was behind the creation of the National Science Foundation.

Candidates for the Vannevar Bush Award should have demonstrated outstanding leadership and accomplishment in meeting at least two of the following selection criteria: 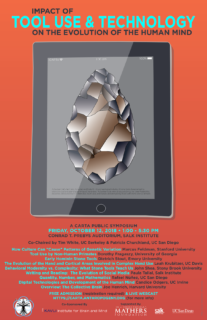 Join the live webcast! “Impact of Tool Use and Technology on the Evolution of the Human Mind” is the topic of a free public symposium hosted by the UCSD/Salk Center for Academic Research & Training in Anthropogeny (CARTA) on Friday, October 12th (1:00 – 5:30 pm PT), co-chaired by Tim White (UC Berkeley) and Patricia Churchland (UC SanDiego)

We “behaviorally modern humans” likely emerged more than 100,000 years ago in Africa, spread across the continent and eventually the planet, effectively replacing all closely related and potentially competitive species.  There are many possible explanations for this, but one key to our consistent success in such replacement was the ongoing co-evolution of the human brain/mind with tool use and technology that actually began much earlier – all the way back to the use of simple stone implements millions of years ago – and continues with computers today.

Nine experts in the field will address this important gene-culture co-evolutionary process in anthropogeny at all levels, beginning with the potential link between early stone tool use and the parallel expansion of the human brain.  We’ll explore humans’ control of fire and the invention of projectile weapons, all the way through reading and writing to current-day technologies such as computers and 3D reality, as well as look to the potential future of the human mind under the impact of continually evolving culture.

Comparisons with other living and extinct species will be made, and we’ll touch on other relevant cognitive features unusually well-developed in humans, such as language, theory of mind and cooperation.

Join us to explore answers to a question first posed by Alfred Russel Wallace: How did the human mind originally evolve such remarkable capabilities in Africa, ‘in advance of its needs’? After all, even today no human is born with the genetic capability to make even simple stone tools! 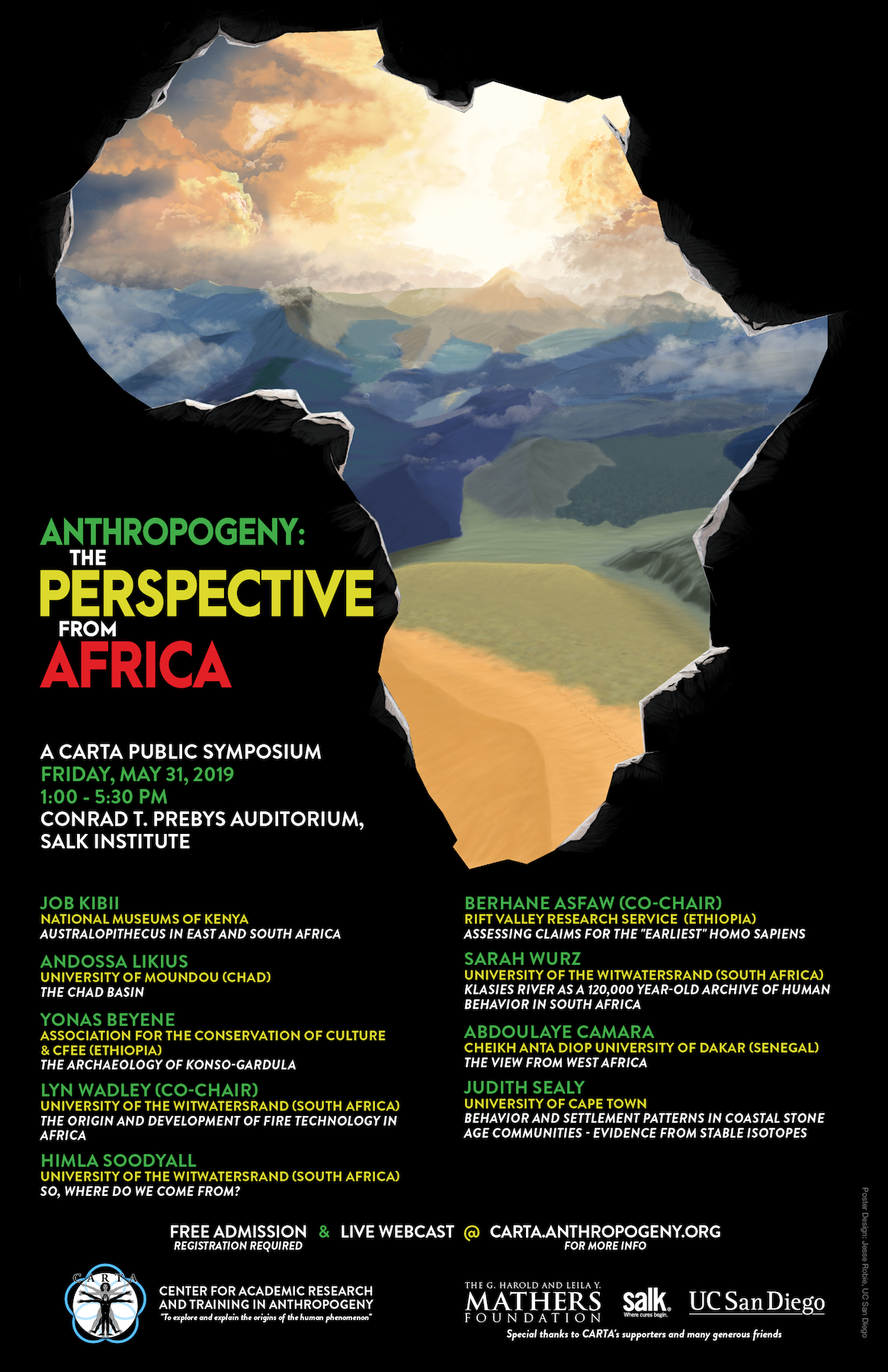 Join the live webcast! “Anthropogeny: The Perspective from Africa” is the topic of a free public symposium hosted by the UCSD/Salk Center for Academic Research & Training in Anthropogeny (CARTA) on Friday, May 31st (1:00-5:30 pm Pacific), co-chaired by Berhane Asfaw (Rift Valley Research Service, Ethiopia) and Lyn Wadley (University of the Witwatersrand, South Africa)

Darwin and Huxley first predicted that we humans shared a common ancestor with the African great apes and it is now abundantly clear that Africa was the “cradle of humanity,” with multiple waves of hominins arising on that continent and spreading across the old world, eventually being effectively displaced by our own species, which also arose in Africa.  As Svante Pääbo put it, “we are all Africans, either living in Africa or in recent exile from Africa.”  Given these facts, it is not surprising that the strong emphasis of anthropogeny is on the continent of Africa with studies ranging from genetic to paleontological to archaeological to primatological to climatological to sociocultural.  This CARTA symposium focuses on the contributions of scientists and scholars of anthropogeny who live and work in Africa.