An Anthropologist in Silicon Valley

Reflections on a career tackling some of the critical workplace challenges of our time.

Emily TheissenI could not have imagined when I entered the PhD program in anthropology at the University of California, Davis in 1973 that I would spend my career working as an anthropologist in Silicon Valley. I have always liked technology and did well in math and science, but to work alongside physicists, chemists, mathematicians, computer scientists, and engineers for the better part of 40 years—really! Perhaps unknowingly, I was preparing for this career path when in 1981, I programmed a Radio Shack TRS-80 microcomputer to analyze temperature and airflow data from my parents’ newly built passive solar house. Perhaps Laura Nader’s (1972) call for anthropologists to “study up” began to resonate even more with me as I recognized the potential of computer technologies to change the way we worked and lived.

As I neared completion of my PhD, the warning that many others and I received in our acceptance letters, that there was no guarantee an academic job would await us upon graduation, began to sink in. Hoping to stay in California, I scurried around looking for ways to stay local, eagerly jumping at the chance to teach courses for professors on leave, all the while knowing that was not a viable long-term strategy. I also started to look for opportunities outside the academy and as luck would have it a handful of anthropology students from the University of California, Berkeley had already made the trek to Silicon Valley to study “the office of the future.” Sponsored by Xerox, these summer interns were asked to explore how work and workplaces were going to change with the introduction of personal computers and local area networks. Not long thereafter, two Berkeley PhD students, first Eleanor Wynn and then Lucy Suchman, arrived to undertake dissertation research at Xerox PARC on office conversation (Wynn 1979) and human-machine communication (Suchman 1987; 2007). So, my arrival at Xerox PARC in 1982 was not unprecedented although still highly unusual. Suchman was my guide and mentor in my early days at PARC and later, joined by fellow anthropologists Brigitte Jordan (2013) and Julian Orr (1990), she led the Work Practice and Technology group where I stayed until 2000. I departed Xerox PARC to become the director of experience modeling at Sapient, a business and technology consulting company. But the Sapient job went the way of many others as the dot-com bubble burst and I returned to corporate research in 2002—this time at IBM’s Almaden Research Center in San Jose, California, another iconic corporate research lab that had Nobel prize winners among its ranks, and where for a time anthropologist Melissa Cefkin (2009) was my colleague.

What has kept my attention, fueled my intellectual interests, and allowed me to endure, even prosper, as the odd person out during the last 36 years—after all, my colleagues are still primarily physicists, chemists, mathematicians, computer scientists and engineers? My response to this question requires a brief and partial tour of some of the intellectual terrain I’ve explored as an anthropologist in Silicon Valley. Along the way, my research has allowed me to disrupt normative views of work and workplaces and to nudge corporate imaginaries—in small but still important ways—toward consideration of a broader range of human experience.

Office automation was at the forefront of the concerns of tech companies and corporations in the 1980s, with the prevailing view that technology would soon be able to perform “routine” office tasks or those not requiring human judgement. Conversely, it was thought that the tasks of “knowledge” workers would not be so easily automated—this goal would have to wait for further advancements in artificial intelligence (more about this below). A study of the document work practices at a Silicon Valley law firm offered my colleagues and me the opportunity to challenge existing stereotypes about what constituted routine work and knowledge work and which jobs were suitable for automation. We were able to show that the work of document coders, viewed as relatively low-skill work, in fact required a great deal of human judgement and benefited from the coders’ accumulated knowledge of the particulars of the legal case at hand. Instead of automating work, we proposed that it would be more fruitful to think about ways of integrating “bits of computation,” while supporting the knowledge-dependent aspects of their work. We showed that human judgement was required for the most routine tasks and that even in the work of attorneys, so-called knowledge workers, repetitive and mundane tasks were part of the job (Blomberg et al. 1997). Tech companies would need to rethink whose work afforded opportunities for automation and what it would take to align and integrate computational technologies with work practices where human judgement is always present.

When I arrived at IBM Research in the early 2000s, the world had changed yet again. Globalizing markets, the availability of skilled workers worldwide, the outsourcing of non-essential services, and increases in mergers and acquisitions all encouraged efforts toward enterprise transformation. There was a major push to standardize work and business processes as a way to integrate across the global enterprise where differing local histories and economic contexts challenged the unification of shared corporate objectives and ways of working. The aim was to make it easier to shift work as demand and access to skilled workers fluctuated. The global rollout of a “new model of work” to be adopted by workers at technology delivery centers around the world provided an opportunity to explore how work standards are variously adapted, resisted, and integrated into diverse organizational, socioeconomic, and cultural contexts. Our research concluded that the push to standardize work, driven by the desire to align tools and process across the enterprise, demanded consideration of the myriad ways local work sites were required to modify and adapt the standards to align with their everyday realities. We demonstrated how the imposition of top-down ways of working led to processes ill-suited to local contexts and a tendency to disempower employees. Instead, we argued for greater flexibility in ways of implementing the new work standards and for taking advantage of local innovations that were occurring across global delivery centers (Blomberg 2011).

As it was when I first arrived in Silicon Valley, the time-honored refrain, “people are resistant to change,” was still being voiced in 2010. I was told that people like things the way they are and it would be necessary to bring them kicking and screaming into the modern world. “It’s not our technology that’s the problem, it’s the unwillingness of people to change.” For me as an anthropologist, this kind of pre-packaged explanation demanded scrutiny; people might have good reasons for embracing or not embracing this or that new technology. So, when a business division needed help with adoption of a new workflow technology, I jumped at the chance to take a closer look.

When I entered the project, the business division’s position was that workers were unwilling to change how they worked so management would have to compel them to use the new tool. We cautioned that there likely were other explanations for workers’ resistance to the workflow tool and that forcing its use could backfire. Our study of intended users’ work practices showed that the tool provided little benefit to them—all the benefits were to be accrued by others in the organization, not those who were asked to change how they worked. With the workers’ participation, we enlisted our computer science and engineering colleagues to design a dashboard technology that analyzed and presented the workflow data in a way that was useful to tool users. Increased adoption of the workflow tool quickly followed and downstream coworkers were soon able to rely on reports generated from the workflow data. In the end, it wasn’t workers’ resistance to change at issue, but their resistance to being asked to do extra work that yielded little or no payback.

Now, in 2018, we find the world abuzz with the possibilities for artificial intelligence (AI) to transform work in such fields as health care, agriculture, and education. It feels a bit like a return to the 1980s, only now with advances in AI, knowledge work is in the sights of those who are pursuing an automation agenda. The mantra now is that smart machines will be able to perform tasks that require human expertise, knowledge, and judgement. 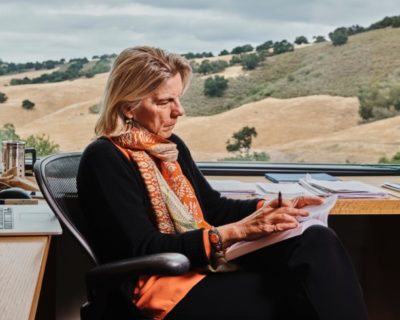 Jeanette Blomberg at work in her office. Cait Oppermann

I’ve had a chance to revisit the question of what it will take for machines to replace the things workers do as efforts are underway in my organization to design a cognitive tool ostensibly capable of performing the tasks of highly skilled workers who design IT infrastructure solutions for client organizations. Expectations vary about what this cognitive tool will be able to do. At one extreme, a push-button tool will read clients’ “request for service” documents on the front end and create contracts for clients to sign on the back end. A more modest view proposes that the tool will augment human capabilities by doing some of the tasks of these skilled workers, while recognizing that people will still be required for some aspects of the work. While this project is still underway, we’re (re)learning that it’s not so easy to isolate and extract the work to be automated from all the things required to get the work done, in this case design IT infrastructure solutions. Designing cognitive or AI-enhanced technologies is not simply about automating detached work tasks, but about enabling the alignment and integration of what humans do best with what machines are capable of doing. This project is helping inform the development of a “cognition in practice” framework for the design of AI-enabled technologies that recognizes that human cognition is embodied and that augmenting human intelligence with machine capabilities depends on the everyday work practices that align humans and machines. Without such an alignment, advances in predictive analytics, deep learning, and conversational interfaces—the tools of AI—will not deliver the hoped for benefits for workplaces or society more generally.

Dig where you stand

Throughout my time working as an anthropologist in Silicon Valley, I have frequently been asked how I have managed the ethical challenges posed by working for two of the world’s largest corporations. While not without its compromises, my work has given me the chance, paraphrasing historian and labor activist Sven Lindquist (1978), to “dig where you stand.” I have looked for opportunities to change corporate views about work and workers, to highlight the importance of the intricacies of everyday practice, to underscore the value of empirical investigations, and to emphasize the enduring symbiotic relationship between humans and the artifacts they make. It has been a complicated and sometimes tricky ride, but the opportunity to weigh in on some of the major workplace challenges of our time continues to be highly rewarding.

Jeanette Blomberg is Distinguished Research Scientist at the IBM Almaden Research Center in San Jose, California. Her current research focuses on organizational analytics where she considers the linkages between human action, digital data production, data analytics, and business and societal outcomes. She received her PhD in anthropology from the University of California, Davis.

Emily Thiessen is an anthropology student at the University of Victoria, an occasional illustrator, and a community organizer with a fire for creative troublemaking. You can see more of her work at emilythiessen.ca or @archipelagic on Instagram.