Andrew P. “Pete” Vayda, a leading scholar in human ecology and ecological anthropology, died peacefully on January 15, 2022, at his New York City home. Vayda was a distinguished professor and interdisciplinary researcher, as well as a passionate foodie, traveler, and lover of life. He will be remembered for his wit, irreverence, zest for intellectual engagement, role as beloved father and grandfather, insatiable curiosity about “why questions,” and fierceness on the squash court.

For over sixty years, Vayda conducted research in New Zealand, Polynesia, New Guinea, and Indonesia. He was distinguished professor emeritus of anthropology and ecology at Rutgers University (1972–2002), where he founded the Department of Human Ecology, and tenured professor at Columbia University (1960–1972). He taught courses at numerous other European, North American, Australian, and Indonesian universities. From his Rutgers retirement until his death, Vayda was an independent scholar, adjunct professor, and senior research associate at the Center for International Forestry Research (CIFOR).

Vayda’s career encompassed historical, anthropological, ecological, and philosophical research. He developed a question-based approach to inquiry that makes causal explanation of events, including human action, the goal. It was first articulated in 1983 as “Progressive Contextualization,” then refined as “Event Ecology” and “Abductive Causal Eventism” (ACE). Vayda was also known for his criticisms of others’ work for failures of causal reasoning and explanation, and for generalizing and theorizing without adequate evidence. His published works include some hundred articles, three books and four coedited books. Vayda was founding editor of the journal Human Ecology.

Born in Budapest, Hungary, Vayda came to the United States with his mother at the age of seven. He completed his BA and PhD in Anthropology at Columbia University. Vayda’s dissertation described Maori warfare before alteration by European weapons and ways. The resulting book, Maori Warfare (1960), became a classic. He joined Columbia’s faculty in 1960, conducted extensive field work in New Guinea, and wrote articles interrelating war, economics, and ecology.

By the early 1970s, Vayda was disillusioned with neo functionalist theory, which looked for big ideas to explain cultural similarities and differences and pervaded the Columbia anthropology department. He left Columbia in 1972 for Rutgers, with a mandate to integrate social sciences and humanities with the biological and agricultural programs of the College of Agriculture and Environmental Sciences. Vayda initiated a multisited, multidisciplinary research program on peoples’ interactions with Indonesia’s tropical forests. Over the next 30 years, he worked with UNESCO’s Man and the Biosphere program, the University of Indonesia, CIFOR, and others on topics like the causes and consequences of forest and peat fires, integrated pest management and deforestation.

A festschrift in Vayda’s honor, Against the Grain: The Vayda Tradition in Human Ecology and Ecological Anthropology, was published in 2008. Explaining Human Actions and Environmental Changes, a selection of his essays, was published in 2009, and Causal Explanation for Social Scientists: A Reader (coeditor), came out in 2011. In December 2021, Human Ecology published a tribute to Vayda on his 90th birthday.

A man with white hair, glasses, and a beard is standing before a backdrop of clouds.
Credit: Andi Vayda 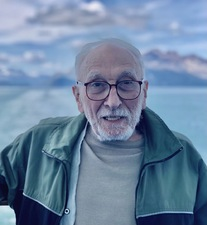