At The End of the World

Growing up abroad on military bases, I recall how some of the GIs would talk about “going back to the World,” as their tours in Europe were about to end. By “the World,” they meant the United States. Looking back on this, I see that this was a reference to geopolitical notions of centers and peripheries—of first, second, and third worlds. If you weren’t in the US, you were nowhere. The turn of phrase keeps returning to me these days. I live near the northern border of the United States, about 30 miles from Canada. Almost every day for the last two years, people have been leaving the World, for Canada with the hope of finding a better life. They have crossed by the tens of thousands (over 37,000 in 2017 and 2018, and in the first two months of 2019, over 1600) at a remote, unsanctioned, “dead-end” road. 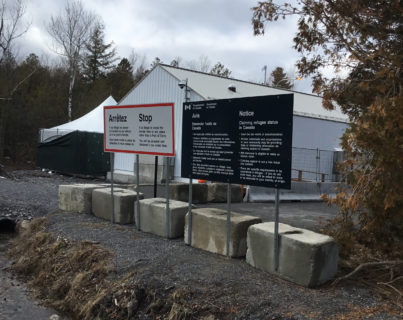 Signage at the unsanctioned border crossing in French and English let asylum seekers know that it is illegal to cross and that asylum is not guaranteed. April 2019. Amy Mountcastle

What’s going on here? Who are these people, where are they from, and why are they leaving? What are their stories? These are questions that several of my colleagues and I are working on. But for now, I would like to paint a picture of what I have been observing in this border area since October 2018.

The crossing lies on a dead-end road located seemingly in the middle of nowhere. Several decades ago, the road did not come to a dead end; it extended across the borderline, suggesting a much more fluid and porous borderlands area. The road still carries the same appellation on both sides of the border, but now, it has been disrupted—some wild vegetation, broken branches, a scattering of large stone slabs strewn parallel to the roadway, a visual and symbolic barrier that strikes me as halfhearted. A large ditch cuts across the road, and in April, the frigid, melting runoff of a long northern winter courses through. There is one possible cross-over point.

At this cleavage, facing north, you see a metal clad building replete with a handicapped-accessible ramp. This is where the Royal Canadian Mounted Police await the new arrivals. When they see unfamiliar vehicles, taxis, private cars, Ubers and Lyfts, two or more officers come out to the lone pillar that marks the border line. A sign in French and English faces south, informing readers that this is not a legal border crossing and that stepping across the line will result in their arrest. Another sign explains some of the realities of making a refugee claim in Canada. The Mounties stand ready.

A 15-foot-long (5 meter) strip of earth, a kind of land bridge, is situated at the west side of this fractured interface between the United States and Canada. People stand at the edge of it before crossing, teetering on the ice while the Mounties explain the arrest procedure that awaits them if they decide to continue on the dirt path. They stand there with enormous suitcases whose wheels cannot run smoothly on ice, rocks, and dirt. Or they stand there, their worldly possessions crammed into a day pack, struggling to stay upright, to stay emotionally intact, to keep their children close at hand. Who are they? This is not an easy question to answer. They are all people seeking asylum and refuge in Canada, but their experience and origins are varied. One interesting fact: they are typically people who have some kind of legal status in the United States, in the World. Some have been longtime residents of the United States, including green card holders and people with temporary protected status. Standing at the edge of the World, looking across this little runway to the other side, they quietly confide that they no longer feel safe, welcome, or secure in the United States. The national rhetoric has made them insecure or frightened. Others arrive to the United States on tourist visas, but they don’t go sightseeing; they immediately make their way north. One such woman shouted in despair at the Mounties, “I’m running for my life!” And still others are surely individuals without documented status, recently released from detention centers in the South. They come by plane, train, and bus. At the bus stand, a small cadre of cabbies, following the bus schedule, awaits.

The cabbies witness this exodus from the World almost everyday. The word is out about which drivers to call, which are honest and which are helpful. It seems that there is a pretty good communication network that guides people from a number of different countries to this small northern town and to the cab drivers who have seen a boom in their business in the last two years. 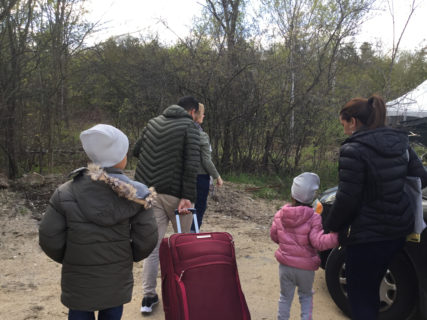 A family has disembarked from a cab and walks to the cross-over point. The children wear hats given by a local woman (front of the group) who here, shows the party where they must go. Amy Mountcastle

At the border, a local woman has made it her work to offer a kind word and friendly face, as well as hats, gloves, scarves, and coats in winter, to the asylum seekers as they exit the cabs. She’s been doing this work for two years and I have been joining her once a week for about eight months now. We talk to the drivers. There is friendly banter and also some serious talk. “This is not the America where we used to live,” a cab driver said one day. Everyone nodded in agreement, as if we knew what he meant. But it does bear asking, what was that America to which he referred and to what did we readily assent? Perhaps like many others who do not recognize the World, these days, we viewed it as a mythical place; a place that welcomed the multitudes of immigrants who also believed it to be the World and who set their hopes and aspirations in reaching it.

This cabbie has many stories. “Last week, I drove a woman up here. She had two small children and a small baby and so much luggage. I said, how you going to carry all this plus kids and baby? She had so much stuff. But she couldn’t get rid of it, so she brought it with her. But then, she…she didn’t listen to me and she went across and she didn’t have the baby with her. The baby was in the car, crying. The Canadian police said, no, you can’t go back—the baby is not coming with you. They told her, the baby is not coming to Canada. I said, what am I gonna do with this baby? They said, it’s your baby now.”

The mother was naturally distraught. The cabbie spent the next three hours trying to figure out a solution. He called someone in charge whom he knew at the main US border crossing. That border officer eventually came out and working with or around the Mounties, allowed the cabbie to carry the baby over the border to its mother and then return to the United States. How important these human touches are, especially in this harsh political landscape, where migrating people around the world are being demonized.

Cab drivers sit at the interstice of the worlds in which their passengers find themselves—between a world that has become untenable, insecure, and perhaps terror-filled and a world, unknown, also frightening, but in which their hopes now lie. Their personal responses to the crisis and to the people who enter their cabs is not inconsequential. They bear witness; they speak with the people who are staking everything on this journey. The issues of race, class, and gender, of the forces of global capitalism, of exclusion and inclusion, all coalesce in the space of the taxi cab. The cabbies seem to understand how national and global forces are coming together to drive people away from their homelands. They understand that the policies of intolerance, the rhetoric of fear that is being drummed up by the politicians, are not humane. Do people deserve to be granted citizenship or a path to citizenship? These were not the debates that the cab drivers engage in when they deliver people to the border. What they attend to are the practical matters of helping their passengers to disembark with their bulging luggage, their children, their babies and to cross into Canada safely.

“Think about this…this is happening every single day all over the world,” the cab driver says as he reflects on the cruel and inadequate political responses to the crises that drive people to make these fraught and perilous journeys. “Every single day, many times a day…We have to take care of these people, we have to do this.”

Amy Mountcastle teaches at the State University of New York-Plattsburgh and received her PhD from Rutgers University. She is interested in human rights, refugees, and exiles and in how people navigate between old and new identities and ways of being in the face of voluntary and involuntary transitions.