By Alice B. Kehoe

CSAS once offered emerging and established anthropologists a place to find community and develop professionally. A century after its founding, the pandemic and our virtual working patterns have changed all that.

In 1922, a group of anthropologists in the area we now call flyover country, gathered in Chicago’s Field Museum to inaugurate an annual conference in the region between the Appalachians and High Plains. They had asked to be a Section of the American Anthropological Association (AAA), at that time a new concept for the organization. Travel then was by train, incurring at least two to three days to reach meetings on either coast, where most of the AAA meetings were held. There were few graduate programs or undergraduate majors in anthropology. Long-distance telephone was prohibitively expensive. Postal mail was the only means of carrying on collegial relationships, other than professional scholarly meetings.

Central States Anthropological Association (CSAS) meetings were scheduled for spring, complementing AAA’s annual fall meeting. From 1937 to 1958, the Society for American Archaeology met jointly with CSAS. In the later twentieth century, up to 300 professors and students from the four fields attended CSAS annual meetings. CSAS became the meeting where advanced graduate students and new PhDs, myself included, made their first professional presentation.

Outline of a hand made in mica with the letters “CSAS” stretched across the palm.
Credit: Created for CSAS by Justine Cordwell 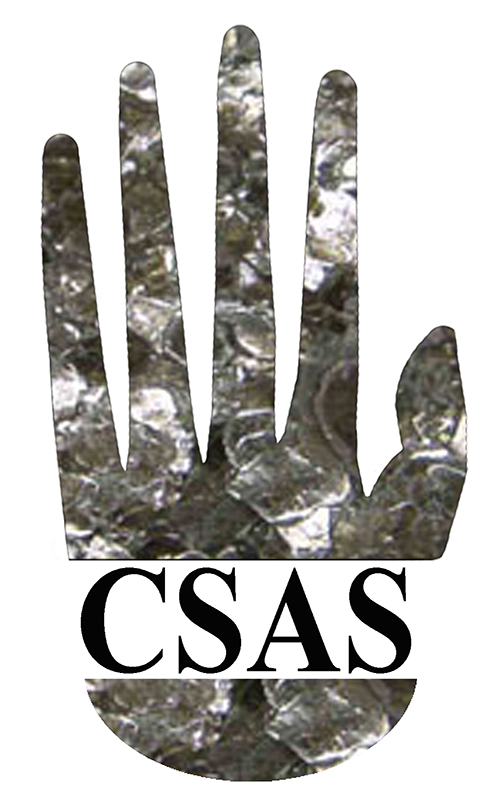 In the present century, competition for grants as factors in hiring and tenure, increasing cuts and changes in anthropology programs, and the need for many to juggle adjunct gigs at several institutions, have overburdened faculty. Participation in major national meetings versus regional meetings count more in hiring and tenure. CSAS could not sustain the AAA’s requirement of a minimum of 225 members to remain a Section. Mismanagement of the 2018 and 2019 CSAS meetings put the Section into debt, the 2020 meeting was cancelled due to COVID-19, and in 2021, a century after the call for its creation, AAA cut CSAS. Sad.

In-person meetings resumed at the end of 2021. Both the national AAA, and the regional Plains Anthropology Society conference that I attended had fewer than half the usual people. Halls and rooms were half empty. What one saw were clusters, people who already knew each other rather than encounters within crowds. Virtual presentations were huge faces whose voices echoed confusingly in cavernous rooms with sometimes only two people in them. In contrast, Central States held its 2021 spring meeting entirely via Zoom, hosted by James Stanlaw at Illinois State University, with up to 68 viewers for sessions over two days. Attendance was free. As with so many Zoom lectures, participants and viewers were geographically diverse, including attendees from Europe, Asia, and Latin America in addition to North America. We didn’t know many of these new participants, nor could viewers easily follow up with others who shared their interest in a presented topic. No sitting down with a coffee or beer after a session. No greeting later in the day or at breakfast. A gutted cultural pattern.

COVID-19 broke that pattern of work and of social interactions. Offices and classrooms often were empty. For two years and ongoing, everyone seems to be at home nearly all the time. The Industrial Revolution broke the common space of home and workshop; the internet snapped that dichotomy. The internet daily carries to our inboxes messages from colleagues, significant papers, sets of data. We sit physically alone, maybe the cat checking in, conversing in our invisible colleges. As anthropologists, we must dispassionately observe the new world, what endures and what is radically changed.

For those of us in flyover country, Central States losing its place in American anthropology forces us to reassess our memberships. Lots of grumbling: What does AAA do for me? For years now, the Society for American Archaeology has been the principal professional organization for archaeologists, and this has clearly allowed a technique and technology orientation to flourish while anthropologically oriented outlooks diminish. The Society for Applied Anthropology appears to have more overlap with AAA; Elizabeth Briody as immediate past AAA secretary has been vigorously pushing that. Public outreach is demanded by employers whether institutions or businesses––and the difference has often become difficult to detect. Anthropologists of all sorts find themselves in new arenas, with new audiences and new expectations. We sit in our office chairs, our bodies far from colleagues while our screens light up with their faces. We are in a common room with bookcases behind us, theirs and ours, signaling that we are scholars. Our principal joint concern is open access. Old commonplaces are broken.

There is a song called “Zoom Revolution.” Its video is simply a black threat wearing a gas mask.  It could be a dirge for the Central States Anthropological Society. Perhaps when adjustments to the pandemic permit universities to reopen conference facilities, we who are now the unofficial board of a nonextant organization could again schedule get-togethers for anthropologists within driving distances. Whether advanced grad students and new PhDs would see these gatherings as their rite of passage, I doubt. The torch to hold aloft is now an online publication. The final question is how we gregarious mammals are going to thrive and reproduce after the Zoom revolution.

Alice Beck Kehoe is an anthropological archaeologist, professor of anthropology emeritus, Marquette University. She has been president of Central States Anthropological Society and of the Association of Senior Anthropologists. Her memoir, Girl Archaeologist: Sisterhood in a Sexist Profession, is recently published.