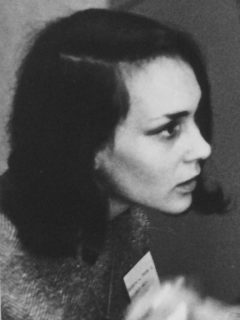 Barbara J. Price, a significant sociocultural theorist and a unique New York personality, died on February 18, 2016 after a long illness.

Ever the iconoclast, famous for acerbic commentaries, Price nonetheless mentored and sheltered dozens of students, pushing them (and colleagues) to sharpen ideas. She especially focused on socio-political evolution, ecological systems, and political economy. After Columbia, she taught at Temple University. In an era (1970s) unreceptive to women scholars, Price did not receive tenure. She was often difficult, quickly prone to explosive responses, but we believe that if she had been a man, her scholarship would have merited tenure at some point. Price, however, never mentioned gender. She continued teaching—adjunct positions at Adelphi University, Columbia University, and Queens College, City University of New York; she spent a year as visiting associate professor at the Sorbonne and a second as Fulbright professor at UNAM, the Universidad Nacional Autónoma de México. She taught at John Jay College of Criminal Justice until months before her death.

Price’s extensive scholarship begins with Mesoamerica and continued through 2003, including “Prehispanic Irrigation Agriculture In Nuclear America” (1971); “The Burden of the Cargo: Ethnographic Models and Archaeological Inference” (1974); “The Truth is Not in Accounts but in Account Books: On the Epistemological Status of History” (1980); “Cultural Materialism: A Theoretical Review” (1982); “Teotihuacan as World-System: concerning the Applicability of Wallerstein’s Model” (1986); and “The Native Aristocracy and the Evolution of the Latifundio in the Teotihuacan Valley, 1521–1917” (with William Sanders, 2003). Although she made significant theoretical contributions to archeology, she considered herself a sociocultural anthropologist.

Tiny in physical stature but “larger than life” in other ways, Price was never timid about expressing opinions. She was chair of the Columbia Seminar on Ecological Systems and Cultural Evolution and usually attended Columbia’s Wednesday seminar, holding court at the post-seminar reception and later at the West End tavern. Former students could find her ensconced, beer in hand, in hotel lounges at the AAA Annual Meetings, creating an informal seminar, now sorely missed. She visited the Metropolitan Opera with an anthropological contingent, and attended all four Wagner Ring operas twice (in the same Family Circle seat) in any season when offered. Extraordinarily well-read in literature, she was a walking baseball encyclopedia, a foodie before that term was in vogue, knew more about wine than most, and frequented food trucks before they trended.

Frail in her final years, Price continued teaching and mentoring but was unable to travel to meetings. Her legacy continues in her publications, her intellectual influence on mentees, and in a bequest to establish the Barbara J. Price Scholarship for entering CUNY BA students in financial need—a manifestation of her deep social concerns.