Close Encounters of the Bird Kind

An unexpected brush with an emu leads to investigative adventures into booming, drumming, and low-frequency sound.

A brazen emu emerged from the scrub, intentions unknown, and began to circle us, pivoting her head often to preserve a radius of about 15 feet. Her gaze alternated between us and our instrumentation, giving us the impression of intense curiosity, although we are trained to never anthropomorphize wild animals. Still, the sight of humans measuring gloaming light is almost certainly a novelty for emus living in Fitzgerald River National Park, Western Australia. We soon grew accustomed to her presence; after all, there was work to do and we needed to focus our attention on data collection. And then the booming started. 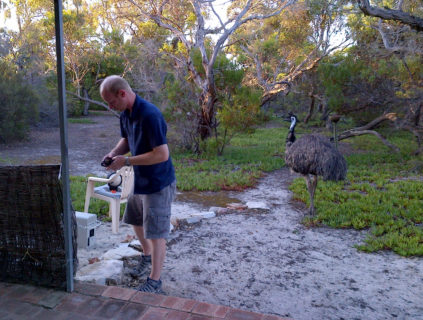 Booming is a low, throbbing sound that one hears and feels, for it has visceral physicality, eliciting the familiar sensations of intense infatuation or motion sickness. It is unsettling and vaguely threatening, not least because the closed-mouth call is associated with an inflated throat pouch or gular sac. The cumulative effect of this display was to sharpen our appreciation of emu size—females are larger than males, weighing up to 130 pounds, and the business end of their beak stands at human eye level. Emus are also equipped with powerful feet and pointed toenails, which they can use to telling effect on people (as emergency room physicians can attest, Jones 1996). So, we were more than a little relieved when she ended her hour-long visit and moved off, apparently satisfied with the encounter.

For whom the belle booms

The interaction was both enchanting and puzzling, at least for us, and it motivated us to investigate the acoustics of emu vocalizations, a surprisingly understudied topic. Scholars have described three types of vocalization—drumming, booming, and grunting—and each is limited to frequencies below 300 Hz (O’Brien 1990; Halkin and Evans 1999; Davies 2002). Yet, we know little about the anatomy of sound production. The trachea has thick cartilaginous rings and a 6 to 8 cm long slit (fenestra) on the ventral surface. Air is directed through this opening and into the gular sac, which expands during booming and drumming. High-intensity booming (60–80 Hz) is a female-specific behavior that is audible to humans from as far away as 2 km (Halkin and Evans 1999). 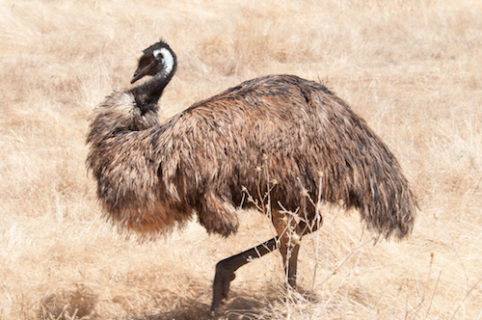 A female emu (Dromaius novaehollandiae) produces the booming vocalization. Note the closed mouth and expanded gular skin around the inflatable pouch at the base of the throat. Larry Jordan

We presume that emus can hear their own low-frequency calls, but auditory data are limited to chicks. The hearing of chicks ranges from 0.05 to 4 kHz (Manley et al. 1997), encompassing the known range of adult vocal signals. Yet, the representation of frequencies along the basilar papilla (the hearing organ in the emu’s inner ear) is strictly logarithmic, meaning that about two-thirds of the basilar papilla responds best to frequencies less than 1 kHz (Köppl and Manley 1997). Such specialization is exceptional among birds—thus, the hearing of emus seems to be selectively matched to the low-frequencies of their own calls (Corfield et al. 2014).

A problem with this body of work is that it ignores frequencies below the auditory limits of emu chicks (50 Hz) and people (20 Hz). Sound < 20 Hz is termed infrasound, and airborne infrasound can elicit responses from the human vestibular system that resemble the queasy sensations of motion sickness. This non-auditory pathway is particularly sensitive to vibrations < 10 Hz, but marginally higher frequencies, for example, the infrasonic rumbles of elephants (range: 14–24 Hz), can “feel like thunder [with no accompanying] sound at all, just throbbing and then nothing” (Payne 1998, 20). So we wondered… could emus be calling in the infrasound? If so, it could explain our feelings of jittery unease. 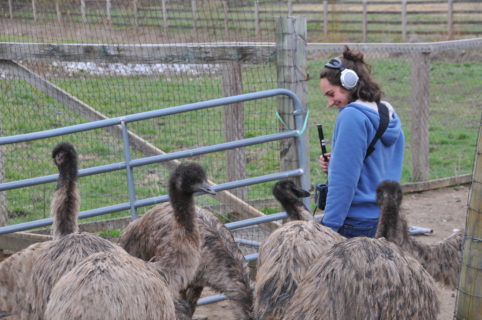 Laurel B. Symes prepares to record the vocalizations of female emus in Vermont. Their inquisitive nature is evident. Laurel B. Symes

To find out, we equipped ourselves with a specialized omnidirectional microphone (M50; range: 3 Hz–50 kHz; Earthworks, Milford, NH) and visited an emu farm in Vermont. The emus were separated into one- and two-year age cohorts, representing juveniles and young adults (emus reach sexual maturity at two years of age). The animals readily approached us and investigated our recording equipment; they drummed regularly but never boomed in our presence. Drumming is a pulsating sound with intervals of 0.2–1.0 second, sometimes as couplets (Davies 2002). The dominant frequency of drumming by two females was 134 and 147 Hz, with the first quartile frequency (the frequency below which 25 percent of the energy falls) at 82 and 111 Hz, respectively (each audio file is accessioned in the Macaulay Library of Natural Sound, ML149238101 and ML149238111). Alas, the drumming of female emus was decidedly rhythmic, but not infrasonic. Booming remains an unanalyzed and tantalizing call.

The emu holds cosmological significance for many Aboriginal communities, appearing in numerous dreamings (stories) from Dreamtime (the far distant past). Given that emus were a key source of food and a recurring motif in the iconographic record of Australia, it is tempting to ask whether the throbbing low-frequency sound of emu drumming bears any resemblance to the acoustic properties of Australian bullroarers, a sacred-secret object used during male initiation ceremonies and for communicating over long distances (for thorough reviews of this topic, see Matthews 1898 and Dundes 1976).

Figure 1: Representative spectrograms. (A) Drumming of a female emu. (B) Whirring of a bullroarer. The dominant frequencies of both sounds are contained below 150 Hz; neither sound contained appreciable appreciable energy < 20 Hz, the threshold for infrasound. Both images shown with an FFT window size of 5570 samples. Laurel B. Symes

Donald Tuzin observed the men’s cult of the Ilahita Arapesh, Papua New Guinea, and described the ritual sounds of bullroarers as “so weirdly disturbing, so arresting in the local auditory environment that one is sorely tempted to agree with believers who maintain, against all reason, including their own, that [the sound is] not of this world” (Tuzin et al. 1984, 582). Tuzin was confident that this uncanny sound contained infrasonic components, as were we when we experienced the booming of emus.

Pulsating peak frequencies of 80–150 Hz could be optimal for long-distance communication in habitats shared by emus and people, which represents most of Australia.A bullroarer (technically, a “free rotational aerophone”) is a spatulate solid body (usually a wooden slat) whirled around on the end of a string, and which emits a loud pulsating roar. The bioacoustician Neville Fletcher studied Australian bullroarers and the aerodynamics of sound generation in a sound-attenuating (anechoic) chamber. He reported peak frequencies of 40–160 Hz in intervals of about 0.2 seconds (Fletcher et al. 2002; Fletcher 2003). The absence of infrasound is perhaps disappointing, but the sinusoidal acoustic properties are strikingly similar to those of emu drumming.

To explore this idea further, we recorded the sound emitted from two museum-accessioned bullroarers from Australia. The twisting and untwisting of the string produced pulses of low-frequency sound every 2–4 seconds (Figure 1), a duration determined by the length of the string and the enthusiasm of the operator. The dominant frequency of whirring was 82 and 111 Hz, with the first quartile frequency (the frequency below which 25 percent of the energy falls) at 76 and 70 Hz, respectively. Our results compare well with those of Fletcher et al. (2002), whereas the acoustic congruence with emu drumming is simply astounding. The dominant energy of whirring and the first quartile of frequency of drumming are identical.

Although equipped with a suitable microphone, our search for infrasound faced several limitations. First, we were limited to ad hoc recordings of emus living on a farm in rural Vermont, an unnatural setting for eliciting the full repertoire of emu vocal behaviors. Second, we neither heard nor recorded booming, the call of greatest interest to us, perhaps because our sample was limited to juvenile and young adult females in the month of April. Third, we are novice users of bullroarers and the bullroarers themselves were of uncertain provenance (with a high probability of being airport kitsch). Each of these problems points to a rather disappointing and inconclusive outcome. At the same time, our findings do invite a few final words of speculation. 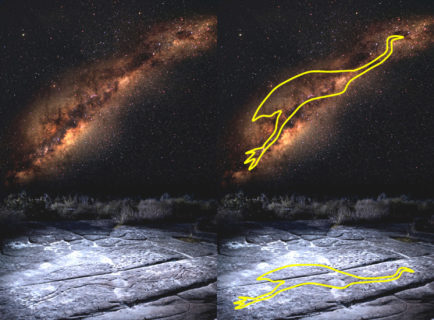 The Coalsack nebula is a dark region of the Milky Way. It is an absorption nebula (an expanse of cool gas and dust that absorbs background light, making it appear dark) approximately 600 light years away and 20–30 light years across. Aboriginal groups across Australia refer to this region of the night sky as the Emu in the Sky. Here, it is aligned with the “Emu in the Sky” rock engraving, as seen from Elvina Track, Kuringai Chase National Park. Note the expanded gular sac (throat pouch) in the engraving, which suggests the act of booming or drumming. Barnaby Norris

Low-frequency sounds propagate well in any habitat and convergence is the most likely explanation for the similar acoustic attributes of emu drumming and Australian bullroarers. Pulsating peak frequencies of 80–150 Hz could be optimal for long-distance communication in habitats shared by emus and people, which represents most of Australia. Another possibility is that bullroarers were designed to mimic or embody the drumming vocalization of emus. This explanation is unlikely given the global distribution of bullroarers in regions devoid of emus; however, a cross-cultural comparison of aeroacoustic properties could prove instructive. Bullroarers can be “tuned” by adjusting the size of the wooden slat and length of string, raising the possibility of regional acoustic differences. The aeroacoustics of Australian bullroarers might differ from those elsewhere, being more emu-like.

Such a comparison should be sensitive to potential cultural proscriptions toward the display and use of bullroarers. In Australia, bullroarers are often classified as sacred-secret objects for use by initiated men only. However, any object made for sale is not considered secret or sacred. Researchers should take care to consult with the National Inventory of Secret Sacred Aboriginal Men’s Objects and, if possible, the appropriate Aboriginal Traditional Owners before handling any Australian bullroarer.

Taken together, our results highlight the value of unexpected encounters during fieldwork, and the privilege of being in a position to search for, and fail to find, infrasound.

Nathaniel J. Dominy is the Charles Hansen Professor of Anthropology at Dartmouth College. He has a special fondness for emus, but his research is focused on the ecology of evolution primate sensory systems.

Laurel B. Symes is a Rose Postdoctoral Fellow at the Lab of Ornithology, Cornell University. Her research has focused on acoustic communication in insects, frogs, bats, and, at times, emus.