Ghosthunters use customized tech and tools to create the image of a scientific endeavor.

Ghosts have entered the realm of the scientific. Ghosts can be experienced, measured, and proven, according to ghost hunters. The scientific study of the paranormal is quite common now in American popular culture. In 1990, the Atlantic Paranormal Society (TAPS) was formed in Warwick, Rhode Island. TAPS defines its purpose as “helping those experiencing paranormal activity.” Although TAPS was not the United States’ first ghost hunting organization, it’s among the most popular, going on to feature in the popular television show Ghost Hunters, which began airing in 2004. Ghost Hunters was one of the first paranormal reality television shows, and the first to engage in, what I describe as, the parapsychological model of ghost hunting.

The parapsychological model of ghost hunting utilizes a scientific construction of ghosts. Investigators view ghosts as something that has a presence in this world and must abide by some set of natural laws that we have not yet discovered. Investigators use scientific-looking technologies and tools to materialize the unmaterializable. These tools enable ghost hunters to validate the folklore of a haunted location and in doing so prove the presence of a ghost.

A typical ghost hunting performance on Ghost Hunters includes a discussion of the lore surrounding a location. You can expect to see two types of discussions: historical lore and created lore. Historical lore is what you see before a ghost hunt. It may have a brief overview of the site’s history, a reference to a dark or tragic event that took place there, or a description of ghostly activity. You see created lore during a ghost hunt. Created lore is manufactured by observations of ghostly activity by investigators. Questions asked to the ghost, or interpretations of a ghost’s actions are common lore-creation tools. Using lore-creation, a ghost could be understood as malicious, confused, mischievous, or depressed. Created lore is typically articulated at the end of a ghost hunt, with investigators determining how to characterize the entities within the location.

Paranormal investigators who adhere to this method see ghosts and spirits as phenomena that can not only be perceived but proven with scientific-looking tools and methods. In 2012, skeptic and popular science writer Sharon Hill conducted a study of 1,000 websites created by “amateur research and investigation groups,” or ARIGs. These ARIGs investigated unusual topics—5 ARIGs investigated UFOs, 35 of them investigated cryptozoology, 81 investigated the paranormal, and 879 of them investigated ghosts. Of the ghost-focused groups, 526 referred to themselves as scientific, and only 19 rejected the label. Another 20 mentioned being “quasi” or “semi” scientific, and 408 of them did not mention science at all. Nevertheless, according to Hill it’s incredibly common for ARIGs to dedicate a page on their websites analyzing ghost-hunting equipment: many of the ARIGs investigated in Hill’s 2012 study emphasized the scientific nature of the equipment that investigators used, especially when the equipment is expensive or unique. These groups are representative of a common image of science held by non-scientists; as Hill says, “Science, viewed by laypeople, is about the symbols (such as paraphernalia and certain personal characteristics of scientists) and end products.” The groups see the tools and jargon used by scientists as symbols which indicate intellectual authority, and they use these symbols (tools) to achieve their end product: proving—or convincing someone of—the existence of ghosts.

With online platforms such as YouTube, ARIGs that may not be lucky enough to receive a television series can create their own channels. As with the Ghost Hunters television series, internet ghost hunters emphasize tools and technology. ARIGs on YouTube and similar platforms can broadcast their investigations to anyone on the Internet interested in ghost hunting. Of the many paranormal investigators on YouTube, we’re going to look at The Haunted Side. The Haunted Side is a ghost hunting channel based out of Fernley, Nevada, and is hosted by investigators Patrick McQueary and Jason Spencer. This channel specializes in medium-length videos featuring the lead investigators walking around a haunted location, trying to find proof of a haunting.

In The Haunted Side’s video “Hughes and Porter | Paranormal Investigation | Full Episode 4K | S01 E10,” we begin with a voiceover by Patrick McQueary telling us that the top levels of the Hughes and Porter building in Reno, Nevada, have been vacant for twenty years. During the investigation, restaurants occupied the building’s lower levels, and the top levels were being renovated. The owners of the building called the team in, as construction workers renovating the top floors were being “negatively affected” by whatever haunts the building. Construction workers apparently ran from the site, even leaving all their equipment behind. The investigators waited until night and entered the basement with their equipment.

I want to highlight two pieces of equipment: the Kinect and the Ovilus 5b. The Kinect was originally a peripheral (hardware accessory) for the Xbox 360, launched in 2010 as a motion tracking camera for games that supported it. The Kinect is a frequent tool used in ghost hunting videos. Using an infrared light source, the Kinect camera projects thousands of invisible dots onto a scene and creates a depth map by analyzing the difference between the pattern it projected and the pattern as it deforms on the scene. The Kinect then determines the distance between each dot and creates an image of the scene. The real time changes in the scene—motion, for example—are sent to a host device that is trained to recognize elements in the image characteristic of humans, such as the way body parts move. The Kinect’s internal computer outlines what the camera sees as moving joints and limbs. By making the inner workings of the Kinect camera visible and editable, paranormal investigators can see the Kinect recognize human bodies using this technique in real time. If moving joints and limbs characteristic of a human body are detected by the Kinect with no source, they are then interpreted as being indicative of a paranormal entity by those ghost hunting. The Kinect was introduced to the popular mind as a tool for ghost hunting through Paranormal Activity 4, where it was used to capture a child’s ghost, albeit a full-bodied apparition in the movie as opposed to the stick figures the Kinect actually shows.

An empty suspension bridge is shrouded in greenish-blue fog. The opposite end of the bridge cannot be seen through the fog.
Credit: Daniel Herron 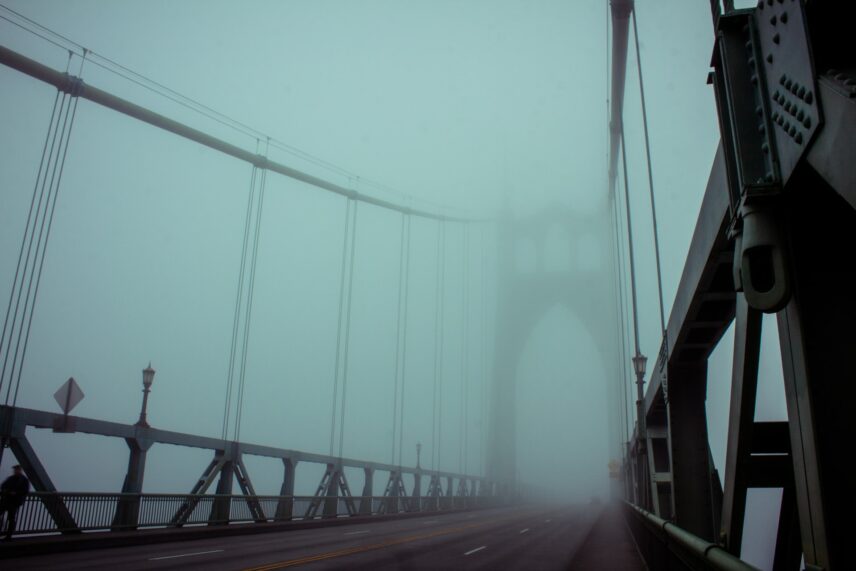 The investigators also use the Ovilus 5b. The Ovilus 5b—and the rest of the Ovilus series—is a device produced by paranormal researcher Bill Chappell’s company Digital Dowsing. According to Digital Dowsing’s overview of the Ovilus 5b, it “converts environmental readings into words.” When the device is in Dictionary Mode—as it is in McQueary’s video—the Ovilus detects “energy changes” and “the magnitude of the change is used to select 1 of 2048 predefined words” that are then voiced through the electronic dictionary on the device.

The section of the video most important to our analysis starts at about halfway through the investigation and continues through the end. At 16:40 minutes, McQueary eyes a balcony overlooking the Truckee River, and he asks if somebody jumped from the railing. Implying a tragic event such as suicide serves as an important lore-creation tool to make a location scarier. We see this used again later in the video. After McQueary asks this question, he walks out onto the balcony.

At 20:00, McQueary remarks that his neck hurts. As he approaches the camera, two distinct red rashes appear on the right side of his neck. Spencer traces his index and middle finger down the marks in a scratching motion. Shortly after, McQueary asks if something’s scratching him. This is another form of lore-creation. Investigators suppose the presence of a malicious spirit, giving the location a darker environment and incentivizing further investigation. Moving from the room where he was scratched, Spencer and McQueary make their way to the other side of the floor, arriving at a small, cramped hallway with three doors. He asks at 22:40 if somebody died in one of the units on the top floor, remarking that he was told previously that this was the case.

At 23:12, McQueary enters the last door on the right in the hallway, a bathroom. McQueary captures a figure on the Kinect Camera, apparently sitting down in the bathtub. The figure is accompanied by two others, both apparently standing near the window of the room. The bathtub figure’s left arm jostles up and down, and the Ovilus voices “sacrifice.” Along with the word sacrifice, the Ovilus voices the following words during the bathroom investigation: alcohol, kill, smother, and ravine. A few words were unintelligible during the segment, as the investigators were speaking over the Ovilus. McQueary interprets the jostling of the figure’s arm as being indicative of wrist cutting. This is another example of created lore: McQueary is implying the spirit is self-harming. This raises the question of why the spirit is self-harming, which may lead the investigates to a theory that something like that happened in this room previously, especially as the Ovilus voices “sacrifice.”

Nearing the end of the video, the investigators have set up in a large, empty room. At 33:22, the Ovilus voices “hell,” and then 4 seconds later, at 33:26, a shadow crosses from one end of a doorway to another, at the very back of the room. McQueary reacts immediately, turning around and remarking he saw somebody move. McQueary goes to investigate, and the Ovilus voices “mist.”

After finding nothing when they investigate the movement, they return to the bathroom to collect their equipment. McQueary’s coat is tugged. The Ovilus voices “tub” and “coat.” Spencer remarks that “tub” may reference the fact they were in the bathroom—the same bathroom where McQueary reportedly saw a figure attempting to cut its wrist.

With that, the video ends, with a voiceover by McQueary giving a short analysis. He says that “clearly something affecting people inside of the Hughes and Porter building, and after spending a night inside of it, it’s safe to say these spirits aren’t afraid to show it.”

With improved access to specialized ghost hunting technologies and the advent of video sharing platforms, more and more amateur ghost hunters—contrasted with the teams seen in paranormal reality television – can share their investigations with the world. These groups operate within the parapsychological model, following in the footsteps of organizations such as TAPS. They covet scientific tools and symbols, seeing them as technologies they can use to prove ghosts exist. But in between the fancy science, they revert to creating lore where none may exist. Questions such as, “Did somebody die in here?” are always going to have their answers be interpreted in a way that creates lore. Whether it’s a slight chill, or a distant sound, or a Ovlius saying “ravine,” lore will be created in a way that makes the investigation scarier. Although investigators pine to use symbols of scientific-looking equipment to signal intellectual authority, they must also rely on creating folklore to hunt ghosts.

Dylan Anderson is a student of anthropology whose interests include the portrayal of the paranormal in popular culture, popular archaeology and pseudoarcheology, New England colonial archaeology, and autistic culture.