From ancient stone reliefs to contemporary works of art, African artists have looked to the sun, moon, and stars for inspiration.

We have all experienced the wonder of gazing at a night sky filled with stars. Our imaginations take flight. We journey to the heavens, inspired by its majesty, and we recall stories about the constellations shining from above. Since the time of the ancient Egyptians, Africans have used their celestial observations to chart their movements through the land and to create their agricultural and ritual calendars.
—African Cosmos/Stellar Arts exhibition text

African Cosmos/Stellar Arts opened at the National Museum of African Art in 2012 and traveled to three additional venues through 2015. The exhibition took on the rich, complex, and little-studied topic of African cultural astronomy as a way to challenge commonly held notions of Africans as cultural, but not as scientific, beings. Unflattering media coverage and outdated information about Africa continues to cloud public—and, at times, scholarly—perceptions of Africa. African Cosmos and other knowledge-focused exhibitions and publications at our museum seek to demonstrate Africa’s aesthetic achievements in the visual arts and challenge popular misconceptions about Africa. The project explored the distinctive ways that astronomy is “culturally embedded… in the practices and traditions of lay experts and non-experts who relate, in the broadest sense, to the sky” (Holbrook 2008, 2). 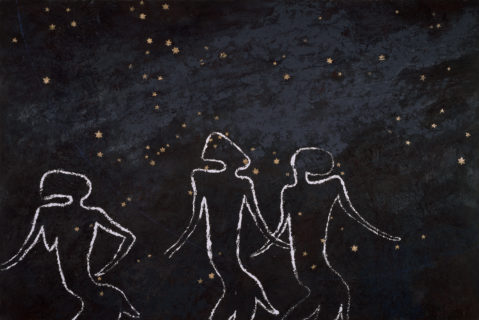 One of the threads woven through my scholarly pursuits has been a passion for communicating, through works of art, Africa’s contributions to the history of knowledge. Decades ago, the Congolese philosopher V. Y. Mudimbe pointed out that in considering African systems of knowledge, “Western interpreters as well as African analysts have been using categories and conceptual systems which depended on a Western epistemological order … [which] tended to organize and transform non-European areas into fundamentally European constructs” (1988, x). More recent trends in scholarship agree with Mudimbe that there is a need to break away from Western theories of knowledge and to consider African contributions to intellectual history from African perspectives—something that is increasingly easy to do thanks to the wealth of contributions by African intellectuals to the arts, humanities, and the sciences.

African Cosmos was grounded historically and showed how the sun, moon, stars, and the phenomena of lightning and rainbows inspired artists for thousands of years. It emphasized the intersection of ancient, traditional, modern, and contemporary African arts that were created by talented artists who, though separated by vast distances of time and space, engage in an artistic and intellectual dialogue about the relevance of the heavens to their artistic practice.

A painting by the contemporary South African artist Gavin Jantjes illustrates this point. The painting references a Southern African myth about a girl who, dancing with her friends by the light of the fire, reaches down, picks up the glowing embers, and throws them into the night sky where they remain and form the Milky Way. In realizing this work, the artist recognized the relevance of oral tradition and set the historic frame by rendering the figures in a schematic style akin to Southern Africa’s ancient rock paintings, some dating back thousands of years. For the artist, the painting also expressed a sense of hope and optimism for his nation and the world in the waning years of South Africa’s brutal system of apartheid.

Astronomer Anthony Aveni and other scholars have espoused the value of cultural astronomy. To help our audiences understand African systems of thought regarding the cosmos, I turned to cosmic models—works of art that reveal the fascinating ways African artists over time have conceptualized the cosmos. For example, the ancient Egyptians imaged their cosmos as the star-studded body of Nut the sky goddess arching over Geb the earth god, with Shu, the god of air, separating sky from earth, thus allowing life to form. Nut, said to swallow the sun disk at dusk each day to give birth to it again at dawn, was also represented as a being with outstretched wings ready to enfold the earth and its inhabitants, taking the deceased up to the heavens to become one with the imperishable stars. In a nineteenth-century stool from Mali, the circular seat and base represent Dogon conceptions of creation myths, recalling the celestial home of ancestral spirits and the terrestrial domain to which they descended to create the world of humans. Linking sky and earth are vertical supports formed of paired figures representing the founding ancestors.

Design direction tended toward curved architectural elements, reflecting the circular shapes of heavenly bodies, and it made effective use of our two-story gallery space—a tall stepped room divider was reminiscent of an ancient observatory, and a nearly 15-foot-tall serpent mask made by a Bwa artist from Burkina Faso was mounted on a high plinth at the center of the gallery as a sort of axis mundi. The gallery’s color scheme employed deep blues and warm golden hues to convey a sense of day and night, reinforced by a slowly changing looped projection high on a gallery wall of an increasingly glowing sun that slowly transitioned to a bright silvery full moon and slowly back again, subtly marking the passage of days.

The exhibition label copy adopted an IPOP interpretative approach that recognized the different interests in ideas, people, objects, and the physical space that visitors bring with them to their exhibition experiences. Labels were succinct, making the cosmic point about each object rather than providing extensive background or contextual information. Bold font headlines captured something about the form, function, or cosmic connection of the object. For example, a statuette of the lion-headed deity Sakmet was introduced by the headline “Ferocious defender” to emphasize her role in protecting the sun god Ra (or Re) from his enemies. For a contemporary painting of a figure dancing beneath a massive sun, we employed the popular expression “Awesome!” to convey the awe-inspiring power of the sun.

Through these strategies, visitor testing, and, of course, the selection and display of exceptional works of African art, we hoped that the objects and ideas presented in African Cosmos/Stellar Arts and its accompanying publication would resonate with visitors’ own experiences when viewing the wonders of the night sky, and enhance their understanding and appreciation of Africa’s longstanding intellectual and artistic engagement with the heavens.

Christine Mullen Kreamer is deputy director and chief curator at the National Museum of African Art, Smithsonian Institution. Her exhibitions and publications explore art and ritual, gender, African systems of knowledge, and museum practice, and they bridge the disciplines of art history, anthropology, and museum studies.