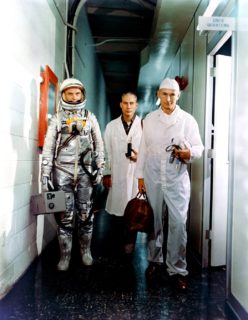 Last January in Texas, I sat listening as Solomon, a self-described atheist who had long worked with the NASA Human Research Program, talked about destiny. I asked him to tell me about the future of humans in space and he answered, eyes lit with emotion, “It’s whatever anybody wants it to be, and it’s unlimited. It’s inevitable.”

In 1969, tremendous social change was occurring throughout the West, stemming from the fear of nuclear annihilation, the civil rights movement, a push for gender equality, and more. Space exploration became a theater in the Cold War, a place where the United States and the Soviet Union could battle for supremacy without dropping bombs. America’s success in landing Neil Armstrong and Buzz Aldrin on the moon seemed to presage humanity’s entry into the “Space Age,” a new era of technological mastery, and the establishing of human communities in space.

Fifty years after Apollo 11, the US space program looks dramatically different. Decades of launches from Florida were followed by years of NASA relying on Russian rockets to get its astronauts into orbit. NASA is currently working with SpaceX and Boeing to re-establish crewed launches from American soil, but the agency’s human spaceflight programs are in a precarious situation, hoping to be buoyed by private companies. My conversations with engineers, doctors, astronauts, physicists, and other space workers, suggest a sense of destiny may make a difference by motivating many of those involved in getting humans into space.

The idea that a human future in space is written in the stars was common among my explicitly religious interlocutors. It was not, however, entirely absent among nonreligious space workers. Many participants asserted that something innate in human beings (whether it be through divine design or evolutionary processes) impels us to explore the universe. As space historian Roger Launius writes, “Statements of humanity’s salvation through spaceflight are fundamentally statements of faith predicated on no knowledge whatsoever” (2013, 51). This “faith” exists for the secular as well as the religious, demonstrating how the powerful symbolic pull of crewed missions and imagined colonies transcends religious membership and participation.

Among most of the devout I interviewed, there was a sense that God actively encourages space exploration. Joanna, a NASA medical doctor married to a Presbyterian minister, explained, “I think God gave us brains and made us humans special, with our cerebral cortices to try to figure it out. …I think God would be very excited about spaceflight because we’re trying to figure it out and we’re using the mental capabilities that were given.” Mitch, a Catholic astronomer, felt that God wanted humans to go into space as “an important step in making us more responsible for our planet, and thinking about the responsibility and care of other planets.” He argued further that modern science came out of the Abrahamic traditions because it started as an attempt to know the creator as a Father whose creations could be understood and explored by His children. Badra, a Muslim neurosurgery student and aspiring astronaut, illustrated a similar idea when she paraphrased Surah Al-Rahman 55:33: “If you have the power to go across the boundaries of the heavens and the earth and overpower the universe, then go ahead, whichever station you will go to, there will be His kingdom alone,” a passage she understood as explicit encouragement from God to go into space.

Chandra, a Hindu doctoral candidate studying evolutionary psychology, however, presented a Vedantic Hindu perspective that does not include an inspirational anthropomorphic God. Explaining that her interest in becoming an astronaut sometimes set her apart from colleagues who found space work too dangerous, she told me, “I don’t know if it’s ingrained by reincarnation, but what even is death?” Her sense that dangerous things are worth doing because of the basic immortality of the human soul is tremendously motivating in her life, as was a childhood in which religious training included a combination of physics and metaphysics. She associated space travel with her dharma—her “duty to the world.”

Without religion as a source of inspiration, many of my nonreligious interlocutors still believe that humans are somehow meant to go into space. When I asked Solomon if humans would ever colonize space, given our pathological responses to radiation, microgravity, and the like, he answered, “Absolutely. Inevitably.…It’s inconceivable that we can’t. I cannot grasp a universe where we can’t solve those problems.…If it doesn’t occur organically, then, by golly, we’ll help it. We will add protheses and cybernetic organism parts, and all that kind of stuff, if we really want to.” He is part of a project larger than himself and is confident of its success.

Some of the astronauts I interviewed, however, were less convinced than their earthbound colleagues of a human destiny in space. Shuttle astronaut Grover, an atheist raised in a Christian Science household, was motivated to go into space principally because he was “fascinated by the machine” and wanted to check spaceflight off his “bucket list.” Although he felt that humans were innately curious explorers, he wasn’t hopeful about our future in space: “I give humanity maybe 500 years, 1,000 years. We’ll kill ourselves off.” While Grover was an extreme case, most of my astronaut interlocutors were more somber than non-astronauts about human destiny. Religious conviction tended to create hope that a better future was possible. For instance Beverly, a Catholic flight engineer on the International Space Station, told me, “There is peace in the idea of a caring, creative God who could do evolution, could make stars, could do all of this stuff.”

As John F. Kennedy famously said, space exploration is hard. A human foothold in space will not make headway without the motivating force of optimism. Optimism inspires confidence that a future goal will be met, and that imagined goal has symbolic force. This recalls Clifford Geertz’s definition of religion as a “system of symbols which acts to establish powerful, pervasive, and long-lasting moods” and that these “moods and motivations seem uniquely realistic” (1973, 90). In the nineteenth and twentieth centuries, the colonial concept of manifest destiny provided such a system of symbols and served to motivate the westward expansion of European American settlers across the United States. While manifest destiny originated as an explicitly religious concept, it also motivated the secular in a way that remains remarkably compatible with Geertz’s definition. Similarly, both religious and secular space workers’ ideas about human destiny in outer space create what Geertz deemed an “aura of factuality” about the inevitability of permanent human settlements off-world. This is what Valerie Olson has called the “colonial model of spacefaring as human destiny” (2018, location 1716).

For many involved in the American project of human space settlement, a belief in destiny is a powerful source of motivation that often shapes and is shaped by religious ideas, and, even in the absence of explicit religious beliefs, inspires a secular sort of faith. A sense of destiny—religious or otherwise—provides many contemporary space workers, from astronauts and astronomers to engineers and aerospace physicians, with the moods and motivations humanity will need if we are ever to become a multi-planet species.

Deana L. Weibel is a professor of anthropology and religious studies at Grand Valley State University in Allendale, Michigan. Her early studies focused on religious pilgrimage and sacred places, while current scholarship examines how scientific and religious perspectives are reconciled among people whose work gives them expert knowledge about “the heavens.”