Diane M. Nelson: Queen of the Lizards, anthropologist, teacher, Madonna fan, singer, swimmer, rabble rouser, Sexta Avenida cowboy boot shopper, bike rider, double entendre player, compañera, martial artist, first rate wordsmith, Marxist feminist, shape shifter, desenvuelta, translator, yoga practitioner, fact finder, field worker, academic advisor. Diane received her BA in Cultural Anthropology from Wellesley College in 1985, and in June of that year began fieldwork in Guatemala together with recent Tufts graduate Paula Worby, at the invitation of their professor Beatriz Manz. She returned to Guatemala repeatedly, eventually bringing her own students there, building expansive networks and an extensive body of work on state violence and resistance to it, on Mayan organizing, on gender, on questions of counting and accounting, and on the politics of capitalist extraction.

Diane received her PhD in Cultural Anthropology from Stanford University in 1996 and began teaching at Lewis & Clark College in 1995. In 2001, she began over two decades of teaching in the Cultural Anthropology Department at Duke University. She authored four books: Who Counts? The Mathematics of Death and Life After Genocide (2015); Reckoning: The Ends of War in Guatemala (2009); A Finger in the Wound: Body Politics in Quincentennial Guatemala (1999); and Guatemala: Los Polos de Desarrollo: El Caso de la Desestructuración de las Comunidades Indígenas, Vol. 2 (1988). She coedited multiple volumes and journal issues, published dozens of articles, gave hundreds of talks, taught thousands of students, and transformed countless lives, sometimes through stormy, ferocious exchanges, always with kindness, tremendous generosity, and tenacious, fierce commitment. She consistently shared her work with her interlocuters in the field, frequently giving talks in Guatemala, and ensuring her books be translated into Spanish. During these years she also became a madrina, an aunt, and a beekeeper, a life partner to Mark Driscoll and a caregiver to her mother, moving between different kinds of kin and kind.

In Reckoning Diane examines efforts to reckon with and account for the horrors of Guatemala’s civil war. She writes that while the word “‘reckoning’ promises a fixed position from which to decide,” this promise is confounded by claims of duplicity and slippery assumptions. She calls claims to authenticity and stable identity into question, suggesting that reckoning with questions of justice requires acknowledging shifting relations of identification and transformation. She did this herself by moving from solidarity to “fluidarity.” Drawing on James Clifford, she developed fluidarity as a “practice of necessarily partial knowledge―in both the sense of taking the side of, and of being incomplete, vulnerable, and never completely fixed.” She emphasized that it is “at the sites of struggle and of production―the state, the school, and the family―that identifications are both reiterated and appropriated.” Through fluidarity she invited us to look to these relations, “rather than to any solid identity positions, in order to discern and support democratizing work.” She did this work ceaselessly and with love, moving between Guatemala City and the highlands, between Guatemala and the United States, between Ohio and North Carolina, between the classroom and demonstrations, between the myths and rituals of US football games and marriage practices and the violence and androcentrism of US imperialism in Latin America and elsewhere.

Diane died on April 27, 2022, after being diagnosed in February with pancreatic cancer. She was 58 years old. After her diagnosis, Diane continued to find words with which to speak about living in the context of structural violence. About chemo treatment she wrote:

Very sad and creepy to think of so many people being poisoned all together to counteract the poisons we’ve been imbibing since before we were born! As so many have pointed out, the absolute focus on the cancer and containing it makes total sense medically but it seems totally removed from the questions and politics of what is giving so many people cancer. . . . So many awesome people dedicating their lives to our care, pulling cancer-cultivating bodies out of the river while so many structures are pushing us in upstream.

Before her diagnosis, she was beginning a new project, Riparian Worlding: Mayan Life and Anti-Extractivism. From the hospital and then back at home she continued to read dissertation chapters; teach students; visit with friends, family, and colleagues; share poetry and music; make jokes; wink and reckon with the world. She, in turn, continues to be a force with which to reckon, and is painfully missed.

A woman with chin-length hair sits at a table with her head propped up on one hand and smiles widely. On the table are a number of items, such as a map, pens, notebooks, staplers, and a coffee cup.
Credit: Liz Oglesby 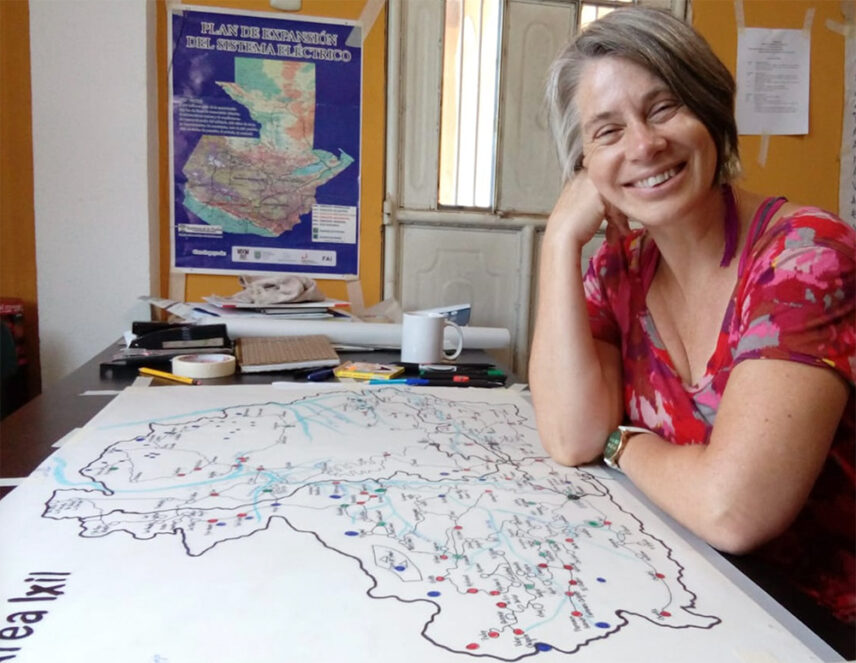