On mobile phones and webcams in Indian transnational families

I sit with a group of students in a classroom of a popular English language school in central Kerala, South India. Every day, the air temperature and humidity soar by noon, but their effects are softened by the lack of window glass, allowing the wind to blows freely and create a light, refreshing breeze. We’re discussing how the students imagine their life after they successfully migrate abroad for work, which is why they are all here: passing an English language exam is required in many of their preferred destination countries. I’m especially interested in hearing about how they intend to keep in touch with their aging parents who may, at some point, be in need of care. Matthew, a young male nurse, is adamant—talking to your aging parents via Skype can never make caring for them good.

“You need to be there, physically, to provide love and affection,” Matthew claims. 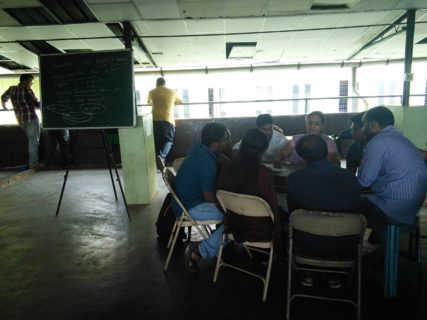 Many of Matthew’s classmates, mostly female nurses who, like Matthew, have never traveled outside of India, agree. In their view, technology can’t help in caring for parents, because it doesn’t allow for the touch. One of the students then further adds that “it’s important to eat together, because that’s where most of the conversation really happens.” Again, the group members nod in agreement, noting that people, even the shy ones, become talkative with age, and so they “need someone there to listen to them.”

How, then, would Alice, an elderly widow with a daughter-nurse in Australia and a son in Dubai, feel about living completely alone? When I arrive to Alice’s recently renovated three-story home, surrounded by a lush garden, I am in for a surprise. By the time of this home visit, I have heard a great deal about devastated old people, abandoned by their own children who are seeking material gain abroad. But Alice doesn’t appear devastated, abandoned, or even sad. Instead, her attitude toward the migration of her children is very pragmatic. She says firmly, “Because my children are abroad, I am living happily here. If they lived here and had no jobs or earned a very poor salary, would we all be happy? No!”

In Kerala, where even highly educated young people struggle to find employment and nurses have salaries that don’t cover their living expenses, international migration has been considered the way to go. But as I discover during my fieldwork in Kerala and Oman, a major destination country, Malayali nurses don’t necessarily migrate for exclusively individualistic reasons.

Instead, for many of them, migration is a way to secure employment that enables them to send remittances to their parents. Remittances are especially important for the aged people in India since despite national and local efforts for a re-organization of social welfare, most elderly neither receive a pension nor have a comprehensive health insurance, and are forced to cover their health expenses out of pocket. Thus, I find that in transnational families of nurses from Kerala, remittances help to enact labor migration as an elder care practice in itself.

But there is more to Alice’s obvious satisfaction, despite her children living in faraway countries rather than sharing their home with her, as the ideal of elder care in India would have it. Not only do her children visit Alice yearly for a month during their leave from work, but they both also call her on the phone every day. I notice that this trend is common in other transnational families of nurses, too. I meet some adult children who call their parents as much as 15 or 20 times a day! In a transnational context, co-residence and touch are not possible due to the geographic distance among family members. Instead, I find calling has become an elder care practice, which is supported by easily available, common information and communication technologies (ICTs) such as mobile phones and online webcam platforms. 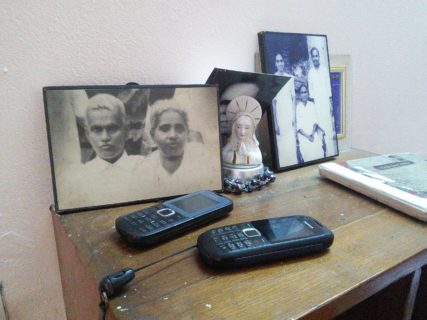 In addition to supporting care at a distance, ICTs shape care in intricate ways. For one, what comes to be considered “good care” in a transnational context becomes related to the frequency of calling. Back in the school, even those English language students who have not (yet) lived abroad recognize the importance of daily calling for caring family relations. The second group I am sitting with nods in agreement when Molly proclaims that it is “absolutely necessary to call every day, because if you don’t call for two days, your mother would call you back and ask what is wrong.” Such worrying is twofold: the parents are continuously concerned about the safety of their children, especially daughters, but they also worry about their relationship. A sudden break in calling may signal a break in the relation, and, knowing this very well, a group of female students notes that they sometimes reduce the frequency of their calls to express their dissatisfaction with their family. The act of calling, then, has become a way of providing love and affection—or care—at a distance. Moreover, the conversation with the students shows that the process is reciprocal; it is difficult, if not impossible, to separate elder care from intergenerational care.

Frequent calling, then, influences how family members communicate with each other and thus shapes caring relations. But when the adult children living abroad call their parents every day, what do they talk about? The conversation tends to turn to the everyday matters of the mundane life: the garden plants, the farm animals, the neighbors, their children, the church. Yet, these details are far from meaningless or trivial. Exchanging them is one particular way that people attempt to share everydayness while being physically apart. As such, frequent phone calls are comparable to sitting together at the dinner table, but the interaction is shaped by the affordances of the phone. Sharing everydayness on the phone by sharing the details of one’s daily life is a way of enacting co-presence at a distance, not only as a feeling, but as a concrete practice that involves parents, their children, and phones. 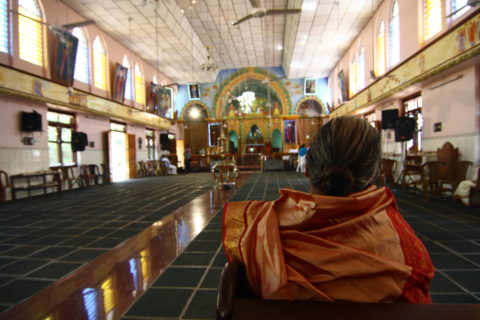 An elderly woman in the church, waiting for a wedding of her neighbors’ son. Kerala, 2014. Tanja Ahlin

Different types of technologies enact different types of co-presences, and different families engage with different ICTs to enact care in different ways. Transnational family members have to tinker with ICT devices, time zones, work schedules, favorite TV shows, and social activities to establish a good time to call. Not only the aging parents, but also the children may be in need of care, especially if they move to countries where they experience racial and religious discrimination. With their constant need to be fed with electricity and credit, even ICTs demand care for themselves. In this way, the dependency is dispersed between people and technologies that jointly form transnational care collectives.

Within these collectives, ICTs also influence how gender and kinship are enacted, as daughters’ filial duties shift through practices of elder care at a distance. Further, besides ICTs and money, even serious illness such as dementia shapes transnational care collectives: such health conditions force siblings to increase phone calls among each other and negotiate care organization for their parents.

After starting this fieldwork in 2014, I was compelled to look for ways to answer the “So what?” question. This question emerged and re-emerged during my conversations with fellow anthropologists, with whom I shared my fascination over how family members call each other at my fieldsites. At times, the anthropologists would ask me, “So people pick up the phone and call each other. What’s so fascinating about that?” My answer is that anthropological analyses of transnational family care can go more in-depth when we employ a material-semiotic approach that considers the crucial role of ICTs. By doing so, my work is an example of a generative interface between anthropology and science and technology studies (STS). Through connecting the practices, topics, and analytical tools of these two disciplines and linking my findings to policy, I engage in transdisciplinary bridgework. Most importantly, I aim to bring to light how something as mundane as picking up a mobile phone to call one’s parents is actually an astonishingly complex practice of care. Just consider the last time you called your parents, or your children, to ask them how their day was. By now, I hope you will agree with me about just how fascinating that is: that you called, that they answered.