Joseph Feldman: First, congratulations on the SLACA Book Prize and thank you for taking the time to speak with us. Something that shines through in Stuck with Tourism is your interdisciplinary background and comparative perspective on tourism. Could you tell us how you came to this project?

Matilde Córdoba Azcárate: What an honor to receive this award. I am thrilled, happy, and also humbled that my work was regarded this highly by colleagues at SLACA. As you nicely put it, Stuck with Tourism is radically interdisciplinary. It builds on different areas of scholarly production that have informed my international and cross-disciplinary training in Spain, the United Kingdom, Mexico, and the United States. They include debates in the anthropology of space and place, critical geography, tourism and mobilities studies, and ecological thought and practice. The book uses an ethnographic comparative lens that I put to work across a regional scale. Crafting this comparative lens was something almost given by the dynamics of state tourism development in the Yucatán Peninsula: predatory, speedy, always changing yet almost religiously gravitating around specific tourist frontstages, including Caribbean beaches, wilderness in the Gulf of Mexico coastlines, and the search for “culture” inlands. It was talking to tourists and workers at Celestún in the Gulf of México coast, during my PhD research in the early 2000s when I first realized that tourists and locals’ experiences of place and labor organization could not be fully grasped without paying attention to those other sites and places in the region they were constantly invoking in our conversations.

In my PhD training at the Department of Anthropology at the Universidad Complutense de Madrid we were taught that comparisons and evocations were to be considered fully when doing ethnographic fieldwork. It wasn’t until I was at The Graduate Center Earth and Environmental Sciences Program as a Fulbright Postdoctoral Fellow that I saw the book truly coming alive for the first time—it made increasing sense to seek to understand what kind of social geography these state tourism development initiatives were bringing forward and at what cost.

JF: Your approach goes beyond many of the conventional ways of thinking and talking about tourism (impacts, host-guest encounters, etc.), focusing instead on the “stickiness” of tourism landscapes and the industry’s predatory and extractive dimensions. Could you discuss some of the influences and experiences that led you to conceptualize tourism in the way that you do?

MCA: Since I started my research in Yucatán, I regularly witnessed how state tourism initiatives were discussed and engaged in a simultaneous love-hate relationship in everyday interactions and conversations. Often tourists would not be present, and the host-guest encounters I initially set out to search for were often missing, becoming only part of what I was perceiving to be important. State tourism development was predating on natural resources, bodies, and futures but service workers seemed to be grateful for their jobs. Most of them also acknowledged they were exhausted, trapped, with no other alternative. From Maya elders in rural areas, to young service workers, university researchers and students, fishermen, tour guides, NGO personnel, the way tourism worked in the region was characterized by a not always desirable seasonality, rapacious gendered regimes, environmentally destructive practices. Yet, there was no choice, no alternative but to work for such a predatory industry just as it happened decades ago when there was no choice but to work for the henequen industry. Some people referred to the way they felt working for tourism—in all-inclusive hotels, in boutique hotels, in boats, from home—as being stuck, engrapados. They variously referred to this stickiness as something affecting their bodies as well as the experience of the everyday buildings, roads, and landscapes they saw, used, and moved through. It referred to the end of a particular texture in the sand, the embodied perception of yet more urban heat, and the moral ambivalences with respect to extractive jobs that provided for the present but that everyone knew could not last. “Engrapados” also evoked the henequen export days, the way labor was organized then, the servitudes they endured. I wanted my work to be faithful to their own accounts and the extraction-entrapment tension helped theoretically to do so: it situates tourism in the precise tension between predation and provision that people referred to.

JF: Another striking characteristic of Stuck with Tourism is the way it takes the reader to, among other places, a mass tourism-dominated city (Cancún), a fishing town transformed by ecotourism (Celestún), and a community whose economy revolves around guayabera shirt production (Tekit). Could you about why you decided to conduct research in the places you did, and perhaps some of the challenges of writing a truly multi-sited ethnography?

MCA: Perhaps one of the most difficult aspects of this project has been to decide what not to write about in order to make the book tell a story that mattered for interdisciplinary and comparative audiences, but also one that made sense locally, to those I worked with and from whom I learned. This story was about the ways in which tourism, when embraced as a development tool by states and international agencies, had become a major force in the organization of the predatory geographies of late capitalism.

If in Celestún it was Western-centric ideas around nature that had to become stable for tourists to consume, in Cancún it was the (also Western-centric) idealized Caribbean beach that was at stake. Both demanded the enclosure of land and resources, yet what in Cancún was approached with acquiescence, in Celestún was fiercely fought against. In inland Yucatán, a place I arrived at through tourists’ and regional students’ accounts, the market-driven valorization of all things Maya had led to dangerous practices of selective heritage protection and the brutal veiling of factory towns like Tekit, where no tourists set foot, but without which tourism could not work. It was knowing about these sites together, along with their differentiated yet similar predatory labor practices and environmental habits, that tourism emerged full force as something that was more than just an industry, just a set of pre-arranged encounters, or just an experience. It was an ordering practice.

JF: If there are students or other readers who approach your book with the question of how tourism in the Yucatán or elsewhere could be more ethical, what insights or aspects of your research might you direct them to?

MCA: Stuck with Tourism should not be read as a manifesto against tourism and your question matters to address this issue. Nobody I spoke with, not even the most radically opposed to tourism, wanted the end of it. They do want it to be more ethical, as you say, more sustainable, respectful of difference, mindful of other ways of living and imagining, and less predatory. (Or not predatory at all!) The book is a cautionary tale that helps nuance the still persistent turn to tourism as a solution in times of crisis.

The book gives tools to recognize unethical forms of tourism that prevail in different tourism modalities—resort tourism, nature tourism, luxury tourism—and hopefully, tools to resist them. I think once we consider tourism as a main agent in the organization of everyday life and not just as something we engage with as consumers, we should speak out against forms of predatory tourism such as cruises that pollute knowingly and don’t abide by fair labor regulations; cultural and ethnic tourism that predates on deeply colonial representations of otherness; mass and luxury tourisms that thrive on consuming places and bodies to their deaths. Searching for more ethical ways of traveling or becoming a tourist researcher starts with listening to those working in the industry and living in those places speak from their own perspectives. More research should be done on the forms of labor that tourism engages in and on how tourism shapes the built environment across the world. I hope that the book’s “on the ground” approach can inspire others who are doing tourism research outside of established scholarly canons.

JF: I wanted to give you the opportunity to share some observations about tourism-related developments in the Yucatán Peninsula (or perhaps at one of your field sites) since the time of the book’s publication. Is there anything in particular you wish to highlight?

MCA: The inequities exacerbated by the COVID-19 pandemic in the region and the unfettered and militarized supervision of Tren Maya are two ongoing developments worth noting. While I address Tren Maya in the book, now I am working to understand the renewed New Age interest in heritage boutique hotels, principally in relation to the materialization of what I’m calling a specifically colonial touristic archive of what Mayanness is for tomorrow. It is sad to see how COVID-19 has been used as an opportunity to encroach on public spaces around hacienda-hotels in inland Yucatán. The train’s new infrastructure is helping to get more and more land under corporate control and tangible and intangible heritage is being openly used for transnational real estate profit. It is also worrisome to say the least to see the ways in which Indigenous religious performances have been mediatized side by side with archaeological and anthropological networks of transnational knowledge on “the Maya” in order to give legitimacy to what seems to be yet another fully neoliberal project of land, labor, and resource extraction. I hope the book gets read by those working on Tren Maya so that we learn from past mistakes and plan for more equitable and environmentally-friendly tourism models that are not predicated on the loss and suffering of some for the enjoyment of others.

A book cover features an image of a minimalist wooden structure on an empty stretch of beach. A cloudy sky is in the background is in the background and the ocean is a greenish color, with small waves crashing onto the light brown sand. The text, which is white, blue-gray, and black includes the author’s name (Matilde Córdoba Azcárate) and the book’s title (Stuck with Tourism: Space, Power, and Labor in Contemporary Yucatán).
Credit: University of California Press 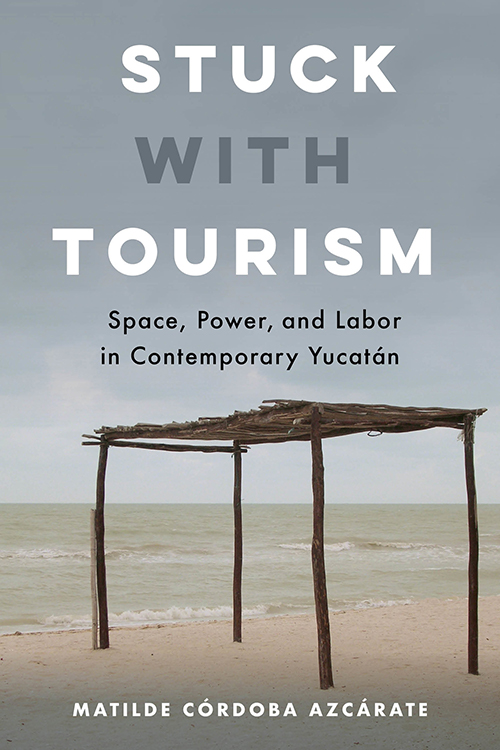 Matilde Córdoba Azcárate is an associate professor in the Communication Department at the University of California, San Diego. Her research examines tourism, capitalism, and crisis. She is the author of Stuck with Tourism: Space, Power and Labor in Contemporary Yucatán and co-editor of Tourism Geopolitics.

Joseph Feldman is a postdoctoral fellow at the Martin Institute and the Idaho Society of Fellows at the University of Idaho.