Drawing and Fishing a Salty Shore

Nearshore fishing communities in Mumbai cast their nets in an environment of risk, uncertainty, and luck rooted in experience.

Many artisanal fishing communities in Mumbai fish close to the shore. Nearshore fishing comprises a range of practices: in the fishing village where I worked, most fishers practiced what is generally termed as bag-net fishing. This technique uses long, bag shaped nets that are tied to buys and float with the tide, trapping fish as they move with the currents. Nearshore fishing, its ecologies, and economies face pressure from a rapidly changing urban edge, coastal pollution, and from India’s fisheries policies that incentivize intensive fishing practices.

Nearshore fishing communities in Mumbai inhabit a shoreline and an everyday that is inherently characterized by unpredictability and risk. These risks are manifold—they are not simply the outcome of environmental conditions and ecological formations but are also shaped by the social and economic systems that control fishers and fish. In India, recent revisions to national coastal management policy have introduced new vocabularies of belonging and value to legitimize intensive fishing practices. These changes to coastal governance reconfigure the coast as a territorial unit with a set potential for securing catch, a number that is thought to grow year upon year through investment in infrastructure and through subsidies for large-scale, intensive fishing. This growth-based outlook has had a drastic effect on coastal ecologies where fast depleting fish stocks are making nearshore fishing unviable as a livelihood.

Contrary to the developmental visions of policies, nearshore fishing works within a mesh of interdependencies that entangle the fishing community with fish markets; the materialities of fish; elemental continuities between mud, marsh, and water; and fragile more-than-human worlds. In contrasting coastal management with nearshore fishing, I do not wish to replicate problematic characterizations of traditional practices as less technologically sophisticated or as more susceptible to vagaries of nature. Instead, I am interested in understanding how nearshore fishing and contemporary coastal management intersect to produce the coast.

In her work on marine management and ecotourism in The Bahamas, Amelia Moore writes that coasts are not simply sites where fishing happens—they are constantly worked on and produced as fisheries (2012). Fisheries is a term that refers to both the site and conditions in which fishing happens and practices of fishing. Thinking of coasts as fisheries allows us to see how they are not simply environments that exist “out there,” but are designed through institutional arrangements, economies, and practices. As newer coastal management policies increasingly support intensive fishing methods, they place a great deal of pressure on the small-scale fishing industry and the webs of interdependencies that sustain it.

Nearshore fishing brings in a significantly lower annual catch than those brought in by trawler or purse-seine net fishing. Rather than regarding it as an outcome of the ways in which small-scale fishing practices organize and design the coast, the Indian government has long characterized this ratio as one that signifies lack (see for example, Subramanian 2009). This overlooks the ways in which small-scale fishing works: the practices it employs attend to coastal nonhumans and their rhythms, such as fish breeding cycles, tides, and annual weather patterns. Unlike the peripatetic vessels that trawl the seas and dredge the seafloor, most forms of nearshore fishing work through systems of marine tenure that divide the coastal waters between different fishing villages in the city. In Mumbai, many of the fishers use bag-nets—nets that are tied to stakes and stay afloat through the force of the tidal currents. As Götz Hoeppe’s (2007) work on fishing in Kerala shows, fishers actively share knowledge to calculate risks and engage in improvisational practices in catching and selling fish. This is particularly important for nearshore fishing given its narrow profit margins. Bag net fishing operates on relationships that ensure collective sustenance, which, in turn, produces a far more sustainable coast in the long term.

These graphic illustrations delve into the decision-making practices and ideas of luck that underpin fishing. It is part of a larger project on how technical images such as maps, plans, infographics, and visual archives of marine flora and fauna shape the coast and coastal futures. Set in Mumbai, the project follows state cartographers, amateur meteorologists, fishing communities, planners, and environmental advocates as they engage in a range of visual projects. I use drawing as a mode of doing and communicating anthropology, and move between graphic narratives and text. My work plays with the relationship between pictures and words to produce layered narratives that trace an edge made of interactions and continuities between humans, infrastructure, landscape, pollutants, trash, and coastal flora and fauna. 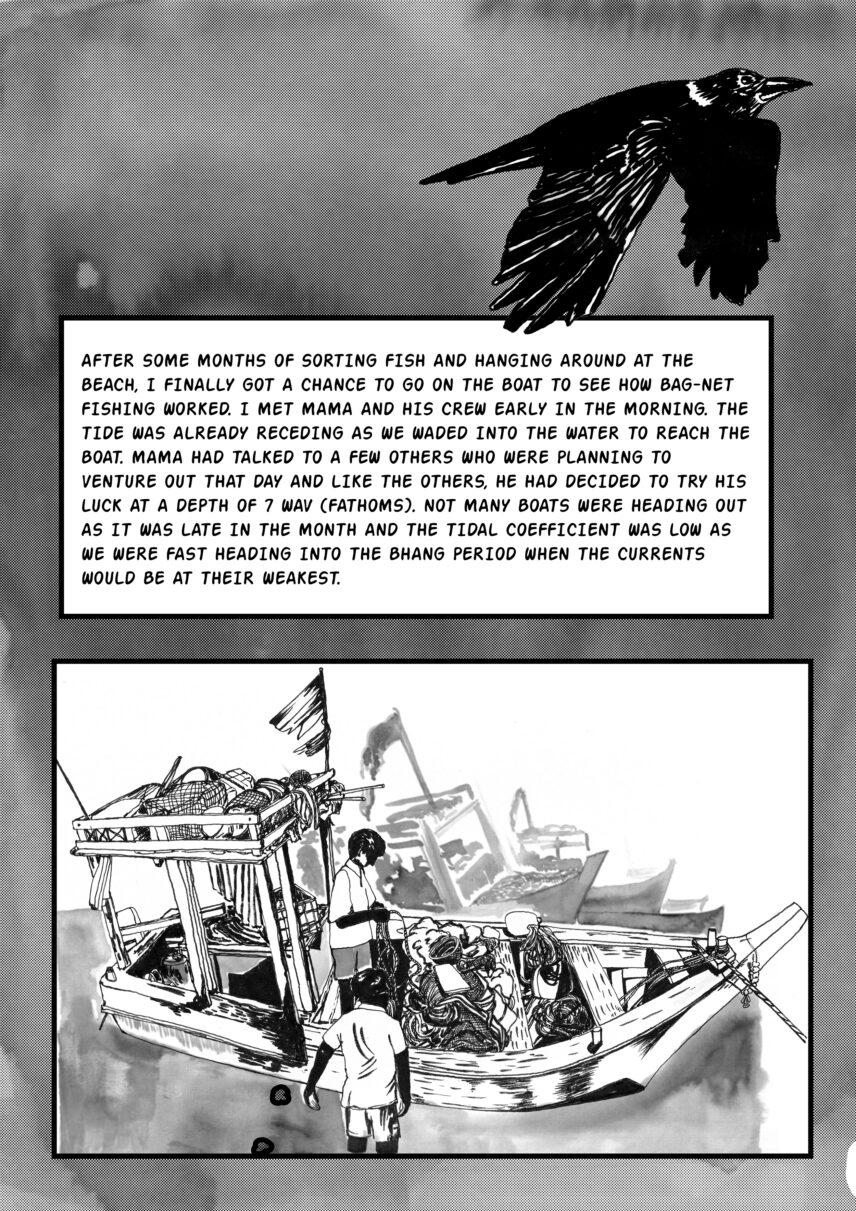 Image description: A bird flies over the top of the illustration. Below that, a panel depicts a fishing boat with two people. The boat contains many nets, ropes, and other fishing implements. One person stands in the boat, the other stands beside it. The text accompanying the panel reads: “After some months of sorting fish and hanging around at the beach, I finally got a chance to go on the boat to see how bag-net fishing worked. I met Mama and his crew early in the morning. The tide was already receding as we waded into the water to reach the boat. Mama had talked to a few others who were planning to venture out that day and like the others, he had decided to try his luck at a depth of 7 wav (fathoms). Not many boats were heading out as it was late in the month and the tidal coefficient was low as we were fast heading into the bhang period when the currents would be at their weakest.
Credit: Chitra Venkataramani 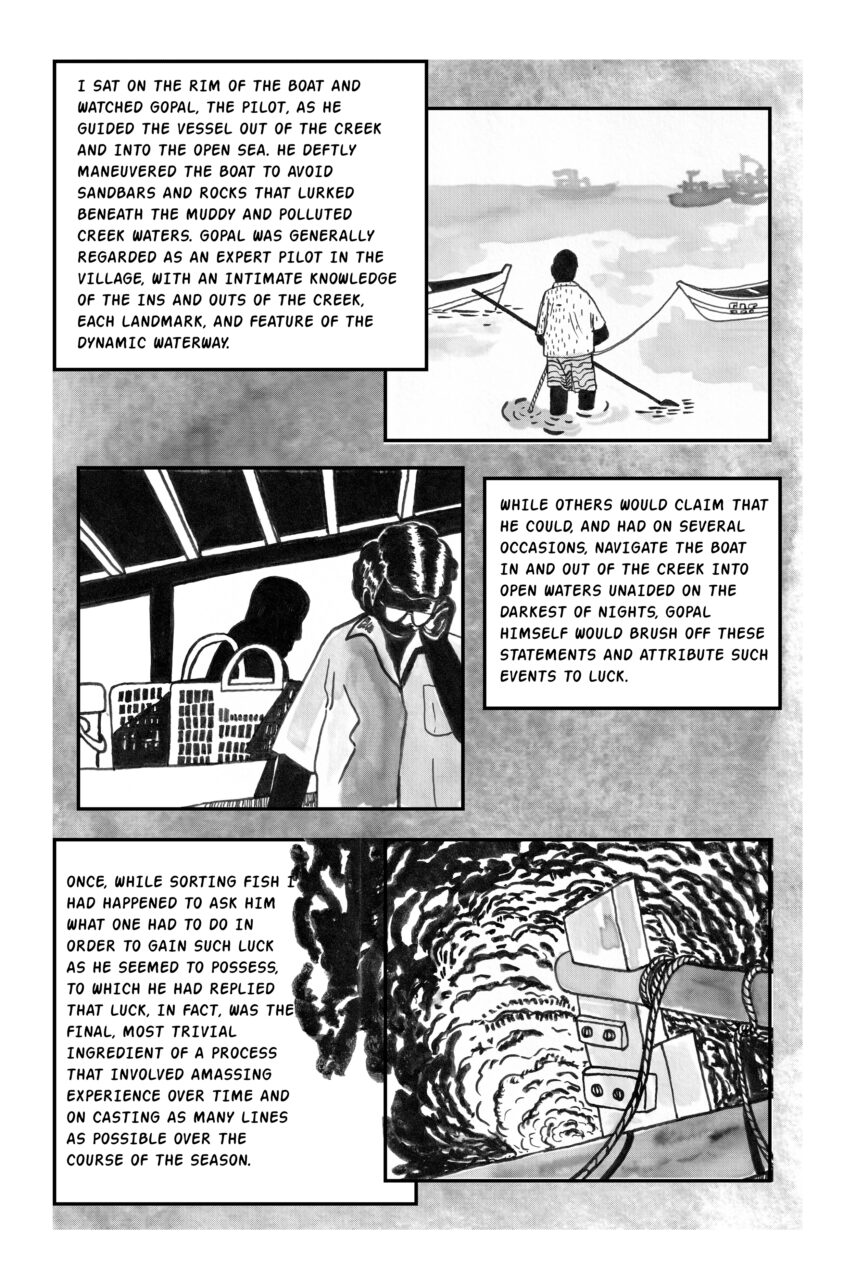 Image description: The comic book page consists of three panels. One shows an individual wading through the water toward a boat, with hazily visible boats in the background. The next panel depicts someone with a phone up to their ear, standing in front of a collection of bags and a silhouette of a person in profile. The third panel is of a boat’s rudder. The text in three separate boxes reads as follows: “I sat on the rim of the boat and watched Gopal, the pilot, as he guided the vessel out of the creek and into the open sea. He deftly maneuvered the boat to avoid sandbars and rocks that lurked beneath the muddy and polluted creek waters. Gopal was generally regarded as an expert pilot in the village, with an Intimate knowledge of the dynamic water way. “While others would claim that he could, and had on several occasions, navigate the boat in and out of the creek into open waters unaided on the darkest of nights, Gopal himself would brush off these statements and attribute such events to luck. “Once while sorting fish, I had happened to ask him what one had to do in order to gain such luck as he seemed to possess to which he had replied that luck, in fact, was the final most trivial ingredient of a process that involved amassing experience over time and on casting as many lines as possible over the course of the season.”
Credit: Chitra Venkataramani 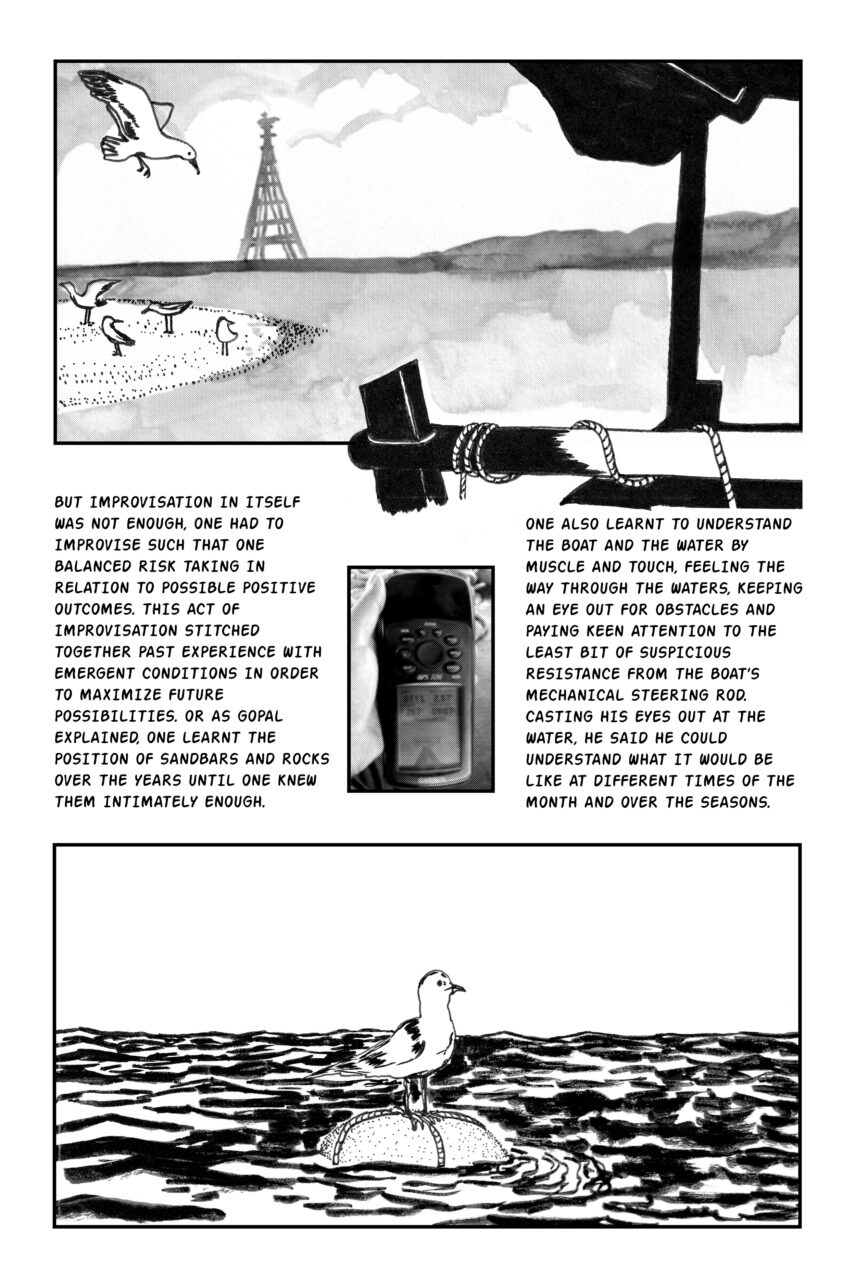 Image description: This comic page includes three panels. In the first panel, a number of seagulls mill around a small sandbar in the middle of water. One is in flight and a tower can be seen in the background. The second panel includes a hand holding an electronic device. The final panel is of the water; an object with a rope coiled on it floats and a seagull stands atop it. The text accompanying this page follows. “But improvisation in itself was not enough, one had to improvise such that one balanced risk taking in relation to possible positive outcomes. This act of improvisation stitched together past experience with emergent conditions in order to maximize future possibilities. Or as Gopal explained, one learnt the position of sandbars and rocks over the years until one knew them intimately enough. One also learnt to understand the boat and the water by muscle and touch, feeling the way through the waters, keeping an eye out for obstacles and paying keen attention to the least bit of suspicious resistance from the boat’s mechanical steering rod. Casting his eyes out at the water, he said he could understand what it would be like at different times of the month and over the seasons.”
Credit: Chitra Venkataramani 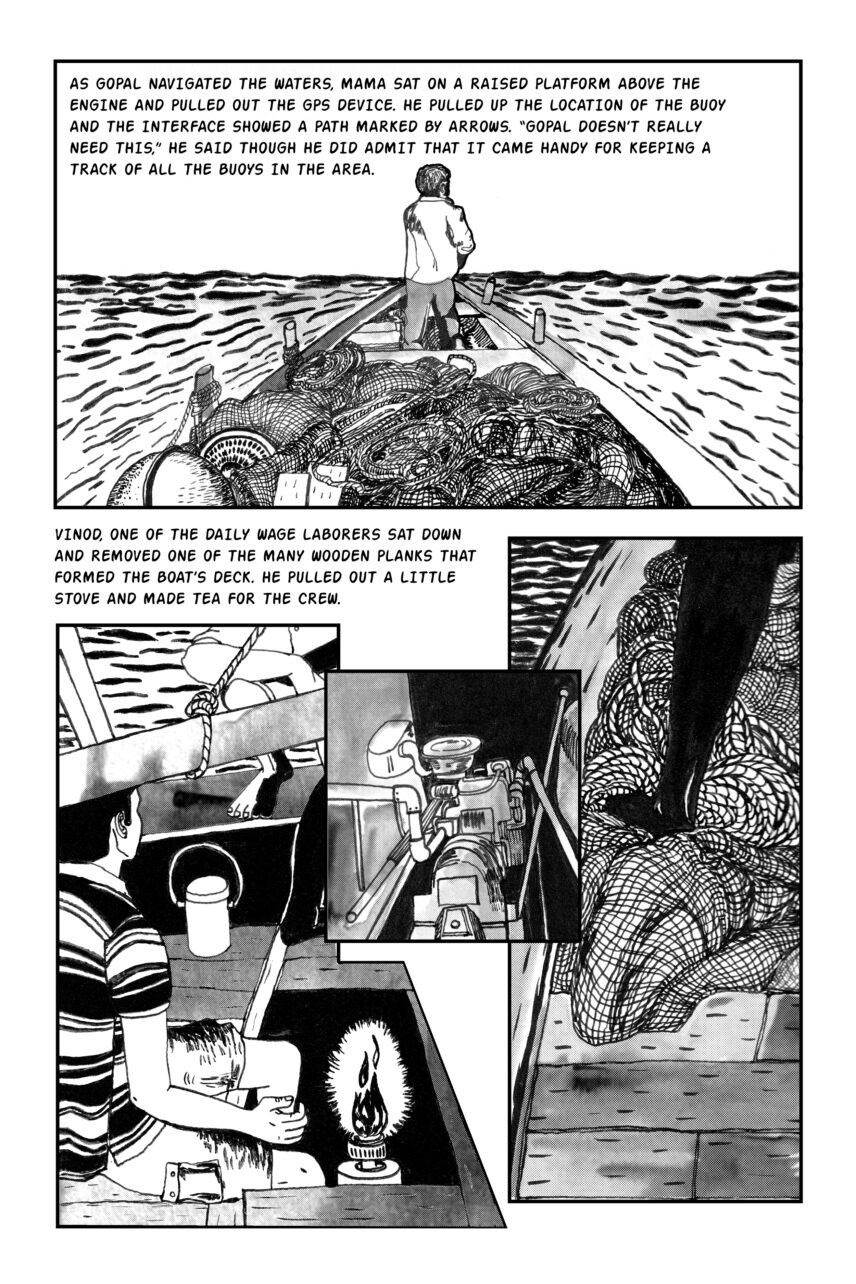 Image description: This comic book page contains a number of panels. The first panel is a boat at sea, viewed from someone sitting at the stern of the boat, many nets packed into the boat, and an individual stands at the bow looking out onto the water. Three panels overlap: one depicts a person sitting in the boat, a few planks pulled away, and a stove’s torch burning in front of him; another details the boat engine, and the third panel shows the planks of the boat and a pile of nets and rope. The text of the panel follows. “As Gopal navigated the waters, Mama sat on a raised platform above the engine and pulled out the GPS device. He pulled up the location of the buoy and the interface showed a path marked by arrows. ‘Gopal doesn’t really need this,’ he said though he did admit that it came handy for keeping track of all the buoys in the area. Vinod, one of the daily wage laborers sat down and removed one of the many wooden planks that formed the boat’s deck. He pulled out a little stove and made tea for the crew.”
Credit: Chitra Venkataramani 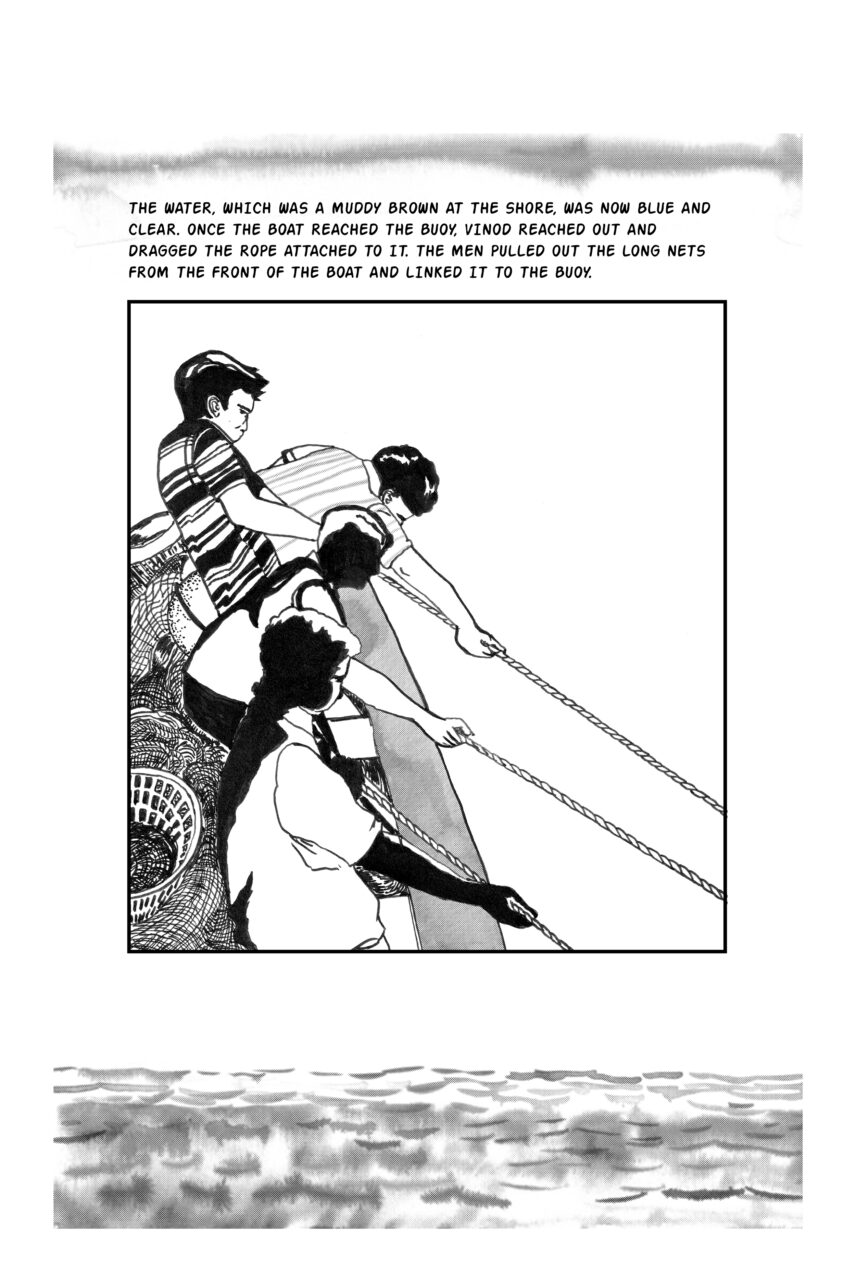 Image description: Four people on a boat pull on three different ropes. Text above the illustration reads: “The water, which was a muddy brown at the shore, was now blue and clear. Once the boat reached the buoy, Vinod reached out and dragged the rope attached to it. The men pulled out the long nets from the front of the boat and linked it to the buoy.”
Credit: Chitra Venkataramani 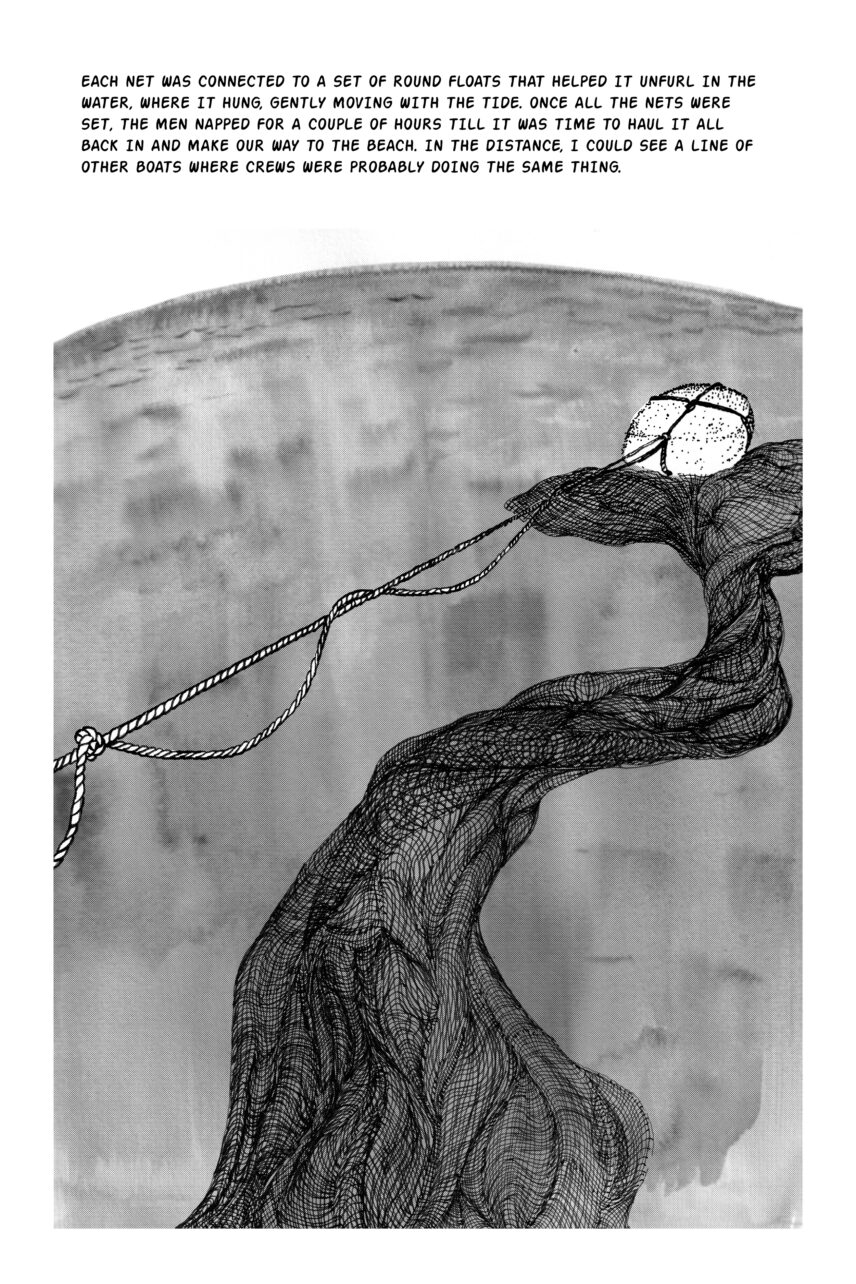 Water fills most of the comic page and a long net curls through the water, a round float attached to ropes at the end of the net. The text reads: “Each net was connected to a set of round floats that helped it unfurl in the water, where it hung, gently moving with the tide. Once all the nets were set, the men napped for a couple of hours till it was time to haul it all back in and make our way to the beach. In the distance, I could see a line of other boats where crews were probably doing the same thing.”

Chitra Venkataramani is an assistant professor at the Department of Sociology at the National University of Singapore. She is currently working on her first book, which is tentatively titled Drawing Coastlines: Climate Anxieties and the Visual Reinvention of Mumbai’s Shore.