Drugs and Uncertainty in Tanzania

In much of the Global South, biomedical markets have been flooded by a massive proliferation of counterfeit pharmaceuticals. The World Health Organization identifies Sub-Saharan Africa, as the region most affected by this development, with estimates of drugs thought to be fake ranging from 30–60 percent. I engage this topic using a grounded ethnographic approach, carried out in the regional capital of Iringa, a Tanzanian city with a drug shop on every corner downtown. During two and a half years of fieldwork, as I accompanied my companions on their quests for healing (from a wide variety of healers, including doctors, pharmacists, traditional healers, and others), I did not assume a priori that I knew what pharmaceuticals were, what potentialities they held, nor, crucially, what it means for them to be “fake.”

Early on, I discovered the Swahili neologism chakachua, which is used, along with other terms like bandia, to refer to counterfeits. The term was originally coined during the 2010 elections, in which much of the country argued that the results were rigged. One reporter, Musuto wa Chirangi wrote in September 2010 during the initial spread of the neologism that the word can mean “to adulterate, to change, to do injustice, to destroy, to cheat, [and] to reverse.” Pharmacists and their clients often used the term chakachua to describe the condition of pharmaceuticals to me. For instance, Sekela, an Iringan pharmacist, explained that all the pills I was looking at in her shop were probably at least a little bit “chakachua.” She continued: “Like when you commission a couch to be made and you tell them you want it made out of three materials, but they only use two”; or, “Like Chinese cell phones which are not really phones.”

Sekela (on right) at Kalenga Pharmacy in Iringa. Laura Meek, 2015.

My dissertation traces the bodily epistemologies through which medical personnel and lay people alike in Tanzania decipher, assess, and respond to these unreliable conditions. I found that my interlocuters had a deep awareness of the proper colors, textures, tastes, and smells of medicines, and were carefully attuned to reading the signs in their bodies as they metabolized these substances. As I followed chakachua pharmaceuticals in Iringa, however, my fieldwork often spilled over into other chakachua realms outside of biomedicine. This was especially true with food. Much as Stacey Langwick’s (2018) new work on gardens of dawa lishe (nutritious medicine) indicates, there is no necessary division between medicines and foods: “Not only do people cultivate plants used as foods and those used as medicines together, but the practices through which plants become medicinal or nutritious fold in on one another.” My project evinces another more nefarious becoming-with: the ways in which chakachua drugs and foods fold in on one another to become, not nutritious medicines (dawa lishe), but instead dangerous poisons (sumu).

Take for instance a cartoon which appeared in the March 19-25, 2015 issue of Tabibu (Treatment), a weekly gazette in Tanzania that covers a wide range of topics related to health, that shows a man and woman speaking to one another with a counter between them. The word “Famasi” written on the counter in this picture tells the reader that this is a pharmacy, and, given the context clues (including the fact that they are stealing), the reader should infer that this is taking place within a government facility. One of my friends in Iringa speculated that this scene was most likely of a hospital ward “because usually the ward nurses and the pharmacists do that game [mchezo].”

In this cartoon, the man says: “You know, nurse, there are people with health insurance, but when they come, we tell them the medicine has run out so that they should buy, and we should divide.” He means that the patients should go to a private pharmacy to buy the medicine while the hospital staff divides it among themselves, that is, steals it. The nurse replies: “Those, leave them, [forget those people]. Give me those [medicines] for worms to go and put in my store. Also, those [medicines] for infected people [with HIV/AIDS]; I’ll go and give them to pigs.” Her plan to put the de-worming drugs in her store is the key indication that this is a government facility, as medical personnel who are employed by the government frequently own their own private clinics or pharmacies on the side. The original Swahili reads: “Unajua nesi kuna watu wana bima za afya lakini wakija tunawaambia dawa zimeisha ili wanunue nasi tugawane,” from the man on the left. And the woman on the right replies, “Hao achana nao nipe zile za minyoo nikawe dukani kwangu pia na zile za waathirika nikawape nguruwe.” 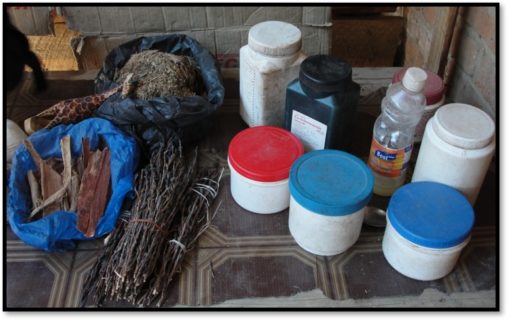 I asked one of my doctor friends at a local government facility if he does this—if he takes any medicines from the hospital to sell in his own pharmacy outside of town—to which he replied, with a wry smile, “You know, Laura, our government salaries are very high.” Only later did it dawn on me that government salaries are quite low, and everyone knows this. My friend was explaining why he needed to enter that zigzag economy—why one cannot make do by going straight. Here I am thinking with Jeremy Jones’s (2010) analysis of economic strategies for making do in Zimbabwe, where strategies that entail a suspension of the rules are described as kukiya-kiyaor (zigzag) rather than straight. While some scholars might refer to these heterogeneous schemes for getting by as belonging to the “informal economy,” I concur with Jones’s assessment that their significance today lies “not in the fact that some people engage in kukiya-kiya” but, rather, “that the economy itself has come to be defined by kukiya-kiya” to such an extent that the “real economy” has “turned into a kukiya-kiya economy” (2010, 286; emphasis in original).

When the nurse in the cartoon says that she will feed her pigs “those medicines for infected people,” she is referring to people with HIV/AIDS and hence to ARVs (antiretrovirals). The idea here is to make the pigs grow quickly. When I showed the cartoon to the great-grandmother with whom I lived, she commented that similar practices were common up north where she’s from—especially during the dry season when there isn’t enough grass for grazing cows. At that time of year, she said, herders feed the cows “maji na dawa la ukimvi tu” (water and ARVs only). Such practices draw upon a widespread perception that when HIV-positive individuals start taking ARVs, they gain weight very quickly. In fact, if a thin person puts on weight fast, this alone can spark rumors that they might be infected. Further, the fact that an HIV-positive person develops after starting ARVs is itself considered chakachua: it does not share the same socially-positive valence that being larger normally implies. People too can be altered in ways that appear artificial, dubious, or that just don’t seem to play by the rules.

These kinds of chakachua practices are widespread throughout East Africa and perhaps characteristic of contemporary concerns across the Indian Ocean region, and beyond. For instance, Caroline Merrifield (2017) describes the proliferation of fake and adulterated foods in China, which are referred to as “black-hearted products.” She writes that “even the most ‘scientific’ and ‘authoritative’ sources acknowledge the difficulty of telling the fake from the real.” Harris Solomon has analyzed how people embody this unreliability in India where contaminated food is a fact of life. He describes the logics through which people respond to food adulterations in conditions too uncertain for consumerist notions like “choice” to make sense: “In a world shot through with very certain knowing that things are not themselves, the question of ‘who and what can you rely on’ involves more than a crisis of knowing. It involves, further, powerful acts upon the patterned and porous relations between bodies and environments” (2015, 189).

Pharmaceuticals in Tanzania destabilize the boundary between medicine and what Achille Mbembe (2001) refers to as “doubles” in the post-colonial context. These doubles—medicine and fake, medicine and poison—suggest that we need to rethink the grand narratives of global health—like that the overuse or misuse of pharmaceuticals in the Global South is the central matter of concern. Instead, I maintain that to better understand how these substances come to matter, we must recognize that they are volatile and potentially dangerous, and yet also unreliable and potentially impotent—in other words, they are one among many contradictory, divergent, and unstable forces whose potentials are at once positive and negative. In this context, Tanzanian practices are aimed at determining the true nature of these drugs, differentiating types of drugs, and establishing control over their variable capacities.

Laura Meek is a PhD candidate in the Department of Anthropology at the University of California, Davis. Her dissertation, Pharmaceuticals in Divergence: Radical Uncertainty and World-Making Tastes in Tanzania, addresses counterfeit pharmaceuticals, bodily epistemologies, and the politics of healing in East Africa. This project was funded by the National Science Foundation, the Reimagining Indian Ocean Worlds Mellon Research Initiative, and the Wenner-Gren Foundation.
Cite as: Meek, Laura. 2018. “Drugs and Uncertainty in Tanzania.” Anthropology News website, December 11, 2018. DOI: 10.1111/AN.1055