Embattled Futures on the Margins of the Liberal Empire

A sense of embattlement has emerged as an increasingly common mode of experiencing the European present and thinking about its future. Is this a reinvigoration of politics or a dangerous amplification of political differences?

In today’s Europe, more and more people feel existentially threatened by the intersecting effects of climate change, war, migration, neoliberal economics, and the simultaneous pluralization and polarization of politics. Instead of pursuing a better future, individuals and groups now attempt to protect what they’ve got: social status, civil rights, and political regimes to culture, dignity, and the environment. Nationalists and liberals, majorities and minorities, climate activists and their opponents, all feel that the present and future are embattled.

This is a noteworthy shift. For much of the twentieth century, the future was represented as an improvement on the present. The notion the man-made future of ever greater modernity reigned supreme, even though alternatives to it—such the idea of the future as God’s will—did not completely disappear. In the case of Soviet socialism, the future came before it was supposed to, thus changing the path of historical development. In the West, the post–World War II development paradigm was also based on a progressive vision of the future that had to be defended from civilizational (communist) rivals. The Western “victory” in the Cold War reinforced the conviction that things were going to keep getting better—more growth, more wealth, more well-being, and so forth, ad infinitum. This was visible both in grand (geo)political plans, and the ordinary terms in which people saw their own futures.

However, it was precisely the pursuit of the future as perpetual growth-oriented progress that led to the transformation of this arrangement of futures. Already in the late twentieth century, there was a shift toward “risk society” (Beck 1992)—people tended to see the future as a series of risks that had to be mitigated in the present, leading to the rise of various insurance and financial products. But the overall frame – one that conceived of the future as generally better than the present—was still quite powerful. Today this overall frame is being replaced with a new one: the future not only as risky, but as a series of temporal and spatial threats. For example, an enclosure of established privileges in defense from perceived threats and vulnerabilities is the signature strategy in the revival of the European radical right. But self-proclaimed liberals are similarly mobilizing to protect “liberal democracy” or the “liberal international order” from domestic right-wing (and sometimes left-wing) populism or Russia.

In the political arena, division and distinction seem to increasingly supplant coordination and compromise as ways of dealing with disagreement. But unlike in the Cold War era, the emerging divisions do not align with one another in an image of a world split into two camps. Instead, multiple, distinct political fault-lines have emerged, no longer subdued by the modernist promise of progress for all, nor contained by a weakening liberal hegemony.

A border pole is surrounded by lush greenery. A line of trees, numerous bushes, and tall grasses fill the picture with a bright blue sky and fluffy white clouds in the background. The serenity of the border site contrasts with the sense of embattlement described in the essay.
Credit: Dace Dzenovska 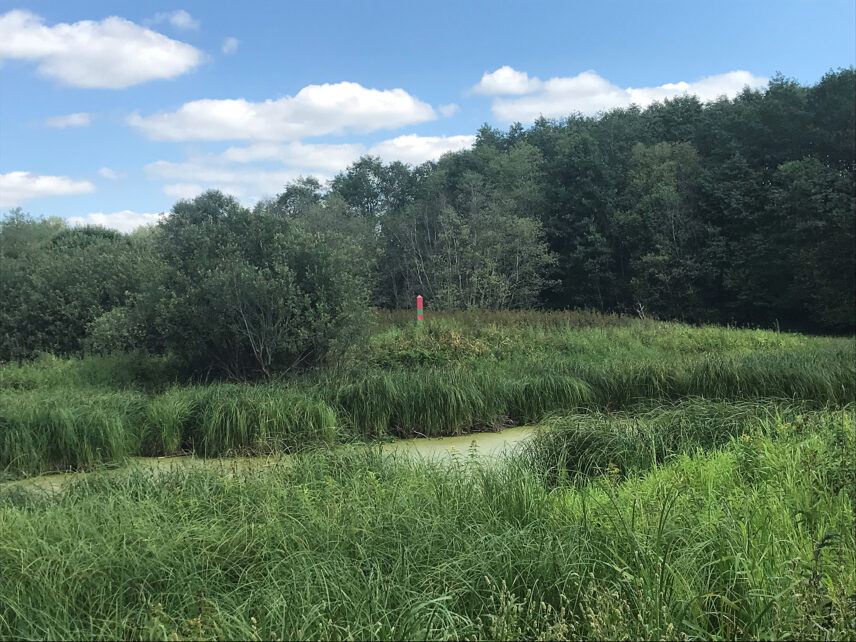 The Edge of the Liberal Empire, Latvia-Russia border, June 2018.

This sense of embattlement is particularly pronounced in East Europe, where a new post-Cold War imperial frontier is being drawn. Our own respective field sites—in Latvia (Dzenovska) and Ukraine (Fedirko)—are prime examples of the former Western frontier of the Soviet Union turned besieged borderland of the US-led liberal capitalist empire. In Ukraine, the liberal hegemony and its dominant ways of resolving political disagreements through centrist compromise and constitutive exclusion of the extremes has never been secured. In the last two decades, as Ukraine was being integrated into the fold of Western liberal modernity and the Euro-Atlantic geopolitical order that sustains it, there has emerged no single political project that could claim to successfully represent and integrate the contradictions and disagreements that came to a head in two cycles of revolutionary contention in 1992–2004 and 2005–2014 (Minakov and Rojanski 2018). Instead, the intelligentsia and political elites have staked their fortunes on translating economic tensions and class antagonism into the idiom of mutually opposed ethno-cultural identities. In Latvia, embattlement—in the form of a permanent threat of Russia and Russians within the borders of the country—is the existential condition that constitutes the nation and its founding documents. In such conditions, it is both nationalists and liberals that can claim to be liberal, the former aligning with “the international liberal order” against Russia and the latter criticizing nationalists for exclusion of minorities as defined by liberal politics of difference. In the meantime, classical liberalism lives quietly in the shadows of (il)liberal battlegrounds (Fedirko 2021, Dzenovska 2021).

In Ukraine, the Maidan revolution of 2013–14 brought to power an informal political coalition of Western-oriented liberals and nationalists, already familiar in Latvia. Russia’s annexation of Crimea and the eruption of the war in Donbas further cemented this coalition ideologically and socially, insulating it from electoral competition from its historic opponents who sourced their support among eastern Ukrainian voters generally opposed to the Euro-Atlantic project. This national-liberal bloc, strong under President Poroshenko in 2014–19, has had growing influence even within the more ecumenical administration of President Zelenskyi. Despite the continued representation of their interests within several successive governments, members of this loose group—nationalist intelligentsia, small and medium entrepreneurs, foreign graduates-turned-civil servants, and staff of Western-funded liberal NGOs—acutely feel the transience of their power. They are threatened by the broader public’s rejection of liberal reforms, and challenged by oligarchic groups that compete for influence over government policy. In the context of a military impasse in Donbas, these “winners” of the revolution have responded to these various challenges by systematically portraying their opponents as either manipulated by, or effectively collaborating with the Kremlin—Ukraine’s main enemy, as they see it. It is perhaps unsurprising that in a country at war, struggle for power should invoke the figures of ally and enemy. Self-described liberals who once advocated for civil rights, now argue that the Ukrainian polity cannot afford freedom of speech, or freedom of speaking languages other than Ukrainian, lest these undermine the country’s sovereignty. At the same time, thanks to an inflow of Western development and military assistance, Ukrainian liberal-nationalist elites and the state itself, have become conscripts of a larger geopolitical confrontation which amplifies the stakes and the scale of local conflicts. It is in this context that liberal reformers and far-right militants in Ukraine come to agree that they are protecting European “values” and future when they oppose the Kremlin, Russian-backed separatists, or indeed other Ukrainians who disagree with their political projects. Their visions of a good future and virtuous personhood are to be achieved against, and perhaps at the expense of, those of their opponents.

Across these various instances of contention and polarisation, we suggest that embattlement is emerging as a central element in the structure of feeling of the current historical moment. In Raymond Williams’s (1979) use, structure of feeling is something that is not explicitly articulated, but is present in “a pattern of impulses, restraints, tones.” To use contemporary language, it is the affect of the current moment. This sense of embattlement arises from and gives shape to the shift from the liberal ideal of consensus and compromise to a Schmittian distinction of friend and enemy—or good and evil (Mouffe 2005)—as the basis of political relations (Schmitt 1996). It signals a move away from what Chantal Mouffe has called the “post-political” negation of antagonism. However, instead of celebrating it as a repoliticization of politics, transnational political elites and liberal-left publics, including academics, express concern about open political antagonism. This illuminates the hegemony of the affective regime of consensus liberal democracy.

From Mouffe’s perspective, the surfacing of political conflict from under liberal hubris, signals a political reinvigoration necessary for real democratic politics which agonistically confronts, rather than reconciles, different interests and values. Yet, the way in which the confrontation of the 2013–14 revolution in Ukraine has led to armed conflict and a realignment of local schisms with larger, imperial projects, should give us a pause. As the war fuels a machine of political exclusion and imposes a common denominator on most political claims and relations, the sense of embattlement felt by the national-liberal coalition and their opponents reveals a contraction, rather than expansion, of the space of legitimate political disagreement. In Eastern Europe, where domestic politics is overdetermined by the geopolitics of a unipolar world, it is evident that the crisis of the post-political liberal consensus is not contained by the borders of any one polity. We cannot think of ‘domestic’ antagonisms in Latvia and Ukraine without taking into account how they are folded into a geopolitical confrontation at the margins of Europe that not only amplifies, but also weaponizes, political differences. Reinvigorating disagreement may be replacing stifling consensus, but it is far from certain that the embattled groups and individuals will agree on the terms of their disagreement.

Dace Dzenovska is associate professor in anthropology of migration at the University of Oxford and author of School of Europeanness: Tolerance and Other Lessons in Political Liberalism in Latvia (Cornell 2018). Her current research addresses shifting relationships between people, place, capital and the state in the emptying towns and villages of Eastern Europe.

Taras Fedirko is British Academy Research Fellow in social anthropology at the University of St Andrews. His research focuses on middle class professionals involved in promoting political liberalism at the core (Britain) and semi-periphery (Ukraine) of global capitalism.