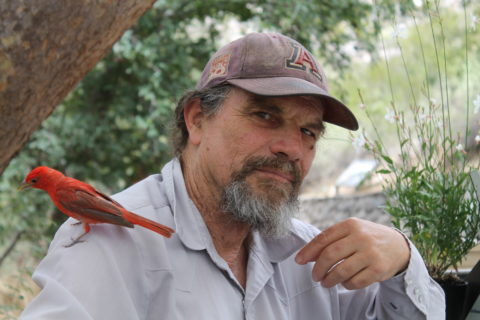 Image description: A bearded man with brown and white hair is wearing a baseball cap and light grey button-down shirt and poses with a red bird perched on his shoulder. Trees and other greenery fill the background.
Caption: Eric Henderson

Eric Bruce Henderson passed away after a brief battle with cancer in Tucson, Arizona, on March 31, 2020.

A dedicated scholar of his beloved Southwest, where he began his ethnographic fieldwork in 1972 working with the Navajo on the trailblazing environmental impact study, the Lake Powell Project, he was most recently a professor of anthropology at Northland Pioneer College in Holbrook, Arizona. Between 2004 and 2016, he served, among other roles, as vice president for learning and dean of arts and sciences. One of the aspects of his tenure as an administrator he most appreciated was the opportunity to enlarge opportunities and mentor students from Navajo and Apache counties.

Henderson was born on July 23, 1950, in Los Angeles, California, and studied at Reed College in Portland Oregon before graduating from Portland State College with a double major in anthropology and history and a minor in geology. Under the supervision of Jerrold Levy at the University of Arizona, he obtained a PhD in anthropology in 1985. His dissertation titled, “Wealth, Status and Change among the Kaibeto Plateau Navajo,” examined transformations of Navajo social structures and lifeways on the reservation from the 1920s through the devastating stock reduction programs of the 1930s and into the 1970s.

After completing his fieldwork, Henderson completed a JD at the University of Arizona in 1982. While writing his dissertation he served as a legal clerk for the White Mountain Apache. He subsequently clerked for Justice Stanley G. Feldman of the Arizona Supreme Court and for Judge Joseph Livermore of the Arizona Court of Appeals.

After receiving his PhD, Henderson served as legal counsel to the Minority Leader in the Arizona House of Representatives until 1991. This period was marked by the impeachment of Governor Evan Mecham in 1987, the first time a governor had been impeached in the United States since 1929. Henderson was instrumental in establishing the procedures for the impeachment proceedings and trial, which resulted in the conviction of Mecham by the State Senate.

Following his public service in the Arizona legislature, Henderson returned to his true passion, the discipline of anthropology, the study of humanity, which included all four fields of anthropology. He was an assistant professor of anthropology at the University of Northern Iowa in Cedar Falls Waterloo between 1991 and 1998, where he worked on the United Faculty Alliance Contract Bargaining Team in negotiations that led to a new compensation package. In 1998 he returned to the west where he taught at Great Basin College (GBC) in Elko, Nevada, for six years. At GBC he also served as lead faculty for integrative studies overseeing the creation and inauguration of the BA degree program. He also co-directed a widely popular archaeological field school with his wife, the anthropologist Amy Henderson.

His major research contributions were centered on the Navajo Nation. In the 1970s Henderson was a contributor to the Lake Powell Project; in the 1980s he worked with Jerrold Levy and Stephen Kunitz on the Navajo Aging Project, and again in the 1990s, when he was co-investigator for the Case Control Studies of Alcohol Abuse on the Navajo Reservation. Henderson was an outstanding lecturer and teacher who was devoted to his students and relished following their professional and personal successes after their graduations. He blended intellectual rigor, political passion, empathy, good humor, and brutally honest and practical feedback.

Henderson was an extraordinarily generous mentor and colleague with boundless intellectual curiosity and a deep passion for scholarly argument as well as collaboration. He is profoundly missed by all those who ever had the privilege to spend time with him. He is survived by his wife and collaborator, the anthropologist and illustrator Amy Henderson. He is also survived by daughters Tanya and Elinor and sons Xander, Kai, and Colin.