It has been suggested that anthropology may be undergoing a “graphic-ethnographic turn” as we have seen an explosion of work that blends images and text. While these graphic projects have ranged widely in form—from multimodal digital collections to cartooning to illustrations paired with prose—many have experimented with and drawn inspiration from sequential art (i.e., comics). The ethnoGRAPHIC series at University of Toronto Press has focused specifically on using anthropological theories and methods to produce great graphic novels, and the success of its graphic ethnographies has generated widespread optimism about the creative possibilities opened up by graphic mediums.

As a lifelong reader of comics, when I first learned that a major university press was set to launch a series dedicated entirely to anthropologists working on graphic narratives, I was smitten. And my mind was reeling—I knew I wanted to create a graphic novel for my next major fieldwork project but had not a clue about where to start. And perhaps an even greater challenge was the fact that I am an anthropologist of finance, a subfield known for geeking out about the (deeply uncharismatic) minutiae of abstract economic models, many of which reside in the deterritorialized space of diversified global portfolios of assets and logics of accumulation. Could there possibly be a story there? Were there even any people to populate the panels of a comic?

A steaming cup of coffee. The narrator says, “It was late-just before closing. The streets of Asunción were empty, we were the last table at Café Consulado. Even the barista was asleep behind the counter. It was a hot Paraguayan night, we like working with the windows open to catch a breeze and watch the stars… Panel 2: Three figures in silhouette under the spotlight of a single lamp, seated around a table. The narrator continues, “…it rests and calms the spirit, like humming a familiar folk song from the campo, the only sound that disturbed the silence was the clicking of keys and scratching of pencils. But… Panel 3: Two men and a woman sitting at a table. The woman with long hair pulled up in a bun types on a computer, a man with a baseball cap draws on a sketchpad, and a man with a beard also draws on a sketchpad. The woman thinks “What’s that?”. The narrator says, “The chair in front of us creaked, the one everyone who comes to talk to us about Paraguayan comics sits in.” Panel 4: We look over the back of the empty chair to see the surprised faces of the two men and a woman. The man with the baseball cap says, “What a strange noise. It sounded like someone was sitting down…” Panel 5: Close up of the man with the beard, his expression surprised. He says, “But…” Panel 6: The two men look at the empty chair as a man in a wide brimmed hat and collared shirt begins to appear, semi-transparent. Panel 7: The man with a beard looks directly out of the frame, his expression shocked and mouth open in surprise. Panel 8: The figure a wide brimmed hat is seated in the chair, no longer transparent. Panel 9: An elderly man in profile, seated, with downcast eyes.
Credit: Caroline Schuster, Enrique Bernardou, and David Bueno 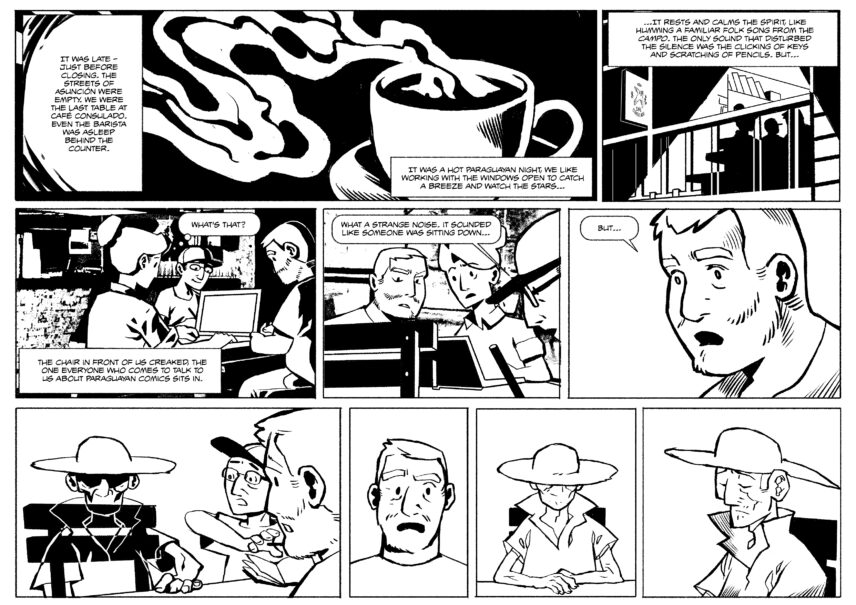 Adaptation of the first page of El Eternauta, where the Writer is visited by the time travelling Eternaut and told his story. Here, the Writer is re-imagined as the team of anthropologist and illustrators, and Paraguayan farmer Don Wilfrido stands in for the Ethno-Eternaut. Click to view the full-size comic page.

Both problems were partially resolved through collaboration. The generative dialogue between illustrators and anthropologists to create comics has been one of the great sources of excitement about the emerging genre. In late 2018, I found myself at one of the hippest cafés in Asunción for the launch of an art exhibition by a new generation of young Paraguayan illustrators who were producing original sequential art. The show was curated by Enrique Bernardou, a student of one of Paraguay’s great comics maestros Kike Olmedo, and now a prolific creator and instructor in his own right. What was fascinating to me was that Enrique immediately “got” the anthropology angle of the project. This was due in part to his long collaboration with El Surtidor, a key forum for social justice oriented journalism (the name translates literally as “gas station,” referring to the source of the latest news and public crossroads). El Surti is known for high-impact graphic news stories, and partners with some of Paraguay’s most interesting illustrators to make investigative journalism accessible to a wide audience.

To develop the graphic ethnography, Enrique suggested teaming up with David Bueno, a recognized talent in the horror and supernatural genres, perfect for creating a stylized version of both the horrors of extractive finance and the more-than-human monsters like trickster Pomberos and supernatural macumba curses that shape day-to-day life in the countryside. Within short order, we had created a production studio for anthropological comics in Paraguay. This was only possible due to the already widespread use of graphic narrative nonfiction for social justice amongst the community of illustrators in Asunción and their publics.

Enrique and David were deeply immersed in Paraguayan visual conventions, which made the setting and characters immediately recognizable and rooted in place. This left the puzzle of the script. To solve our problem of how to write a gripping story about financial systems, and especially the complex weather derivatives that were being sold to campesino farmers to hedge against climate risks such as drought, I returned to my comics-loving roots. The Franco-Belgian tradition has produced a slew of classic heist comics, such as Jean van Hamme’s popular Largo Winch saga from the 1990s that was propelled by corporate intrigue, high finance, backstabbing, and murders most foul. Jonathan Hickman’s The Black Monday Murders for Image Comics (2017–18) repurposed and reimagined these themes for the post-financial crisis twenty-first-century United States. The aha! moment came when I realized that we were turning the classic story template on its head. The preoccupations of small-scale farmers in Paraguay’s rural sesame-belt were absolutely about fraud and scandal, but rather than fixating on fortunes and profits among the wealthy and powerful, they focused on idioms of loss and repair. This shift in perspective offered an opportunity to reimagine classic comics plot arcs and helped adapt economic anthropology to graphic storytelling.

A portrait from the shoulders-up of a man in a hazmat suit and respirator with closed eyes and ears sticking out of the helmet. He wears a wide-brimmed hat and is holding a jug with condensation on it, and a cup with a straw. In the background, palm trees. Text reads, “…we did nothing but listen, and like he said, when he was done, everything was clear. Clear enough to fill us with terror. Clear enough to full us with wonder. Clear enough to fill us with cariño and laughter. But we won’t jump ahead, we want to tell you the story of Don Wilfrido, the Paraguayan Eternauta just as he told it to us!”
Credit: Caroline Schuster, Enrique Bernardou, and David Bueno 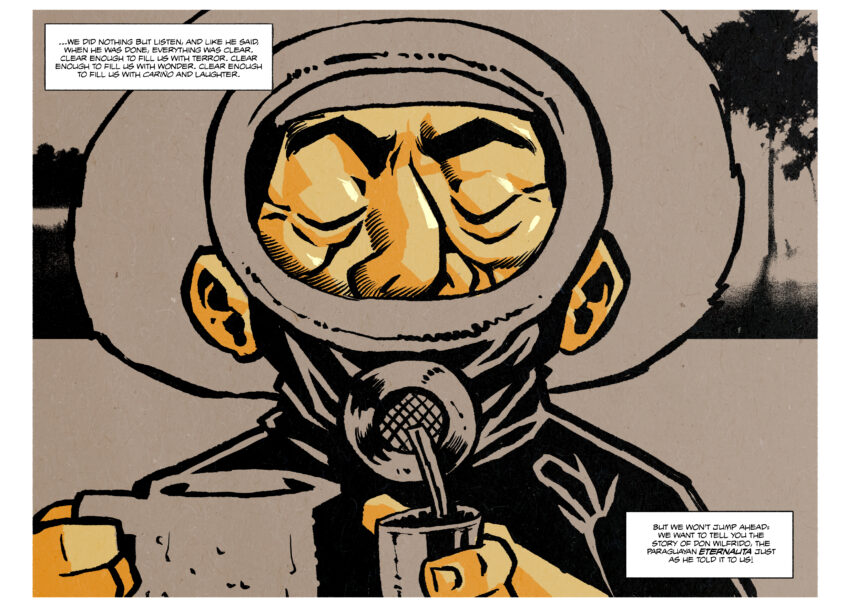 The importance of graphic narrative as a unique cultural form in Latin America has deep roots and a long history. This history was just as, or perhaps more, significant to our collaboration as the plot mechanics derived from European heist comics. While much of the discussion about the graphic turn in anthropology has focused on the rich tradition of drawing and creativity in the discipline, comparatively little has been said about the diverse graphic traditions in our fieldsites.

Fans of Latin American historietas (cartoons) might immediately recognize the comics pages presented here as a loving homage to Argentinean writer Héctor Germán Oesterheld’s famous work El Eternauta (The Eternaut). With illustrations by Francisco Solano López, the serialized comic strip was originally published between 1957 and1959, and later collated in 1969 with a sequel published in 1975. A year later, Oesterheld was disappeared and presumed murdered by the neo-fascist military junta that rose to power in Argentina in 1976. Although his adventure comic follows the protagonist, Juan Salvo, as he travels through time after an encounter with alien tech and a toxic snowfall that wipes out any humans it touches, El Eternauta was widely read as social and political commentary. Argentina’s tradition of cultural critique through graphic illustration going back to the nineteenth century positioned comics as “serious” literary material, akin to Art Spiegelman’s Maus in the United States. Through the lens of graphic narrative, we can consider the social, political, and historical forces that shape Latin American reading publics.

In our recreation of El Eternauta as an anthropological comic, we see a Paraguayan farmer, Don Wilfrido Medina, slowly transmogrify in the café where we worked to write and draw his story. The opening page of El Eternauta introduces the figure of the Writer, el guionista, his expression astonished as Juan Salvo appears out of thin air in front of him. For our Paraguayan comics studio, the storyteller did not appear out of nowhere as an imaginary character, but rather is embodied by a real person whose story we tell in our graphic ethnography; Don Wilfrido is himself a gifted and dramatic narrator, our ethno-eternauta. We play with the instantly recognizable cover design of Juan Salvo in his time jumping Eternauta hazmat suit, and consider how Don Wilfrido might fill that role, imagined here sipping yerba mate.

The confluence of comics as social commentary, comics and speculative narrative, and comics as complex partnership between storytellers and artists, is beautifully distilled in the fourth-wall-breaking opening page of Oesterheld’s historieta. It gives us important tools to do graphic anthropology from within Latin American graphic narrative.

If you’d like to read more graphic ethnography in Anthropology News, be sure to check out our Graphic Ethnography issue.

Caroline E. Schuster is a senior lecturer in the School of Archaeology and Anthropology at the Australian National University where she researches and teaches on economic and environmental anthropology. She is the lead writer of the forthcoming graphic ethnography Forecasts: A Story of Weather and Finance at the Edge of Disaster. You can follow her anthropology tweets @CarlySchuster

Enrique Bernardou is a freelance illustrator and graphic designer, having trained at the National University of Asunción, Paraguay. He also teaches drawing and animation. You can find follow his work on Instagram @ebernardou

David Bueno is a commercial graphic designer and freelance illustrator based in Asunción. He is an avid cinephile, drawing inspiration from film for his art practice. David specializes in the most badass monsters in the great comics tradition of Mike Mignola. You can follow his work on Instagram @davidbuevil