A prize-winning book supports teachers to define their praxis, humanize their learning spaces, and reimagine the teachers they want to be.

This column is based on Kiyomi Sánchez-Suzuki Colegrove and Jennifer Keys Adair’s new book, Segregation by Experience: Agency, Racism, and Learning in the Early Grades, as well as their experiences using the book in teacher education. Segregation by Experience won the 2021 Council on Anthropology and Education Outstanding Book Award, Find out more about the annual CAE book award and the nomination process on the CAE website.

Segregation by Experience: Agency, Racism, and Learning in the Early Grades centers on the Agency and Young Children Study, a video-cued ethnographic (VCE), multisited project that began in a first-grade classroom led by Ms. Bailey, a multilingual Burundian immigrant who speaks four languages (Adair, 2014). Video-cued ethnography is a method divided into three phases that combines traditional ethnography with comparative multivocal video-cued ethnography (Tobin, Hsueh, & Karasawa, 2009). In our case, phase one consisted of a traditional one-year ethnographic study with Ms. Baileys’ first grade classroom. Ms. Bailey’s class served primarily Black and Latinx children, many of whom spoke more than one language. The class had multiple opportunities to enact their collective and individual agency as part of their learning. The children could move around, discuss ideas, work together, design projects, initiate activities, talk about their real lives, and help one another.

In phase two of our study, halfway through our year with Ms. Bailey, we filmed and edited a video of a “typical” day at the site, resulting in a 20-minute film. The film was in English with Spanish subtitles for interview purposes. Ms. Bailey helped us edit and attest to the typicality that we intended to capture in the film. Additionally, the film was shown to students and parents in Ms. Baileys’ classroom.

Six students are seated in a classroom at tables perpendicular to a screen on which a video is being projected. Some are watching the video and others are taking notes.
Credit: Kiyomi Sánchez-Suzuki Colegrove 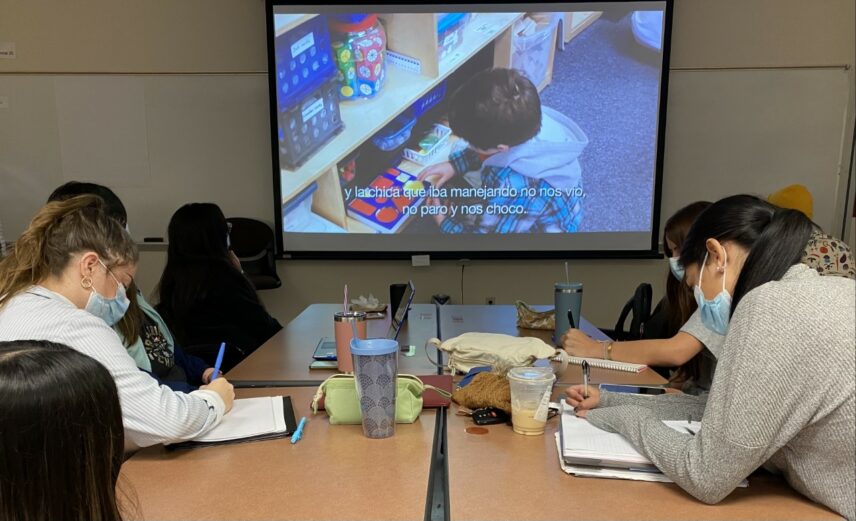 Undergraduate students in the bilingual teacher preparation program watching the “Agency and Young Children” video clips after reading a chapter from the book.

After our year with Ms. Bailey, during the third phase of our study, we spent three years showing the 20-minute film of her classroom to over 250 superintendents, principals, teachers, immigrant parents, and young children aged five to seven across Texas. The viewers had complicated, often negative, responses to what they saw. We learned that educators admired the teacher but didn’t think her practices would work with their own Black and brown students. Parents of color—many of them immigrants—liked many of the practices but worried that they would compromise their children. The young children who viewed the film thought that the kids in the film were terrible, loud, and badly behaved; they told us that learning was supposed to be quiet, still, and obedient.

We tried to make sense of what the interviews, the film, and the negative reactions to the film meant for the “great equalizer” of early education. Informed by Charles Mill’s concept of the Racial Contract and the work across Latinx, Indigenous, and Black diaspora theorizations of race and white supremacy, our study showed both the scarcity of agency in early learning for children from BIPOC communities and the ways in which white supremacy and racism impact what we offer young children at school. It took months to find Ms. Bailey’s classroom―a school space that welcomed children’s agency. The dozens of schools and classrooms we visited that served communities of color prioritized compliance and obedience in dehumanizing, deficit-oriented ways. Through Segregation by Experience, we wonder what would it mean to embrace children’s full personhood at school? And, what does it mean for children, families, teachers and administrators to see school learning as something that requires obedience rather than their full personhood?

One of our most important goals in writing Segregation through Experience was to offer an approachable, descriptive, and vivid version of our research to a spectrum of school stakeholders. We wanted graduate students, pre- and in-service teachers, and anyone involved in educational decision-making to learn from (and be humbled perhaps) by those we learned from.

Student responses to Segregation by Experience

After nine years of carrying out our study and writing it up, with Segregation by Experience finally in our hands, we felt eager to share it with our graduate students and undergraduates in our teaching preparation programs. So far, our students have responded to Segregation by Experience in complicated ways. They are fascinated with Ms. Bailey because of her ability to create a community that few have experienced themselves. They generally appreciate how she carves space and time for learning even with busy schedules and scripted curriculum. They like how Ms. Bailey stops herself from intervening and, instead, lets children guide their learning whenever she can. Most of our undergraduate and graduate students want to create a sense of community and safe space for learning when designing and leading their classrooms. However, with high-stakes testing requirements and the heavily controlled environments these requirements produce, our students do not see or experience agentic kinds of learning. This lack of agency experienced by young children of color and the teachers who work with them is what most of our students witness in their student teaching placements. When they read how Ms. Bailey prioritized community, learned about her students’ interests, learned about their families and their stories, and saw her encouragement of agency and collective responsibility, most students were stunned by what they read. They also felt sad and frustrated that they did not experience such a learning environment and because the children in the classrooms they work in do not experience such a space. The students in Ms. Bailey’s class participated, shared their stories, followed their interests and created a collective community for learning because Ms. Bailey prioritized their experience over the governance of the school.

Our study demonstrates what a politically complicated act it is to offer young children of color agency in their learning. Many undergraduate and graduate students are unsure of how Ms. Bailey was able to accomplish such a sophisticated and agentic type of teaching. Throughout our book we attempt to humanize Ms. Bailey’s teaching practice through sharing interviews and observations that reveal how difficult and demanding it was for her to enact her own agency. In chapter five of our book in particular, our students get a sense of Ms. Bailey’s vulnerability as she was challenged by school leadership to make her class quieter and more compliant.

Graduate and undergraduate students alike see Ms. Bailey’s story as a guide for how to be more intentional in their teaching goals and practice, but also as a warning against overidealized anti-racist curriculum or structured attempts towards equity that negate agency. As one of our students described, “You are planning on what you need to do to recreate that space. You are using Ms. Baileys’ example to have discussions and to mentally prepare for the action of teaching and think in your practice.”

Using the Segregation by Experience book and videos together

As an extension to our use of multivocal video-cued ethnographic methodology, we decided to have our students read and discuss Segregations by Experience as well as watch some of the scenes from Ms. Bailey’s class. Our undergraduate and graduate students are the most recent voice in the multivocal aspect of the VCE method. The discussion process we used included watching a scene from Ms. Baileys’ classroom, discussing a chapter, and student reflection on their own schooling experiences and classroom observations. It also included students reimagining their teaching.

During discussions, when students turned to their own schooling experiences as they reflected on the teacher and students in the film, they also used the film to mentally plan what they needed to do to recreate that teaching and learning space. In that process, their prior experiences and beliefs were challenged by the film and the discussions around the book. This reflective process was helpful for students who work with young children as they went back to their preschools and classrooms and reformulated their assumptions while changing their practice. For example, a student who works in a preschool with three- and four-year-olds shared that she enforces straight lines with bubbles in their mouths, but as we talked, she found the idea idiotic and decided to change it the next day. The following week she shared that there was no need to keep children in lines or pretend they have bubbles in their mouths. She added that in her mind, that was the way it was. That’s what she did as a child. So, it made sense to perpetuate it. She had never before thought to question that practice until she read it in the book. The VCE method allows for participants to become reflective of their practices, so the process of sharing becomes natural and comfortable.

Dialogue is crucial to participate in conscientização and praxis as current and future teachers reimagine and wish for different experiences for their students. One critical issue in teacher preparation is that coursework and research often show pre-service teachers’ ways of teaching and learning they never experienced themselves. So how do we―in teacher preparation―expect them to enact practices they have only seen in books? Through dialogue and discussion around our book, we support pre- and in-service teachers to define their praxis, humanize their learning spaces, and model the use of time to build communities to create and reimagine the teachers they want to be and the practices they wish to enact.

Kiyomi Sánchez-Suzuki Colegrove is an associate professor in Early Childhood Education at Texas State University. She uses video-cued ethnography to understand the relationship between Latinx immigrant parents and schools and to privilege the parents’ voices.

Jennifer Keys Adair is associate professor of Early Childhood Education at the University of Texas at Austin. Trained as a cultural anthropologist, she uses ethnography—particularly video-cued, multi-sited, comparative ethnography—to study the impact of racism and white supremacy on young children's early schooling experiences. Her work argues for community-centered, qualitative work as the foundation for racially-just early childhood policy and funding decisions.