Exploring the Aesthetics of Nostalgia in Contemporary Hong Kong

Editor’s note: This piece is part of a SEAA column themed series “Cultural Consumption and Performance in Asia.” The articles highlight different aspects of consumption and performance in a range of Asian regions. They examine issues such as cultural curation, the uses of the past, material culture, power and market, as well as the enactment of lived experience.

Undeterred by the Hong Kong summer temperatures, large numbers of visitors entered the former colonial police force quarters now known as the PMQ (short for Police Married Quarters) heritage space, keen on catching a glimpse of the displays. As part of the government-initiated Heritage Vogue street carnival celebrating Hong Kong’s past, PMQ sought to transport visitors back in time to the mid-twentieth century. PMQ erected stalls resembling sidou, old-fashioned corner shops decorated with Chinese banners and European tiles, painted a shade of “grassroots green” that was introduced to the city during the colonial era. Stalls sold street foods such as curry fishballs and ice lollies, along with White Rabbit candies, Coca-Cola and Vitasoy beverages in glass bottles, staples in the city since the post-war years. Cantonese opera was broadcasted over the PMQ courtyard where wooden tables and plastic chairs were provided for visitors, making the space resemble daipaidong, traditional street eateries. Visitors enthusiastically interacted and took photos with the displays, claiming to remember such sights from their childhood, with some parents telling their young children that what they saw at the PMQ that day is what Hong Kong’s past looks like.

Since Hong Kong ceased to be a British colony (1841–1997) and became a Special Administrative Region (SAR) of the People’s Republic of China, the city has been engulfed by nostalgia, broadly defined as a yearning for a past that is absent in the present. Hoping to study this phenomenon in 2017 and 2018, I visited a number of heritage sites in the city, and interviewed individuals from community organizations addressing heritage concerns, those producing and managing heritage sites, and those interested in heritage issues but not involved in the running of heritage spaces. This essay features the opinions and views from the third category of informants, whom are mostly in their 20s and 30s, to portray general Hong Kong public sentiments towards heritage.

Many of these informants celebrated—and many of the heritage spaces I visited sought to embody—representations of what is colloquially termed gauhoenggong (Old Hong Kong). This “Old Hong Kong” aesthetic references the period from after World War II until the mid-1980s, a time when the city experienced rapid demographic and economic growth, infrastructural redevelopment, and the emergence of a local Hong Kong identity and culture among ordinary inhabitants of the city. It is an aesthetic that informants believe to be disappearing due to urban redevelopment schemes and infrastructural projects in the city, thus exacerbating nostalgic attachments among the populace. 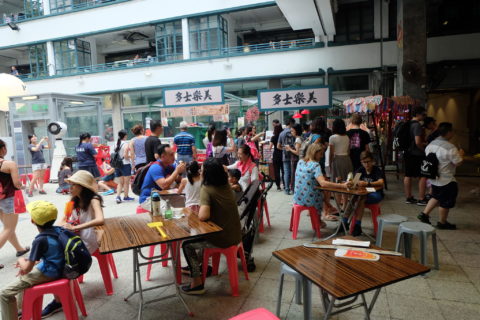 Although the “Old Hong Kong” aesthetic is situated within the colonial era, this nostalgia cannot be conflated with a yearning for the colonial. Colonial presence permeated multiple facets of post-war life, through government regulation of housing, business, healthcare, and schooling. Yet colonial institutions and figures have a marginal presence in the imaginings of “Old Hong Kong” espoused by most informants. In their narratives of “Old Hong Kong,” the “colonial” is rendered as little more than what one individual describes as “quirky” western stylistic and cultural elements leading to the production of syncretic practices and landscapes, fixtures that have since come to define the city. Examples include shop houses sporting a combination of Asian and European architectural features (such as Chinese-style tenements with French windows and balconies), English and Cantonese code-mixing in colloquial speech (now termed as Hong Kong English), and Hong Kong-style Western cuisine (such as macaroni served in broth with fried eggs).

Rather, informant understandings of “Old Hong Kong” emphasize neighborhood networks and conviviality among ordinary people that informats believe to have been prevalent in the post-war years. Informants reminisce about the grassroots resilience, adaptability, and industriousness that are components of the sizisan zingsan (Lion Rock Spirit), a set of values that have come to define the Hong Kong person. Discourses of “Old Hong Kong”are presented as the heritage of the vernacular; certainly, the majority of informants accept this aesthetic as a reflection of their past.

The “Old Hong Kong” aesthetic has become popular throughout society, as seen from the proliferation of literature and digital platforms exploring this period of the city’s history. Images and objects reflecting the syncretism of “Old Hong Kong” are now in-demand consumerist goods, with local and international businesses capitalizing on this by designing their premises and selling products adorned with mid-twentieth century motifs (see Starbucks HK 2018; TenTen 2017).

There are several reasons behind the popular appeal of the “Old Hong Kong” aesthetic. First, it reframes colonial presence in the city as an aesthetic category, obfuscating the problematic politics associated with colonialism. This accompanies an emphasis on positive emotions evoked through heart-warming narratives of community cooperation and care, dispelling negative feelings that conversely “suspend any aesthetic appreciation” within the individual (Ranciѐre 2007: 26). Lastly, the “Old Hong Kong” aesthetic is not so temporally distanced as to be alienated from present-day urban experiences. It is a period still within the living memory of the older generations, with relateability and verity. More importantly, its evident disappearance from the social and physical landscape as a result of urban development, enhances the societal urgency to value, embrace, and protect it. 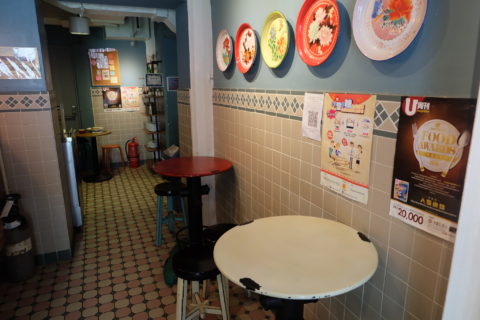 The Stone Houses café, styled as a traditional diner from the “Old Hong Kong” era. The Stone Houses were used as residential units throughout history, and never had a café on the premises. The sense of historicity embodied by the café has been deliberately constructed and imposed on this space. Sonia Lam-Knott

The popularity of the “Old Hong Kong” aesthetic has ramifications for heritage spaces, defined here as landmarks and sites that have been present on the urban landscape since the mid-twentieth century rather than museums constructed to house historical artifacts in glass cases. Heritage in Hong Kong is a contested domain, with the government and civil society (comprising neighborhood community organizations and activists) diverging on what constitutes the city’s heritage. It is a city that desires to remember the past, yet what constitutes the city’s memory remains elusive. The question is not simply a matter of how to remember, but what to remember. There is no singular nostalgic narrative that prevails in Hong Kong, and heritage sites are where differing interpretations of the past are currently curated, produced, and presented to the public. Heritage spaces in Hong Kong strive to inculcate and reinforce their imaginings of the past—informed by their nationalist or localist agendas—within their visitors. Their ability to do so depends on whether they are able to reach out and engage with the public in the first place.

Attuned to the current trends regarding societal consumption of the past, heritage spaces seek to attract potential visitors by incorporating the “Old Hong Kong” aesthetic, what visitors want to see in spaces representative of the past. Mei Ho House in Sham Shui Po, a remnant of an early public housing project managed by the Youth Hostel Association, established a store and a café infused with “old-time” elements for visitors to have “nostalgic fun”. Similarly, the Stone Houses in Kowloon City, historically a residential unit, opened a “themed café” resembling a bingsat (traditional diner). As mentioned earlier, PMQ erected temporary stalls styled as sidou selling retro goods and foods and filled the courtyard with old-fashioned games and furniture that proved popular with visitors.

Heritage sites must mediate between their role as the curators and educators of history, whilst meeting visitors’ preconceived expectations of what the city’s past looks like based on their exposure to aestheticized imaginings of “Old Hong Kong.” The “Old Hong Kong” aesthetic, however, is not immune from criticism. Several younger informants lament that the use of such nostalgic styles by heritage sites to attract and generate amusement among visitors, offers little more than visual gratification. Such “feel-good” displays omit the complex realities of the city’s historical experience. By incorporating the “Old Hong Kong” aesthetic, heritage sites become complicit in propagating overly-simplistic and sanitized visions of the past to the public. Conversely, by desiring and unquestioningly consuming these selective representations of history, the public has similarly become complicit in this process, denying heritage spaces the opportunity to espouse visions of history that deviates from this idealization of ‘Old Hong Kong.’

Sonia Lam-Knott is a postdoctoral fellow at the Asia Research Institute, National University of Singapore. Her research examines vernacular experiences of socio-political and economic change in contemporary Asian cities. Of particular interest is the relationship between nostalgia and aesthetics, grassroots subjectivities and mobilizations, along with urban contestations and aspirations.