During a recent trip to the Andean-Amazonian foothills of Southern Peru, I hiked out to a remote corner of the agricultural frontier to visit some old farmer friends as they attended a coffee cultivation workshop. Two of the farmers were Indigenous Matsigenka people, whose ancestors had lived on that land long before the commercial agricultural economy arrived at their doorstep in the 1980s. The other four were Quechua-speaking settlers, who had migrated there from various parts of the rural Andean highlands in search of land and a better life. None of these people had any experience with coffee farming until a decade or two ago.

When I arrived, my farmer friends were talking with an agronomist in a leafy clearing behind one of their homes. The agronomist had been sent by the state agricultural development program (these people are sometimes called extensionistas [extension agents]), and he was responsible for helping farmers increase the quality and quantity of their coffee production. The farmers sat in silence on a wooden bench and nodded along as the agronomist delivered a long and complicated presentation in a technical register of Spanish about how to achieve export-grade coffee. At one point in his presentation, he held up a small branch from one of the farmers’ coffee plants, from which dry, yellowed leaves and a few withered coffee fruits hung limply. He pointed to the fruits and explained the problem:

A photograph of green rainforest with a road or track curving from the foreground to the left of the image. Trees have been cleared to low plants in the foreground, with taller trees in the middle distance, and low clouds and what looks to be a green mountainside rising in the background.
Credit: Nicholas Q. Emlen 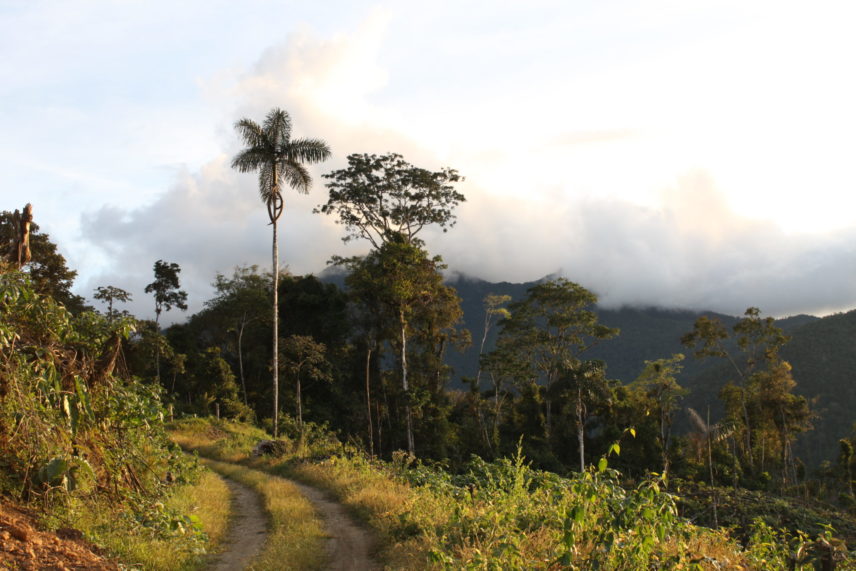 Indeed, coffee plants require a precise ratio of soil nutrients to produce large quantities of high quality fruits. However, the farmers learned, their soils contained different proportions of these invisible substances from one plot to the next, especially after years of coffee farming. This made it necessary to test the soils periodically and to introduce a carefully composed cocktail of commercial fertilizers. And so it was that the Matsigenka farmers began to use Spanish words such as boro (boron) and magnesio (magnesium) for the first time—words that described a particular type of deficiency in the landscape on which their ancestors had planted manioc, gathered berries and wild honey, and hunted animals that, according to Matsigenka cosmology, had once roamed the world as ancient humans. This was a new way of talking about the land.

In order to achieve the necessary ratio of soil nutrients, the agronomist continued, the state would bring its techno-scientific powers to bear on the land:

Here, in the space of a half minute, the farmers found themselves transported from the earlier lesson about soil chemistry into a warning about the region’s labor economics: one must be careful not to fertilize a coffee plantation so thoroughly that it exceeds the availability of workers to harvest it in this remote, sparsely populated valley. The farmers were thus compelled to make a series of calculations: What is the largest quantity of coffee that they could feasibly bring to market? Could they depend on ayni (a sort of reciprocal labor among family members), as small-scale Matsigenka coffee farmers usually do, and which is a natural fit for the general Matsigenka tendency to limit interactions to one’s own kin? Or would they need to look beyond their kin networks, and pay cash to seasonal migrant laborers from the highlands? If so, where would they get that cash, where would they find the workers, and where would the workers be lodged? An unfamiliar discourse about soil chemistry had turned, seamlessly, into an unfamiliar discourse about the complexities of regional labor economics and the politics of personal relationships with nonkin. This was a new way of talking about the social world.

Two men stand on scree-strewn ground. The man on the left wears boots, long shorts, a white collared shirt, a mustard-colored vest, and a baseball cap. He has his left arm around the shoulders of the second man, who is wearing shoes, long black shorts and a long light-purple colored t-shirt. A valley and mountains lie behind them.
Credit: Nicholas Q. Emlen 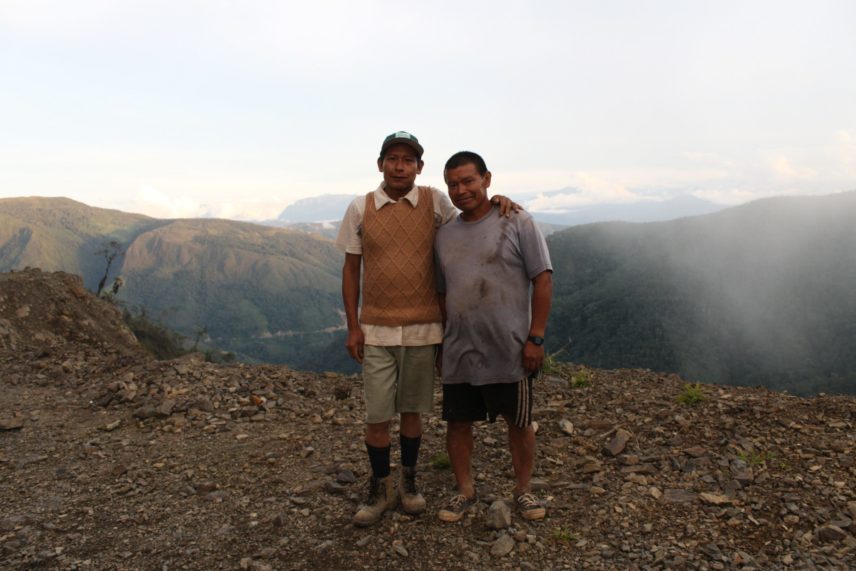 The brief excerpts above from the agronomist’s presentation show just how much can happen during an agricultural training workshop. On the surface, we might imagine the process of becoming a coffee farmer as a straightforward matter of learning to grow plants, harvest fruits, and process beans (and of course one cannot produce coffee without these skills). However, incipient coffee farmers in this region—especially Indigenous Matsigenka people, but also Andean migrants—experience the process as a more fundamental cultural and even ontological reorientation to the landscape and the social world. Variations on this problem are well-known in anthropology: people experience the discourses and practices of the globalized economy through local systems of meaning. Yet what is important to recognize here is how these transformations are mediated through the cultural routines and assumptions that come to the surface in face-to-face interactions—that is, linguistically—like in this workshop. Sitting on these benches and talking in these ways is how people become coffee farmers, not just in a narrowly technical sense, but as a broader matter of learning to conceptualize the world in terms of boron, magnesium, cash, and employable strangers.

Indeed, when I ask my friends in this region about the most vexing aspects of their new economy, they sometimes converge on a common theme: it’s all the talking. What really keeps them awake at night isn’t the techniques of physical labor, but rather the incantations of official acronyms in dusty government offices; the ritual requesting, signing, stamping, and filing of forms in triplicate; the judicious management of information through roadside gossip; the subtle verbal combat of negotiations with coffee merchants; and the endless onslaught of techno-scientific verbiage in training workshops like this one. Consider my Matsigenka friend, Antonio, who spent a panicked morning trying to pass a message with anyone who might encounter José, a merchant who had arranged to buy his coffee sacks that afternoon. There had been a landslide on the road, but José would not learn this until it was too late; he would be forced to turn back, missing his appointment with Antonio, whose coffee would be left to rot on the roadside. Without cell phone coverage, Antonio scrambled to find any communicative solution that he could, including desperate word-of-mouth missives, and, eventually, a three-hour hike to the region’s only solar-powered pay phone, to request that the region’s major radio station broadcast his message across the valley. These are all language problems. And like all language problems, they require navigating different spaces, different social networks, different linguistic codes, different institutions, and different conceptualizations of appropriate and effective communication, as defined within the cultural context of the agricultural frontier. Farmer talk, thus, is forbidding to its novices because it is at once impalpable and all-encompassing; it goes mostly unremarked and undefined, yet it draws into itself the entirety of the local social universe, and lies at the heart of the region’s economic life.

Entry into this linguistic-economic milieu is most forbidding for Matsigenka people in the remotest communities. These people tend to have little experience with the linguistic and cultural presuppositions of farmer talk, but they have little choice but to embrace the agricultural economy that has come rampaging, uncontrolled, through their forests. With their hunting grounds deforested and their streams choked with mud, they must now buy food with money earned from cash cropping. Here, the story about language and food—as it does so often—also becomes one about environmental devastation and social inequality.

Linguistic anthropologists have long taken interest in the relationship between language and food in all of its forms, from production to circulation to consumption (see Cavanaugh et al. 2014; Karrebæk, Riley, and Cavanaugh 2018 for recent reviews). And for good reason: there is little that defines day-to-day human experience so comprehensively, and that is so heavily laden with semiosis, than talking and food. In the Andean-Amazonian foothills of Southern Peru, where tens of thousands of people are joining the coffee economy for the first time, the largest and most complex part of farming is linguistic labor; conversely, it is impossible to imagine the region’s habits of speaking except as they are embedded in the daily rhythms of agricultural life. Here, to farm is to speak, and to speak is to farm.

This research is funded by the Deutsche Forschungsgemeinschaft (DFG, German Research Foundation)—project number UR 310/1–1 and European Research Council (ERC) under the European Union’s Horizon 2020 research and innovation program (grant agreement no. 818854—SAPPHIRE).

Nicholas Q. Emlen is a linguistic anthropologist at the Leiden University Center for Linguistics and DFG Center for Advanced Studies “Words, Bones, Genes, Tools,” University of Tübingen. He has conducted extensive ethnographic research on multilingualism, language contact, and coffee production on the Andean-Amazonian agricultural frontier of Southern Peru. His first book, Language, Coffee, and Migration on an Andean-Amazonian Frontier was published in 2020.