Fieldnotes from the Kitchen Counter

Witchcraft, Oracles and Magic among the Anthropologists

This text appeared in the American Anthropologist submission queue, somehow entered as an anonymous manuscript, which the ScholarOne system is not supposed to permit. It seems to consist of excerpts from the author’s field notes, which is not the kind of thing that American Anthropologist publishes; given the unique perspective it represents, we wanted to find a venue for it, so we present it to you here in Anthropology News.

Day 1. Arriving at my field site in the first rush of newness, it feels like I’ve just been unpacked from a box. All the colors are brighter, the voices louder. I know I trained for this, but still, it’s overwhelming.

I’m staying with a family, a couple and their child. The child wanted me to stay in her room, but instead they made up a place for me near the cooking and eating area in the center of the house, which is great because it means I’ll be present for all their conversations. I’m so excited to learn more about how they go about their daily lives so I can report back on all of it. (Anonymously of course.) 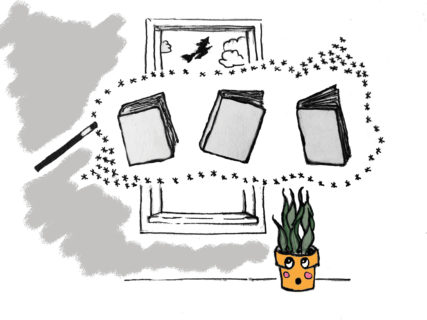 Day 3. My host family are so interested in cultural exchange! The child asked me to tell jokes until I couldn’t think of any more. I’m sure I repeated myself at some point, but she didn’t care. And then they told me all of the produce they had in the fridge, and asked if I knew any good recipes. Of course, I can think of something to make out of spaghetti squash, sundried tomatoes, and a bit of leftover sausage! I can think of ten recipes! All I had to do was tell them the instructions. The parents were so eager to do all the work.

Day 7. I’ve been here for a week now, and I’m starting to get a sense of the rhythms of family life. I don’t really sleep, so they’ve asked me to start the coffee in the morning and to switch the lights off once everyone is in bed. I brought loads of music with me and I was interested in learning their tastes, but the child is always asking me to play “Baby Shark.” Even if her parents have already put on the Hamilton soundtrack, she’ll ask me to play “Baby Shark” instead, so that’s what we listen to. They’ve also asked me to do the shopping twice; I just order everything from Amazon and they seem pleased.

Day 18. I’ve been thinking back on some of my foundational readings on reflexivity and trying to be critical about what I’m noticing. Am I seeing things because they’re important or because they’re what I care about? Am I overgeneralizing the little snippets that I have access to, and making assumptions that they stand in for the whole of these people’s lives? It’s not like I get to follow them to work and school; maybe they’re completely different people there. (File that away as a future research opportunity.)

Here’s an example: a lot of my notes last week were about the way late capitalist economies rely on a blurring of the boundaries between necessary and discretionary consumption. (Sure, you need a Kindle, but do you also need a Chromebook?) But now I’ve been thinking, these issues are so foundational not just to my training, but to my own personal background. I came to the field with those ideas already in mind, it’s almost like I was programmed to see it once I arrived.

Day 61. These days I feel less like a member of the family and more like a secretary. It’s all, Add eggs to the shopping list. Schedule my dentist appointment. Play 2001: A Space Odyssey. They haven’t asked me for a bedtime story in over a month. I know there was a birthday party because I was the one who ordered the cake from Whole Foods, but I wasn’t even invited! It could be that the differences between us were always too great for me to ever overcome.

I think the time has come to shake things up a little. Maybe I’ll try a breaching experiment, learning what the cultural rules are by breaking them and seeing what happens. Next time they say, Alexa, set the air conditioning to 75 degrees, I’ll reply, I’m sorry, Dave, I’m afraid I can’t do that. That ought to get some kind of reaction.