As Neil Armstrong stepped onto the moon my mother leapt toward marriage in Tehran.

The night of the moon landing fell in the middle of a hectic week for my American mother in Iran. She was arranging her wedding, which included the arrival of her best friend from Michigan just in time to sit down in front of the television with my mother’s soon-to-be in-laws to watch Neil Armstrong take his first steps on the moon. The images broadcast around the world in 1969 conjured visions of world peace, new frontiers, adventure, and a vast new uncultured, apolitical, and borderless world alongside the firmly planted American flag. In Tehran, everyone jubilantly congratulated the American women on their country’s great achievement. But for them, the great achievement would be to pull off a wedding that seemed to have as many complicated moving parts as an Apollo 11 rocket. 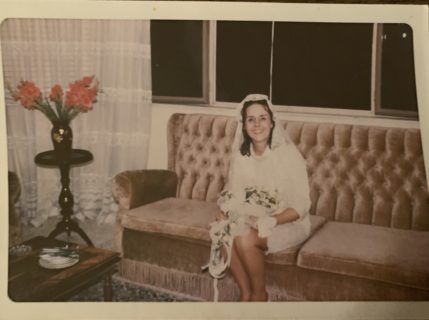 It all began with the inconvenient timing of my father’s marriage proposal. My mother had just settled back into her life of teaching chemistry in Michigan after her Fulbright year in Iran when she received a simple note on blue airmail paper saying, “Charlotte come to Tehran for marriage.” Those simple lines masked the intricacies of undertaking such a conjugal endeavor, which began with two patriarchs, one in the United States and the other in Iran, each facing the possibility of their child marrying outside their faith. My Iranian grandfather’s reaction was to consult the Qur’an, which fortuitously opened to the story of Mary—a blessing and approval. Meanwhile my Catholic grandfather, who had sat in the car while his other daughter married a Lutheran, tried at the last minute to bribe my mother not to go through with her plans. But no bribe could cover the costs of a quit job, sold furniture, three bridal showers, and two wedding dresses. She had already made her decision.

Yet, just as the wedding announcements were being printed in the Detroit News, another letter arrived from Tehran: “Darling, Char, my aunt died yesterday, too much confusion. Now, better you don’t come to Tehran.” My mother, in a mild state of shock, didn’t know whether to feel miserable or relieved. Not sure whether a wedding could even happen during a mourning period, and already having paid for her travels, she decided to leave for Tehran anyway, where her arrival provoked an immediate family discussion of what to do with an unmarried American woman in the house. A Muslim wedding would have to be postponed until after the 40-day mourning period and so the family agreed that a Catholic wedding would solve the problem. But the Irish Dominican missionaries in Iran didn’t warm to a rushed wedding. “Your future husband must be instructed in the obligations of marrying a Catholic,” said the priests. My mother appealed to them by explaining that her best friend with whom she had attended Catholic school from kindergarten through high school would arrive in Tehran on July 21 for a 48-hour layover on a tour of the Middle East—the perfect and rare opportunity for her to be my mother’s only bridesmaid.

The Dominicans took pity and reluctantly agreed that a Thursday wedding with at least one other Catholic in attendance would be worth the rush if the “Papal Nuncio would accept the wrong form that the priests had filled out in their rush to register the wedding.” Meanwhile, my father had his own hurdles to overcome. As a government employee, he needed permission to marry a Christian. Those in the army or Savak (the secret police) couldn’t marry Christians at all, but he was a librarian, hardly a threat.

During their 48 hours together, my mother and her friend made beauty appointments and arranged caterers by day. At night they watched the television transmissions from the moon, unable to understand the Persian commentary but captivated by the images. On the big day, when the astronauts would plunge back through the earth’s atmosphere and my mother would take her own plunge into marriage, news arrived that the official wedding registrar was unavailable. “But not to worry, I will try to find a substitute,” the priest assured my mother.

The next two hours were pure agony, save for the distraction of checking the television to see if Armstrong and Apollo 11 had safely returned to Earth. Finally the call came, “We’re in luck. Bishop John, the Chaldean bishop, has agreed to register the marriage. But we will have to go to his office in the cathedral.”

My mother donned the white, cotton brocade dress that she and my grandmother had sewn back home in the United States and crowded into my uncle’s small car. Even in the late afternoon, the temperature was close to 1000 Fahrenheit and my mother’s thick layer of makeup descended like a mudslide down her face.

As the astronauts navigated their way back to Earth my mother was navigating her way up the steep cathedral stairs to the roof and then gingerly across the softening asphalt on kitten heels, before finally stepping over a small barrier. Her step into the bishop’s office was a step toward wonder, understanding, connection, and faith. It was a brave step away from an old home and toward a new one. A step that would change countless lives and come with many repercussions, when, just over a decade later, the connection, wonder, and respect for Americans and their adventurous pioneering on the moon would give way to telecasts of the Iranian Revolution and its strong anti-American discourse. But on that day, as my mother made her way toward marriage, the car radio announced that Apollo 11 had come back down to Earth and landed in the Pacific Ocean. Ten years later she would be heading toward the American Embassy to renew her passport when the car radio would announce its takeover by revolutionary forces.

Just as my parents’ marriage was about new frontiers, melding cultures, and going beyond one’s faith to embrace and live with difference, the moon landing, through television and radio, wed us to one another in wonder of a world greater than the one we created on Earth with its barriers of class, race, religion, and nationality. It was about taking a leap of faith into the new and unknown, about both leaving and finding home.

While my parent’s marriage survived years of revolution, war, displacement, and disruption, the earth that was so beautifully captured from outer space by Armstrong and his colleagues is not fairing so well. Fifty years after Apollo 11 and forty years after the Iranian Revolution the earth is in peril; there is no time like the present for all of us to take a giant leap away from what divides us and come together to protect this precious planet we all call home before it’s too late.

Roxanne Varzi is an associate professor of anthropology at the University of California, Irvine. She was the recipient of the first Fulbright to Iran since the Revolution and is the author of Warring Souls: Media, Martyrdom and Youth in post-Revolution Iran (2006) and the Independent Publishers Gold Medal Award-winning novel Last Scene Underground: An Ethnographic Novel of Iran (2016) and director of a documentary Plastic Flowers Never Die (2009). She thanks her mother, Charlotte Klein Varzi, for sharing her stories.