Forensic Anthropology in a Changing Climate

In 2018, a wildfire swept through Northern California. Forensic anthropologists were called in to identify skeletal remains in a devastated recovery scene.

In a smoke-filled parking lot, our team of anthropologists lined up, outfitted in protective gear and ready to receive search and recovery assignments for the day. After a long morning of planning, we climbed into small buses to travel to the fire-ravaged town of Paradise. The bus dodged downed power lines and drove around burned trees in the street; homes and businesses were destroyed. After 30 minutes of driving, we arrived at our first location. Each long field day brought new challenges, as teams combed through burned trailer homes, single-storey residences, and apartment complexes in the search for human remains.

The early morning hours of November 8, 2018, were witness to the start of the Camp Fire, the most destructive and deadly fire on record in California. The fire began near the community of Pulga in Butte County, located approximately 95 miles north of Sacramento, California, and about 135 miles west of Reno, Nevada. Fueled by intense winds, the fire quickly moved west to the neighboring rural foothill communities of Concow and southern Magalia, and southwest to the city of Paradise. In roughly 12 hours, this rapidly moving fire nearly destroyed these areas and was ultimately responsible for the devastation of roughly 150,000 acres and 19,000 structures. 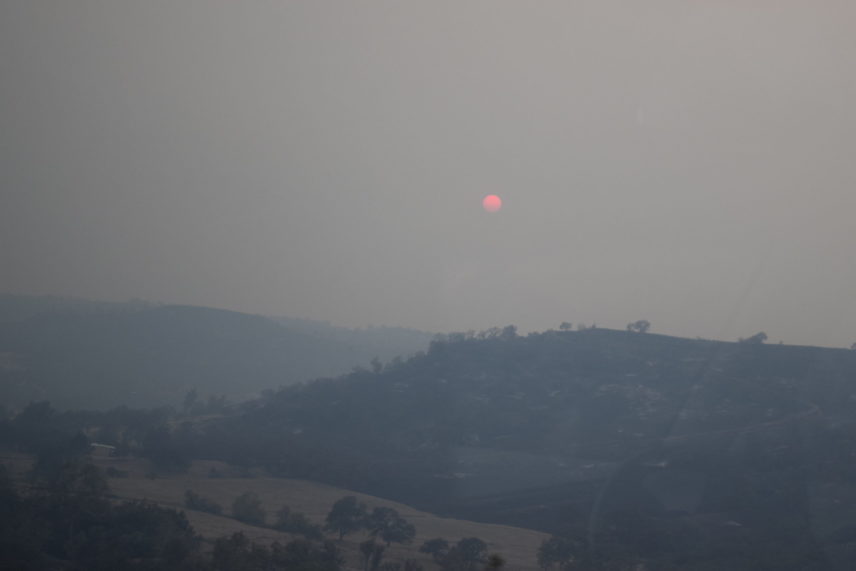 Photograph of the hazy air on the morning of November 11, 2018, as anthropologists were traveling to Paradise, California, to start recovery efforts for the day.

As the fire advanced across the landscape, approximately 52,000 residents were evacuated. Many people spent long hours in their cars during the evacuation, escaping with few possessions and limited means of communication. The result was an extensive list of possible missing individuals from the fire-affected communities. The effort to search for these missing individuals fell largely on the Butte County Sheriff’s Department; however, they enlisted the help of state coroner and search and rescue teams, the California Office of Emergency Services, the National Guard, the California Department of Forestry and Fire Protection (CAL FIRE), and multiple local and regional fire departments to search for missing persons.

During recovery operations, anthropologists were deployed as a means of triage to quickly identify human remains from nonhuman remains or other construction debris, and thus identify areas for concentrated recovery efforts. For example, in some cases animal remains such as pets or other wildlife were found in the same area as cow bones from a kitchen refrigerator or deer antlers used as home decoration. It was important for recovery teams to quickly identify material as nonhuman remains and be able to move to the next area of interest. Once human remains were identified, anthropologists were embedded with coroner, sheriff, or search and rescue units to assist in the recovery. As forensic anthropologists, we are also trained to systematically process, recover, and document the remains and other relevant material to aid in an identification. This material could include surgical implants (a knee or hip replacement) or other personal items on the individual (documentation or jewelry). Each of these skills supports efficient recovery efforts as well as providing necessary documentation to assist in subsequent osteological analyses. Forensic anthropologists were also involved in overall planning and logistics to support recovery efforts, including helping to manage individual teams from the incident command center.

Working conditions at the scene of the fire were extremely hazardous. The air was full of smoke, which made it difficult to breathe and see. In some areas, small fires were still burning, and in many places the ground was hot to the touch. Efforts were made to ensure the safety of all volunteers but there were still dangers, especially in the days immediately after the fire. As we, and other recovery volunteers, sifted through building debris, we often encountered smoldering materials, becoming covered in ash and soot by the end of each day. As more agencies were mobilized to assist, protective equipment such as respirators, Tyvek suits, masks, and gloves became more readily available. As time passed, environmental hazards and other discomforts were minimized. The work, however, remained emotionally and physically exhausting. Some individuals assisting with recovery efforts lost their own homes in the fire. This interaction brought a deeper personal element to the work. Moreover, the level of loss to which we were witness was difficult to process, and it was important for everyone to check their own mental health and allow themselves the space and time to grieve and experience their own reactions to the work. Yet there were instances of hope. In some cases, people were found alive in homes that were not damaged. We could also help other rescue workers who lost their homes recover personal items.

The main recovery efforts continued through November 28, 2018, with three additional follow-up recoveries in early December. During this time, search and recovery efforts of all the agencies involved resulted in the recovery of 85 fire victims. Of these 85, anthropologists were instrumental in the recovery of 75 individuals. Once the remains were removed, they were transported to the Sacramento County Coroner’s Office where they were examined and identified through various means. These methods included skeletal analysis (biological profile, sorting of commingled remains, etc.), radiographic comparison (postmortem radiographs with antemortem dental records), and rapid DNA. These efforts were conducted by pathologists, odontologists, DNA analysts, anthropologists, and other staff. Of note, the Camp Fire is the first mass fatality incident to use rapid DNA as the primary means for identification, ultimately providing 58 of 84 identifications made to date (see Gin et al. 2020 for a full description of this process).

The devastating effects of this fire are inextricably tied to both climate change and behavior. The western United States has experienced warmer temperatures and prolonged dry seasons with interspersed winter rain that serves to increase the fuel load through plant growth. These climatic variables coupled with increased development in once rural areas set the stage for wildfires to have a devastating impact, with catastrophic results in California. In fact, of the 20 most destructive wildfires in the state on record, 15 have occurred in the last 20 years. The last 20 years have also been the hottest and driest summers on record in California. 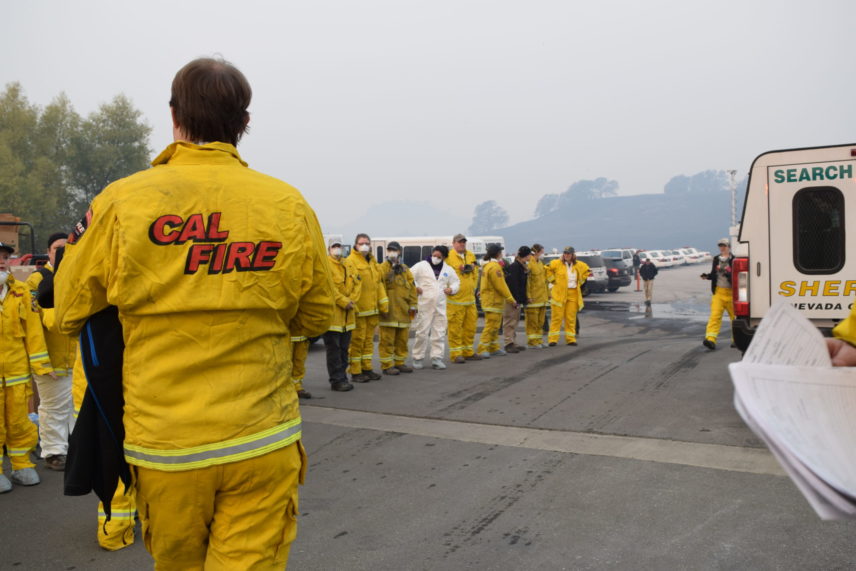 Anthropologists line up in a parking lot to get their assignments for the day.

Based on lessons learned from the logistical challenges associated with recoveries from these fires, we and other anthropologists are also helping to develop legislation to shape future responses to similar mass disasters, including writing guidelines for wildfire scene recovery, mass fatality management for wildfire-related fatalities, and laboratory identification procedures.

As climate change continues to impact cultures and environments, anthropology as a holistic discipline, and the skills and knowledge of anthropologists, will become increasingly important. For example, anthropologists can study the prehistory and history of climate and fire management through archaeological and paleoenvironmental work. They can also explore the global impacts of climate change on human migration and conflict. Through our combined efforts, anthropologists are in an excellent position to assist in the immediate mitigation of challenges as well as speak to past climate change, biological impacts, and the cultural consequences of this devastating global crisis.

Forensic anthropologists are increasingly being called on for their skills to assist in mass fatality incidents. With escalating devastation related to climate change and human behavior, demand will only continue to grow. Large wildfires like those seen in California and in Australia over the last several years, are only one component of these disasters. There are also likely to be extreme weather events, droughts, floods, and landslides related to climate change. While forensic anthropologists are prepared to offer their skills in these trying times, the hope is that we will not have to.

Marin A. Pilloud is an assistant professor of anthropology at the University of Nevada, Reno. She is a board-certified forensic anthropologist and regularly consults on forensic casework and recoveries. She is also a registered professional archaeologist and has active bioarchaeological research programs in Neolithic Anatolia and prehistoric California.

Eric J. Bartelink is a professor of anthropology at California State University, Chico, and co-director of the Human Identification Laboratory. He is a board-certified forensic anthropologist and regularly consults on forensic casework and scene recovery throughout California. His bioarchaeological research includes the study of diet, disease, and stress in prehistoric California.

Ashley Kendell is an assistant professor of anthropology at California State University, Chico, and the coordinator for the department’s certificate in forensic science. Prior to beginning her position at CSU, Chico she worked as a medicolegal death investigator in Lansing, Michigan, for four years and as a visiting professor and forensic anthropologist for the state of Montana.

Colleen Milligan is an associate professor of anthropology at California State University, Chico, and co-director of the Human Identification Laboratory. She is a board-certified forensic anthropologist and a certified instructor for POST (Peace Officer Standards and Training) in California. Her bioarchaeological research includes the study of disease in historic cemeteries.