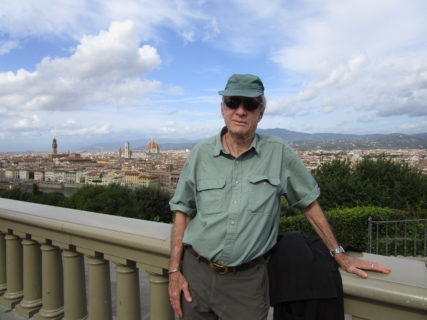 Image description: A man leans against a railing with one hand resting on it. Behind him, greenery and building stretch out into the distance with a cloudy blue sky above the horizon. He wears a sage green shirt and hat with darker green pants and a pair of sunglasses.
Caption: Frederick K. Errington

Frederick K. Errington of Amherst, Massachusetts, died suddenly of a heart attack on January 9, 2021. He was 80 years old. He leaves behind a distinguished legacy as an anthropologist and teacher. He was also a naturalist, car fanatic, and handyman with tools. He will be remembered for his kindness, generosity and wit by friends, students, and colleagues all over the world.

Errington was born and raised in Ames, Iowa, where his father, the renowned ecologist Paul L. Errington, was professor of wildlife biology at Iowa State University. His mother, Carolyn Errington, was a redoubtable figure who held a law degree, played piano, taught writing at Iowa State and was an assiduous editor of both her husband’s and her son’s writings.

Errington’s research had an extraordinary ethnographic range, including work in Montana and South Dakota as well as in Indonesia, Australia, Fiji, and Papua New Guinea. He authored two books before he met the love of his life, fellow anthropologist Deborah Gewertz of Amherst College. These were Karavar: Masks and Power in a Melanesian Ritual (1974) and Manners and Meaning in West Sumatra: The Social Context of Consciousness (1984). He also published two important articles on auctions and rodeos in rural Montana. But for the most part, once they married in 1983, they wrote and lived as an inseparable couple. Over the course of nearly four decades, the two of them explored issues of ecology, commodity agriculture and food consumption, social class, gender, tourism, and art.

Together, they poured forth a remarkable succession of books, articles, conference papers, and lectures. Often writing side by side at one keyboard, they published dozens of scholarly papers in refereed journals as well as seven highly regarded books: Cultural Alternatives and a Feminist Anthropology (1989), Twisted Histories, Altered Contexts (1991, 1994), Articulating Change in the “Last Unknown” (1995), Emerging Class in Papua New Guinea (1999), Yali’s Question (2004), Cheap Meat (2010), and The Noodle Narratives (2013). They made their last research trip to Oceania in 2019.

In recent years, Errington and Gewertz engaged closely with the land of his youth, the South Dakota prairie, where they dove deeply into issues of political ecology, endangered species, and rural values. As friends gathered (remotely) this past week to remember and honor Errington, they shared countless stories revealing his gift for listening and caring, for making others feel “seen.” He was also a true feminist, a man of grace and substance who respected and valued women.

Errington is survived by his wife, Deborah Gewertz, and by his older brother, Peter Errington of Washington, DC. His stepdaughter, Alexis Gewertz Shepard, died tragically in an accident in 1998. Final arrangements are being handled by Douglass Funeral Service of Amherst, Massachusetts.