Gender in the New NFT Economy

I am not tech-savvy. I’m that person who calls her partner, luckily an IT professional, to help her with minimal tasks such as building pivot tables in Excel or deleting extra pages in Word. So, how did I find myself in the middle of the new Non-Fungible Token (NFT) art market? The short answer is I bought an NFT in the form of a jpeg ape for $200 dollars in April 2021 and at the time of writing that ape is valued at over $150,000.

After graduating with a PhD in May 2020, I found myself underemployed, in that grey area all too common in academia: not quite adjunct, not quite teaching assistant. Ironically, it was during my many financial headaches and a damaged ego that I decided to buy an NFT after hearing about the Bored Ape Yacht Club (BAYC) project from a friend. At that time, I didn’t understand words such as “blockchain,” “gas,” or “metamask,” but since buying my ape I have dived in, fascinated by this world of early technology adopters.

Not only was my path to NFTs unusual but I soon learned that being a woman in this space was equally unusual. After joining the new market through Twitter and launching a project of my own, I noticed that far from being a nongendered marketspace, many influencers, who almost all identify as men, wish to support woman-led projects but do so in ways that continue forms of gendered, capitalist market dynamics

Wait…What is an NFT?

From skits on Saturday Night Live, articles in the New Yorker, and big auctions at Sotheby’s and Christies, most of us have, by now, at least heard of the acronym NFT. To put it simply a Non-Fungible Token or NFT is a unique asset that lives on a blockchain, which is essentially a dispersed ledger in which each page refers to the page before it.

A man and a woman are sitting at a table looking at an iPad with an illustrated ape pictured on it. The woman listens as the appraiser explains her object, the image of the ape.
Credit: Lauren Crossland-Marr 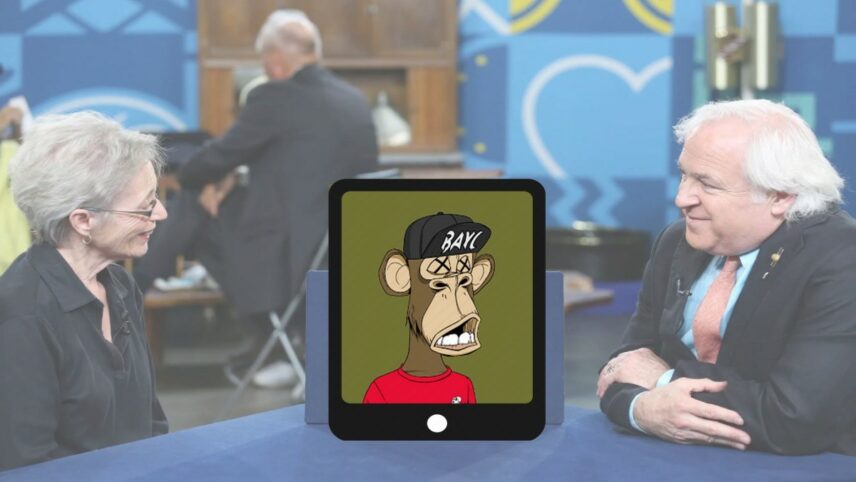 Antiques Roadshow of the future? Pictured is one of the author’s BAYC NFTs.

You probably know that currency of any kind is fungible. This means that one dollar is equated to another. You can use any dollar to buy a pack of gum, because they are all valued the same and are exchangeable. In contrast, an NFT is non-fungible or not easily exchanged and art is the most common use for NFTs. Let’s use Vincent van Gogh’s art as an example. We can all agree that Van Gogh’s Starry Night is not valued the same as his self-portrait—they are considered two different non-fungible assets. This is also true of paintings by the same artist of the same subject. If Van Gogh had more than one self-portrait you could not exchange one for the other. This is the same philosophy behind an NFT. Using the blockchain technology means that if I own an NFT, then I own it like a painting. Sure, you can take a picture of it—or maybe download a copy—but you don’t own the rights to it. Your reproduction has no value, but my NFT does. That value is verifiable per the contract associated with my NFT.

Avatar projects like the one I aped into, BAYC, are all the rage in the NFT space. These avatar projects usually have a limit of 8,000 to 10,000 unique avatars with programmatically randomized traits. Since BAYC dropped in late April 2021, there have been numerous NFT avatar drops, some tongue and cheek like pixelated kamasutra, kneecaps, and pickles, and others by serious artists like Bulls on the Block and Wicked Craniums. Typically, these avatars are priced at .08ETH (about $250) and often sell out in under an hour.

Although randomization creates interesting art, it can also create problematic combinations. In late June 2021, when an avatar project called Misfit University was released, those who bought the NFT avatars discovered that there were several avatars of women that had their mouths duct taped. The worst offenders also had black eyes or were crying. Such overt misogynistic imagery is common even in this space that prides itself on being accessible to everyone.

And the list continues. In March 2021, the largest sale of an NFT ever—Beeple’s “Everyday”—came under fire after Ben Davis at Artnet News found racist, homophobic, and misogynistic imagery in the mosaic of 5,000 images.

Like forms of capitalist economy before it, the NFT market is not only about what is good art? but, perhaps more importantly, who is a good, authentic artist? When artists in this space answer the question, How do you sell your art? the answer is always about making an honest connection with people. One artist wrote, “I’ve learned it comes from people that connect with you and then if the connection is genuine, they speak of your work when you’re not even around.” I argue that this “genuineness” or authenticity precludes certain (female) bodies because female artists and collectors risk their physical and mental well-being by interacting in these “authentic” ways. For example, I’ve read several tweets in which female artists are asked by a male collector to join video chats. It is when the women join the video calls that they find out that men want sexual favors, not to buy their art.

At the opposite end of this spectrum of problematic portrayals, offensive language, and sexual advances, are two projects led by female artists: World of Women and The Fame Ladies Squad. The artwork portrays women as attractive, blowing bubblegum, or with fashionable hairstyles. What these projects show is that women in this space are considered authentic only in their status as women. This carries through to all facets of NFT avatar projects and applies differently to their male-run counterparts. Both the World of Women and Fame Ladies Squad give a portion of their earnings to nonprofits that work with victims of domestic abuse and to women’s empowerment initiatives.

These two extremes symbolize women’s own position within this emerging market as one defined by their gender. This new art market continues gendered ideologies of women as either sexual objects or overtly femininized participants. And this is not just philosophical: being a woman has real monetary value in the space. In June 2021, a project called Punks Comic was rumored to have created a fake Twitter profile of a woman for promotion.

To grapple with this dichotomy further, let’s turn to a hot, sunny day in July 2021.

Authentic self in public

Discord is the preferred method of communication for NFT projects. The app is like the chatrooms of the past. Each project sets up a server that has channels such as news, welcome, announcements, and support. In addition to these informative channels, projects are adding community rooms where owners can connect on elements beyond NFTs. The BAYC Discord has a channel called “sports-bar” where people can talk about basketball and connect with others in real time.

Discord has also been used to create meetups both online and IRL (in real life). Before meetups, people will post pictures of themselves dying their hair to look more like their avatar or displaying a new tattoo showing their allegiance to their NFT community. When online meetups happen, they are frequently held in audio Discord channels, usually around a theme.

In July 2021, BAYC hosted the “the Death Nut Challenge”—the challenge to eat a series of five peanuts that get progressively hotter. The hottest one clocks in at 13 million Scoville units. For those of you who don’t know these units, just know this is 6x hotter than the hottest pepper in existence. One participant commented that he hoped the heat didn’t travel to his penis because it was his anniversary with his wife the next day and he wanted to make sure his penis worked. This form of social relationship building is tied to ideas about a man’s experience, especially when it comes to male sexuality. Not only does this create forms of masculine bonding but also serves to exclude women. This is not only done through the topics of conversation but also through the format: we know for a fact that women are less likely to speak up in a male-dominated spaces (see Lee and Mccabe 2021; Tannen 2007; Heilman 2001; Holmes 1992).

The cultivation of an “authentic self” is key to selling and participating in the NFT market. Perhaps, ironically, there is strategy in creating an online authentic self, so much so that one of the most important players in the NFT space, Gary Vaynerchuk, better known as Gary Vee, gives tips on how to be authentic online from “Don’t worry about oversharing” to “Don’t overthink.” To any women reading this, there is a lot of risk in oversharing online. Indeed, the very basis of an “authentic self” is modeled on the ability to overshare, a privilege granted to men. Authenticity for women is found in their identification as women which keeps them from cultivating an “authentic” self.

No one knows where the NFT market is going, but one thing is clear, at this stage gendered forms of marketplace interaction reign supreme.

Lauren Crossland-Marr, PhD is an anthropologist and postdoctoral researcher at Dalhousie University.