Diver fishermen often play a role in removing errant fishing nets from the ocean, but rarely find a place in conservation stories.

With salt-crusted eyebrows and the circle indent of a snorkel mask still pressed into his skin, Delvis sat in the shade of his family’s patio. “There’s a huge net on the crags of La Granja, it goes across three or four rock piles.” He hadn’t speared very many fish that day, but in the near shore fishing grounds Delvis frequented, he had come across his competition. Diver fishermen along the northern coast of the Dominican Republic often encountered abandoned fishing nets tangled in the reef and rocks, where net fishers cut loose pieces of their gear. With the hope of some easy money, Delvis reported the net to the local conservationist, who had a history of paying fishermen for their help removing ghost nets.

Ghost nets occupy a position of great infamy in ecological narratives, where ocean advocates often cite the magnitude of lost or abandoned fishing nets in the world’s seas, with nets cited as making up 10 percent of global plastic pollutions. Other researchers have estimated that 640,000 tons of ghost gear enter the water each year, “haunting our seas” as they ensnare and kill marine life.

A fishing net is tangled in a reef at the seafloor. The reef is green and the net has collected algae on it, making it appear almost as if it is part of the reef.
Credit: Kyrstin Mallon Andrews 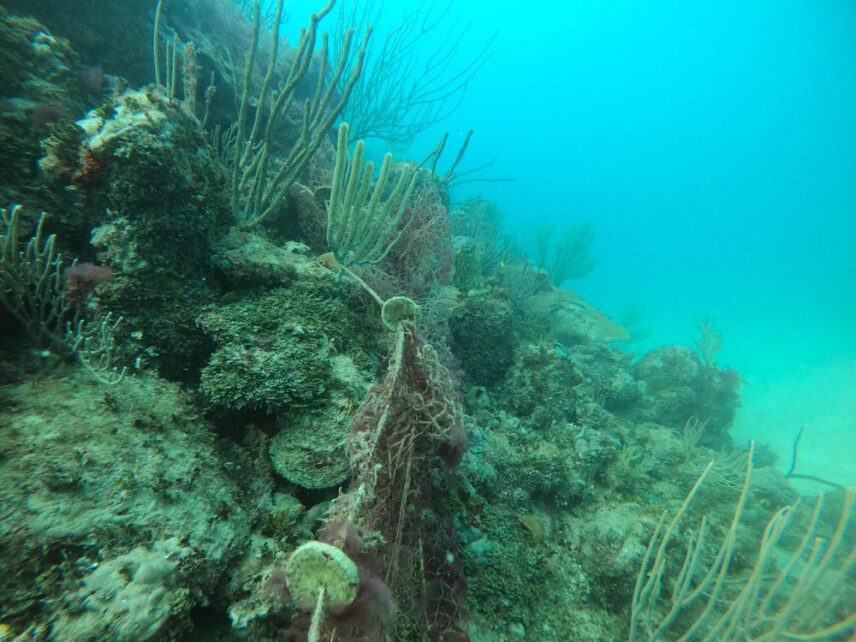 Delvis’ ghost net stretches across a section of reef, collecting algae in its meshing over time.
A thin brown, fishing net appears to float in the ocean. There is some light debris caught in parts of the net. The entire net is not visible in the in the picture, as it is a close-up photo where the net appears on the right and the rest of the picture is composed of a light blue underwater background (the top a lighter shade of blue than the bottom).
Credit: Kyrstin Mallon Andrews 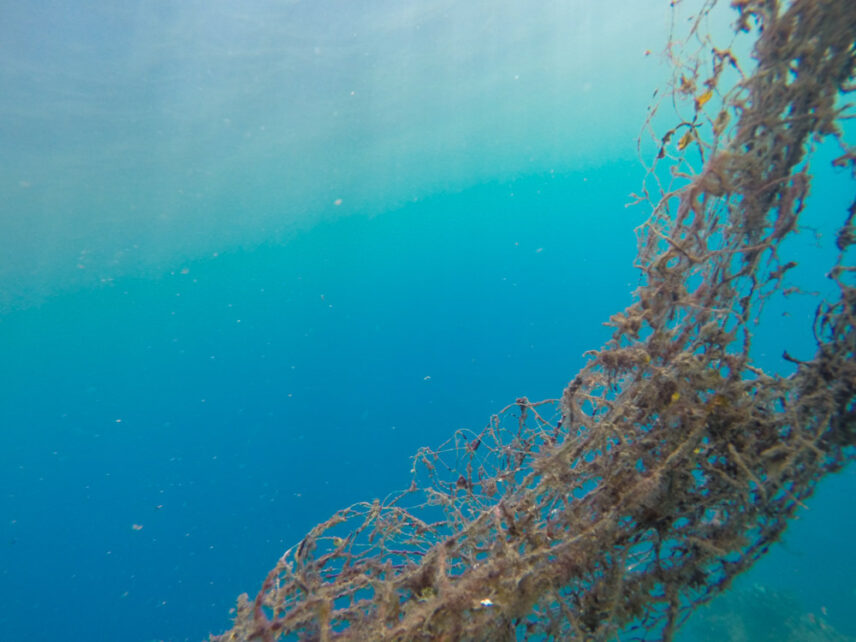 A net the author removed from the seafloor floats in the water column for a moment before she drags it back to the fishing boat.

Ghost nets have become a touchstone for conversations about ocean health and plastic pollution, a language leveraged universally against fishing as an environmental harm. Optics surrounding ghost nets often feature the infamous floating islands of abandoned fishing gear that haunt the Pacific.

While they may have similar effects, the ghost nets my interlocutors encounter are not floating islands, but traces stuck to the seafloor. Diver fishermen regularly unwind netting from the reef, since it interferes with their fishing practice, but diver fishermen rarely feature in narratives of ocean conservation or net removal. Are they also ghosts, of sorts? Ghosts are traces, most often identified as the disembodied souls of humans or hauntings of past acts. But solid, living bodies are also deeply entangled with the ghosts at hand. The images here center the bodies involved in ghost networking, ghost net busting, if you will.

Picture taken from the ground of a fisherman displaying his catch. Several fish are displayed in along green net, which sits on the ground and appears to be made of plastic or some other synthetic material. Small dark spheres (weights) attached to rope appear to form part of the net. The fisherman—a middle-aged man with a mustache who wears blue jeans, a light blue collared shirt, and a blue baseball hat—holds the base of the net. He appears in the background of the image. The man stands on a small pedestrian bridge, which has cement rails that are painted yellow (the paint is fading in places). The ocean appears to the man’s left and there is a motorcycle and vegetation visible at the start of the walkway, behind where the man stands.
Credit: Kyrstin Mallon Andrews 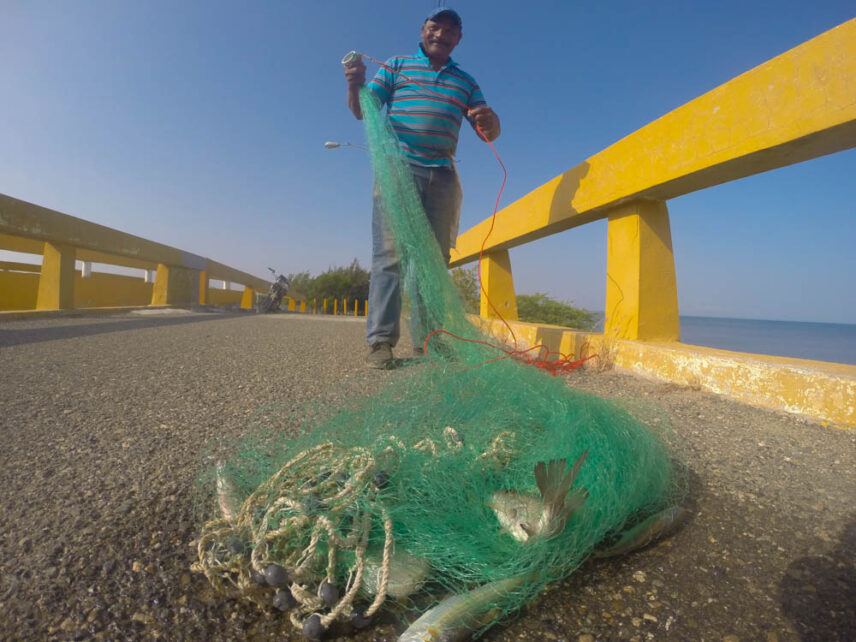 A cast net fisherman displays his catch after hauling it up from the bridge over the wharf.

Fishing nets are expensive pieces of equipment for rural Dominicans, and they are host to fragile political ecologies and local economic hierarchies. Once, when the Council of Fish and Aquaculture seized nets of an illegal mesh size, the community reacted by blocking the road to the beach with burning tires, breaking into the local Council office, and leaving broken parts of the agency’s computers in the street. The nets were promptly returned. Given their value for fishers here, these nets are not readily cut loose. Often ghost nets are the result of the physical limitations of the fisherman using them. (Fishermen are rarely able to retrieve mesh stuck on the reef or in rock crags, much to the chagrin of the fishmonger who owns the equipment.)

The image centers on the hands of a man who appears to be tying a knot in the meshing of a green, nylon fishing net. The man is sitting and only his hands and the lower part of his body are visible in the picture, as the photo was taken from above. He is wearing a gray shirt and dark blue jeans. The section of the net he works on is lined with a thin braided rope that has small dark spheres (weights) every five inches or so. There is a larger section of the net connected to the part the man is working on that sits on the ground. He appears to be making the repairs
outside, as the ground is light brown.
Credit: Kyrstin Mallon Andrews 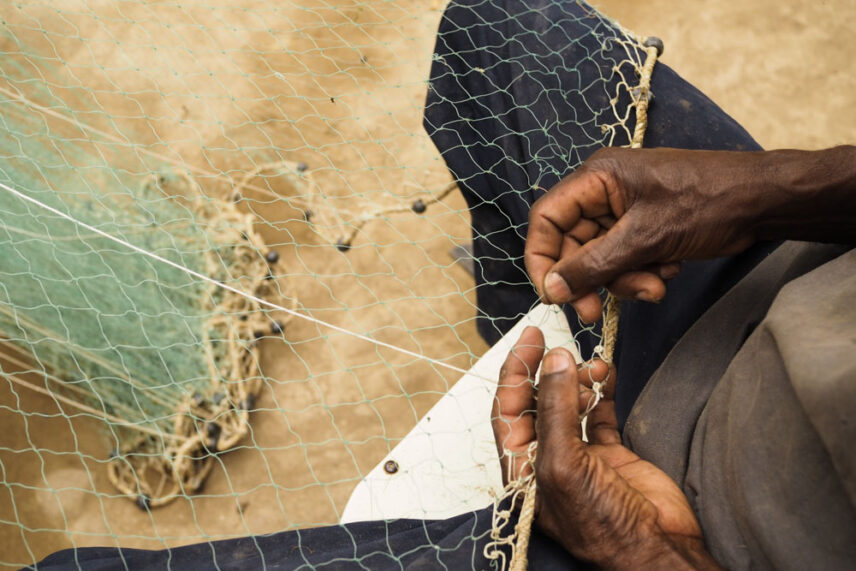 A man repairs the torn meshing of his cast net, tying careful knots in the nylon.

The ghost net Delvis found stayed on the seafloor for two months after he reported it. The local conservationist—equipped with the gear from his dive center, expansive political connections, and funding from multiple conservation NGOs—had promised to include Delvis in the profits of ocean conservation labor. A film crew from a conservation-centered media company would provide a convenient dramatization of his conservation work, as well as the funds for the operation. By the time the film crew arrived, Delvis had lost the bearings he used to locate the net. He and the dive shop owner motored out to the area using scuba tanks to scour the seafloor, but even with the expensive gear, they couldn’t locate the net. Worried about losing this window of opportunity, the dive shop owner posted on Facebook asking fishers for help.

The next day Delvis pulled on his spearfishing gear, wading into the sea from the shore to follow his body through the motions of fishing the region. He found the net, marked it with a buoy, and brought the crew back to the spot. The film crew dramatized the ghost net’s removal, filming the dive shop owner and associates as they carefully disentangled the mesh from the reef, freeing crabs and fish along the way. Delvis never appeared in the frames of their cameras.

A male diver in scuba equipment holds a large balled-up net in his left hand and looks up to the surface. The net is brownish green and covered in algae. The diver is wearing a blue t-shirt and the word “Florida,” along with a Blue Cross and Blue Shield Association logo, is visible on the right. He is also wearing white gloves that look to be made of cotton or wool. A green reef is visible behind the man and some small bubbles appear at the top of the image.
Credit: Kyrstin Mallon Andrews 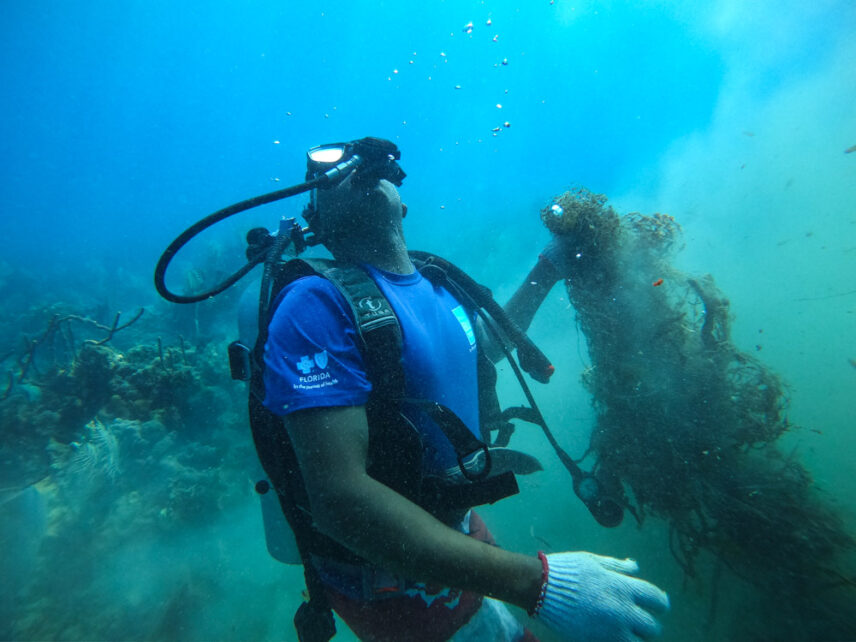 An associate of the dive center looks to the surface, waiting for a diver to bring a rope they will use to pull a ghost net up from the seafloor.
Two divers in scuba equipment are on opposite sides of a sea rod coral structure—which is light blue and has a tree-like shape with various branches—and both are using their hands to disentangle a brown fishing net from the structure. The diver in the foreground is wearing a bluet-shirt and white gloves (the photograph is taken from behind him) and the second scuba diver is wearing a black wet suit.
Credit: Kyrstin Mallon Andrews 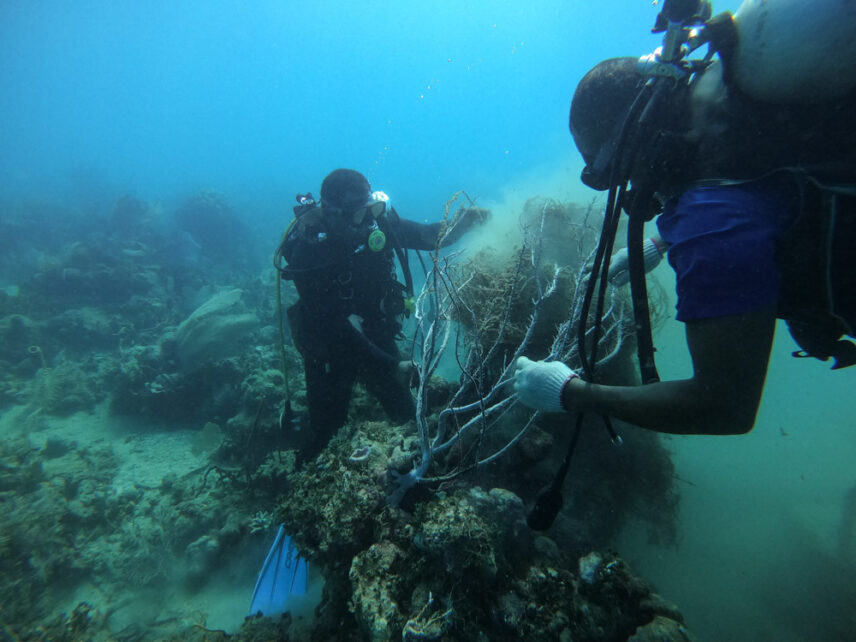 The dive center owner and his colleague try to disentangle a net from a sea rod coral structure without damaging it.
Four men are seated on a boat at sea on a sunny day. Three of the men are sitting along the perimeter of the front part of the boat (and are shirtless and wearing swim gear) and one is more toward the center (wearing a royal blue long-sleeved shirt, a matching baseball cap, and sunglasses). The boat is white and toward the front of it is a large pile of brown fishing nets. There is a bucket in the foreground and some ropes are visible on the boat floor and on the bench where they sit.
Credit: Kyrstin Mallon Andrews 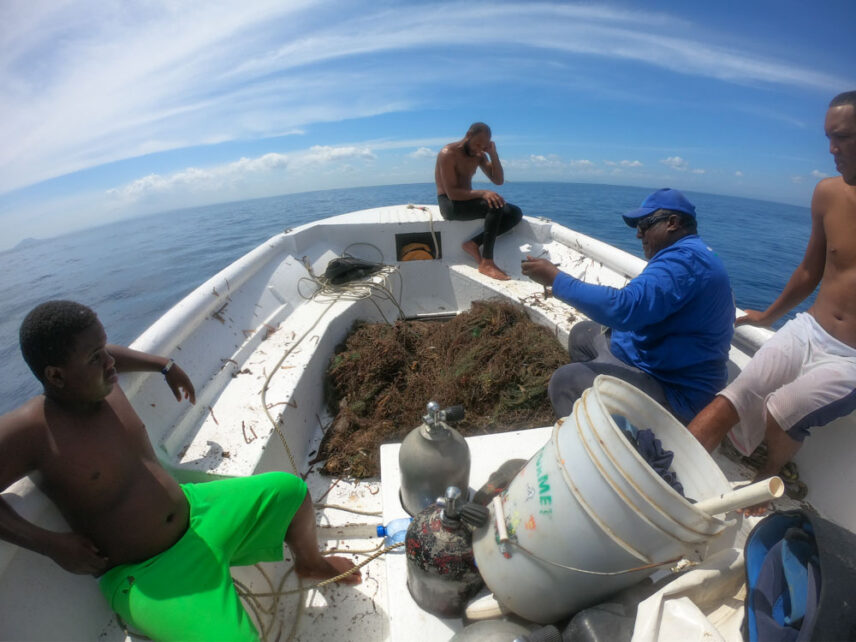 The successfully removed ghost net sits onboard a dive center boat as it is transported back to shore, where it will be delivered to the Ministry of Environment for analysis.
A diver in swim trunks with flippers on and a snorkel is underwater and appears to be moving up toward the surface of the ocean. Below him, on the seafloor, a large brown fishing net is draped over and tangled in a rock on the seafloor.
Credit: Kyrstin Mallon Andrews 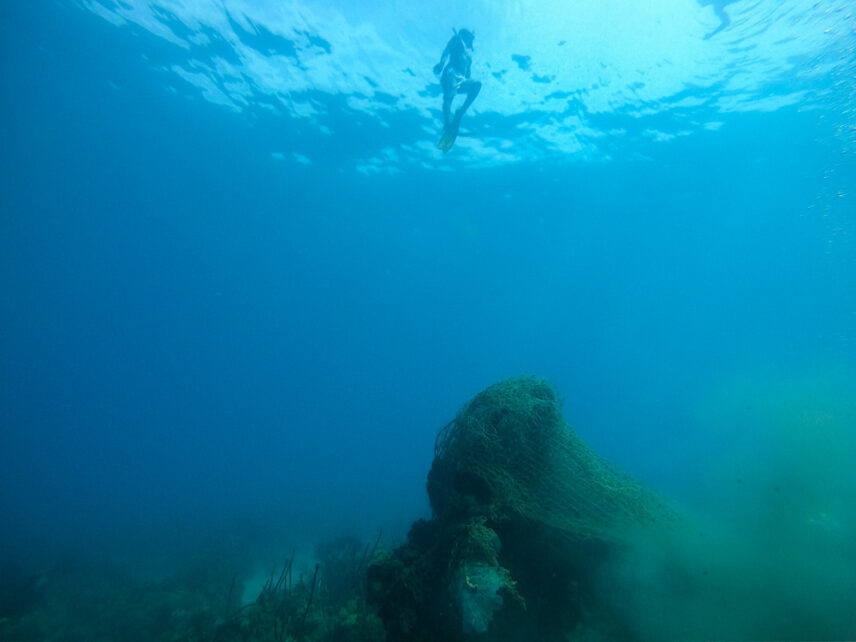 The diver fisherman surfaces above the ghost net he located, helping to disentangle the mesh on a breath hold while others work on the seafloor with scuba gear.

Kyrstin Mallon Andrews is a visiting assistant professor of anthropology at Miami University of Ohio. Her research explores the relationship between human and ocean health in fishing communities of the Dominican Republic. Her recent publications (written and photographic) have appeared in Medical Anthropology Quarterly, Writing with Light, and Anthropology and Humanism.