“Giigidootamishin, Speak on My Behalf!”

How establishing new relationships with historic pipes and an Elders Council allowed a museum to cocurate exhibits about Treaty making with First Nations people.

On a cold day in November 2016, a group of seven carefully chosen historic pipes (opwaaganag in the Anishinaabe [Ojibwe] language) from the Manitoba Museum’s collection were attending a ceremony at Ginew School at Roseau River First Nation. They were in need of ceremony because they had been asked to take part in an exhibit about the role of First Nations peoples in Treaty making. In this exhibit, We Are All Treaty People, the pipes were being paired with seven medals representing Treaties Number 1 to 5 and Treaty Number 10 reached in Manitoba between the Crown and First Nations in the 1870s. The medals in the exhibit instantiate Canada’s promises to Anishinaabe, Ininíw (Cree), Anishininíw (Oji-Cree), Dakota, and Denesułine (Dene) peoples. Using the pipes to speak to First Nations Treaty making was the idea of the Elders Council of the Treaty Relations Commission of Manitoba. Including them deliberately emphasises the spiritual nature of the promises made. Each of the pipes in the exhibit was accompanied by a beaded pipe bag, symbolizing the political role of First Nations women.

Exhibiting pipes in a museum is, to say the least, controversial. The Manitoba Museum has been removing pipes from exhibit for at least 30 years because, for the Anishinaabe, Ininíw, and Dakota peoples on whose traditional territories the museum stands, pipes are revered as sacred objects, as ceremonially active other-than-human persons. When pipes are spoken of in the Anishinaabe language the same grammatical form is used as if one were addressing an old man. The pipes are wiikaanag, ritual brothers to the rattles and drums (zhiishigwanag and dewe’iganag). They take part in ceremony as ritual kin to the warriors (ogichidaag and ogichidaakweg), apprentices (oshkaabewisag and oshkaabewisikweg), and their Bawaaganag, their spirit helpers, the ancestors or legendary figures of the Anishinaabe (Aadizookaanag). Wiikaanag are categorical persons with the capacity to act in the world. 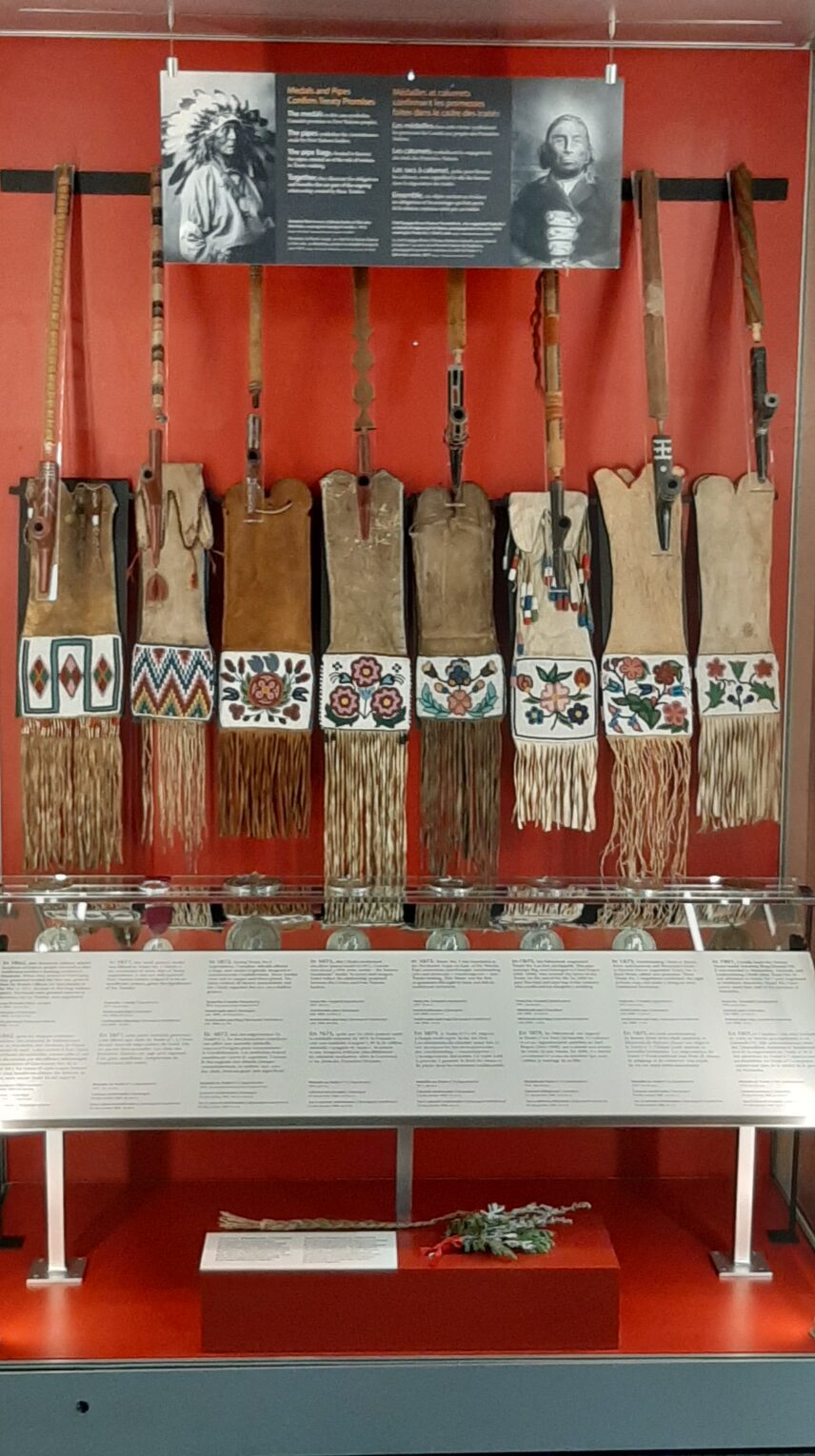 Introductory Treaty Acknowledgement exhibit, “You are on Treaty Land.”

In Treaty making, pipes, as wiikaanaag, initiate communication with spirit entities (Bawaaganag). The pipes make smoke (asemaa), also grammatically animate, which acts as messenger to the world of the Bawaaganag, who occupy what the American anthropologist A. Irving Hallowell called the “unified spatiotemporal frame” of the Anishinaabe. Roger, an Anishinaabe linguist, suggests that this idea is similar to the many-worlds quantum physics model of the universe described by physicist Hugh Everett and later used comparatively by anthropologist Julie Cruikshank, in which two parallel Anishinaabe worlds occupy the same geography: one, the everyday world of human existence, and the other, the home of Aadizookanaag who, in their role as Bawaaganag, act as intermediaries between humans and the overarching power of the universe, Gaa-dibenjiged, the owner of all. The boundary may be crossed in dreams or during a vision quest. Clouds or the morning mist are said to indicate the proximity of unseen spirits and this phenomenon is referred to by the Anishinaabe word manidoobaa (where the spirit exists). An anglicized version—Manitoba—is the name of our province. When the smoke from the pipe dissipates, it is said to be “going there”; it is understood to be crossing that intangible border between this world and the spirit world. The smoke carries with it a request to the Aadizookaanag, the ancestors, to observe and verify the promises being made. Roger says of the spirits, “They like smoke, and it’s also the closest way to contact them, [from] their world to ours. Smoke is apparently enjoyed by the spirit-beings.”

In Treaty Number 1 territory, the vast swathe of southern Manitoba which the Anishinaabe and Ininíw offered to share with newcomers 150 years ago, Treaties are formally called Zagaswe’idiwin agwi’idiwin—literally, a relationship made with the aid of a pipe. The words imply oversight of the spirit beings, the Aadizookaanagin whose presence one would never speak falsely. The other common Anishinaabe word for establishing a Treaty in Manitoba, Onaakonigewin, has the same meaning—that the pipes’ contribution is to ensure truth telling.

The suggestion that pipes could play a role in the museum telling the Treaty story was hotly debated by the Elders Council of the Treaty Relations Commission. The Elders Council was formed in 2006 and is jointly sponsored by the Treaty Relations Commission of Manitoba and the Manitoba Chiefs Organization. There is, of course, no traditional way to exhibit pipes in a museum. Years ago, it would have been unthinkable. But faced with the modern task of making the public case for First Nations agency in Treaty making, this solution seemed to offer possibilities. A lengthy Anishinaabe language discussion turned on the role the pipes could play in educating First Nations children about their own Treaty history. Elder Dr. Harry Bone carried the day, saying, “If we don’t put these pipes on display, our children will never see them.”

A seated woman dressed in white waves a feather at a group of onlookers inside of a room with photos and objects on the wall.
Credit: Manitoba Museum 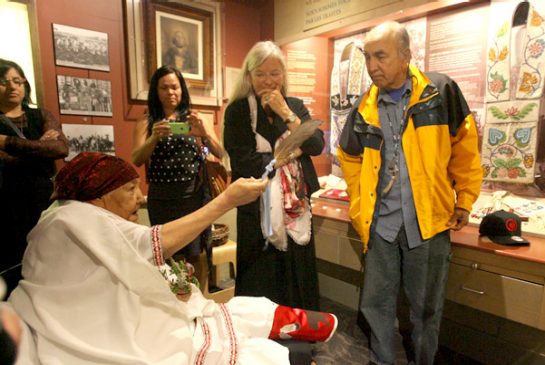 The pipes attending the ceremony at the school in Roseau were selected by the museum’s most senior elder, Dorine Roulette. Basing her decision at least partially on their shape and decoration, she identified pipes with the necessary combination of competence and public purpose, selecting those she judged to be in a certain state of grace (izhigaabawi) who would “appreciate their task” (oniibawitaan). Pipes like this, she explained, were created with the intention of having this public persona and would enjoy their diplomatic role in the museum. They clearly had izhigaabawi, “the appropriate social standing or status to perform a particular task,” and would have been given a role in Treaty negotiations in the past. She indicated that they were confident and had a certain attitude. They might even be said to be “kind of proud” (wawezhi’owag), and could be counted on “to stand up and speak on one’s behalf”(oniibawitaan) or more specifically that they were nindoonabiitaan,which means they are ready do whatever they are called upon to do. In ceremony, Elder Roulette explained, you say to such a pipe as you pass it on to another, “Giigidootamishin, Speak on my behalf!”

Having once decided to include pipes and their protocols in the exhibit, the Elders Council directed Maureen, as curator and representative of the museum, to Charles Nelson, a respected and thoughtful Midewiwin Leader from Roseau River. He agreed that this situation required an innovative approach and suggested using a combination of existing ceremonies to initiate a pipe, to honor it, and to offer it as a diplomatic gift. For this occasion, Elder Nelson chose Ginew School at Roseau River so that the children of the community could observe the history-making ceremony. Elder Nelson’s apprentices received the pipes and placed them on the bison hides in the middle of the gymnasium floor. As the children drifted into the gym, Elder Nelson spoke to them about the significance of the event. Songs were sung, prayers given, and then Elder Nelson suggested it was time to smoke the pipes. Most of these pipes had not been smoked for 125 years, but Elder Nelson offered them to local elders and to Treaty Commissioner James Wilson, choosing pipes with special meanings for certain individuals. The room was quiet while pipes circulated around the room, and all adults were invited to smoke or to place a hand on the side of the stem in acknowledgement of the honor of being part of the ceremony. In doing this, Elder Nelson was encouraging the pipes to initiate new relationships, many of which have been sustained ever since. Toward the end of the ceremony, Elder Nelson observed to the children who were sitting quietly nearby that the pipes, still assembled but now lying on a bison hide robe, would be behind glass for a year and that they would find this easier with more human connection. He touched each pipe thoughtfully and then looked at Maureen. Maureen knelt and touched the pipes and then an impromptu reception line formed and everyone in the room, from the Commissioner to the smallest child, knelt and touched the pipes in a gesture of community support and affection. This was the best possible initiation for the pipes, and we all felt that we had been a part of something magical.

Anishinaabe language speakers readily articulate the idea that objects have social force. Museum scholars may have hoped that the grammatical distinctions made by speakers would offer a handy key to “sacredness,” but this is not the case. Even drums are referred to by expert speakers as madwe’igan(an), an inanimate form, which means any thing to strike or beat upon and is used when a discrete euphemism is appropriate. Pipes too have an inanimate mode. When the bowl is separated from the pipe stem, the separate parts, the pipe bowl alone, onaagan(an), and the pipe stem, okij(iin),are grammatically inanimate. It is only when the pipes, opawaaganag in Anishinaabemowin (Ojibwe), ospwâkanak in Ininímowin (Cree), are ready to make smoke that the grammatical attribution changes, and the pipes step up as other-than-human persons and Wiikaanaag. This is why, in exhibits in museums, you will see that the pipes on display are carefully separated.

A robed man kneels on the floor, surrounded by children and museum officials looking at artifacts
Credit: Treaty Relations Commission of Manitoba 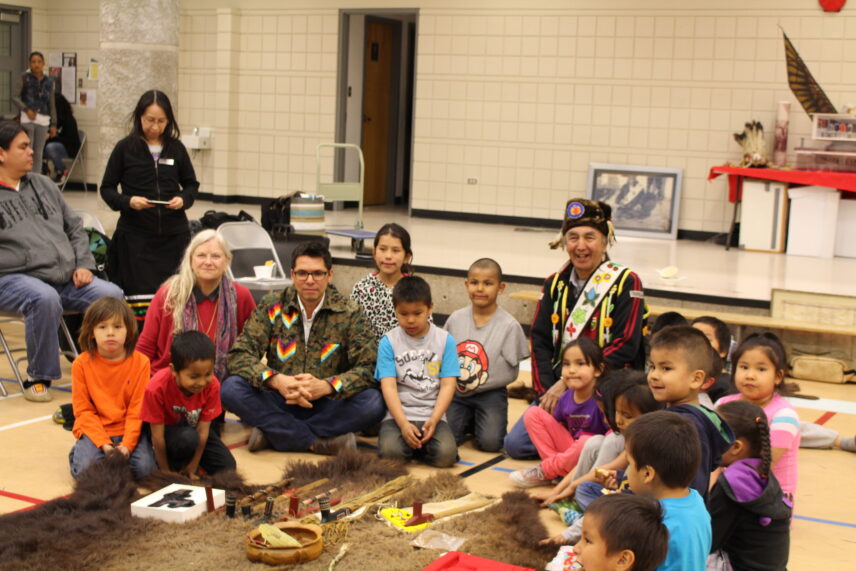 Treaty pipes, doing diplomatic work as political allies of Indigenous families, implicate the museum in what James Clifford termed a “contact zone.” The museum becomes an active participant in the ceremonial and relational obligations of the pipes, their families, and communities. The pipes reinforce demands for a renewed, respectful Treaty relationship by drawing attention to the fact of their preservation. The survival of objects is not an accident of history, as the historian Greg Dening wrote, “It is only the destruction of these relics which is accidental. Their preservation is cultural.… They gain meaning out of every social moment they survive.”

The pipes are exerting a disruptive force and have claimed primacy for First Nations protocols and meanings. In their capacity to form relationships, and in the multiplicity and variety of those relationships, pipes show their social force. They require the museum to surrender curatorial authority in favor of Indigenous practices and protocols. In welcoming decolonization, museums must accept the relational obligations which inhere in their Indigenous collections and act on the idea that these obligations are foundational. Decolonizing requires the restoration of historical relationships, the acknowledgment of contemporary relationships, and the inevitability of ceding museum authority to build future relationships. When the pipes are invited to stand up for First Nations people in an exhibit and agree to use their influence to convey the message that treaties were made in good faith, we are all obliged to honor them.

Elder Dorine Roulette passed away on March 18, 2022, at the age of 84. We are sad for her loss, grateful for so many years of expert guidance, and we know that her love and wisdom will inspire us in the future.

Maureen Matthews is the curator of cultural anthropology at the Manitoba Museum where she has been developing exhibits with Manitoba Elders and Indigenous community members. Matthews is currently completing a museum outreach project, Nametwaawin, with Roger Roulette including five bilingual Anishinanaabe and English school books for Upper Berens River communities.

Roger Roulette is an Anishinaabemowin speaker and member of the Sandy Bay First Nation. He is a linguist and translator and an Adjunct Professor at the University of Manitoba. He has worked with Maureen Matthews since 1992 translating, transcribing, and interpreting the recordings of Anishinaabe elders on the Upper Berens River.