Discovering a language of unity between pensioner and refugee

In fall 2017, I was in Athens during the economic collapse to interview Greek families on how they were confronting the financial challenges and enduring the imposed austerity measures. I set up a meeting with Irini, a volunteer Greek language teacher at the Migrant Center, to talk about how she was faring. However, our conversation quickly shifted from her personal circumstances, as a woman in her seventies living on a pension, to her work at the Center and the refugees and recent immigrants who were her students. Her experiences shed light on the often invisible yet invaluable contributions that local volunteers make in assisting refugees and asylum seekers caught in bureaucratic limbo. From Irini, I learned how her volunteer work at the Center extended well beyond the Greek lessons she provided, but served as a nuanced form of activism to counteract the inhuman circumstances manifested in her students’ precarity, as well as an act of resistance to the erosion of her own security brought about by the economic downturn. 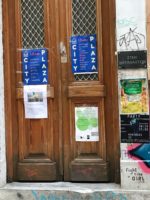 Image description: A two-panel brown door has four posters stuck on it. The wall next to the door includes more posters and a plaque.
Caption: Entrance to the Migrant Center in Athens Greece. Deborah R. Altamirano.

I have conducted ethnographic research in Greece for several decades working initially with women World War II resistance activists. By 2010, when most of my resistance interviewees had passed away, I remained in contact with their families. I was introduced to Irini through my resistance contacts and we arranged to meet one afternoon at the Migrant Center, located in Exarchia, a vibrant student area and long considered the anarchist hub of Athens. In 2015, when tens of thousands of refugees arrived in Greece many ended up in Exarchia, homeless and struggling to survive on the streets. Local activists responded quickly by creating squats in vacant buildings to provide shelter, food, and other services to those in need. Housed in an old two-story building on a pedestrian walkway, the Migrant Center is just a block from Exarchia Square and near several of the squats.

When I arrived at the Center, Irini was busy preparing her upcoming lesson. She lamented that she was struggling to survive on her pension, now reduced by 40 percent as the result of the austerity measures. Her economic precarity was ever-present in her day-to-day life. However, she chose to focus her energies—and our conversations—on her volunteer efforts at the Center and to bring attention to the persistent challenges her immigrant and refugee students confront.

It became clear during our interview that her work was one more step along her lifelong path of activism and volunteerism. Irini explained that when she began teaching biochemistry at the University of Athens in 1971, she and her students became fully involved in activism against the “Dictatorship of the Colonels” and to restoring democracy society. Then at the end of 1988, she came in contact with refugees when a large group of Kurds arrived in Greece. She immediately volunteered with the Greek Council on Refugees to provide assistance. She retired from teaching and took her pension shortly before the economic crisis hit. Irini insisted that it was not by chance that she continued to work with refugees. Although retired, she still loved teaching and working with young people. Very importantly, she felt a deep moral responsibility to reach out to those adrift and provide them safe harbor, as strangers once did for the Greek refugees fleeing in 1922.

At the time of our interview in fall 2017, there were approximately 50,000 refugees in Greece. International and local agencies, along with thousands of volunteers, provide care for the refugees who continue to arrive and for those who await their processing for relocation to other parts of Europe, family reunification, or for asylum that would allow them to remain in Greece. Irini bemoaned that, given the backlog and the complexities of the review process, it may take refugees several years to learn the outcome of their petitions. In the meantime, they wait in Greece.

As her students began to arrive, Irini invited me to sit in on the lesson. She offered a beginning Greek language class a couple times a week, free to any and all willing to learn. Most of her students were young men from Syria and Afghanistan. There were also two middle-aged Albanian women, one Syrian man in his fifties who was a very attentive student, and a few young Europeans from The Netherlands, Italy, and the United Kingdom. Part way through the lesson, another young man entered the classroom. Irini greeted him and told me that he was from Myanmar, one of a new population of refugees arriving in Greece. 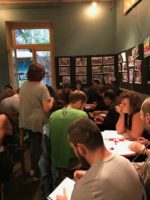 Image description: Many people sit at tables in a room with green walls and one visible window. Many books and notebooks are open on the tables, and the teacher is standing in the midst of everyone else.
Caption: Irini teaching a Greek lesson to eager students. Deborah R. Altamirano

During the break, I was able to chat with a couple of students who had more advanced knowledge of Greek or English. They conveyed that they felt very fortunate to have these lessons provided for them and a center where they felt welcomed and “at home.” For them, the Center was a place of freedom where they could meet others, socialize, and gather to celebrate events while they awaited the outcome of their petitions.

Irini found that most of her students hoped to go to Germany, but given that it can take years, she felt that it was important for them to have the skills and knowledge they needed in order to find their way while in Greece:

The most important thing isn’t that they learn Greek perfectly, because many will only stay for a short time. But it is critical that they be able to circulate and communicate, that they have their own school, a teacher, a hug when bad things happen. The Migrant Center is their place, their steki [hangout].

At the Migrant Center, Irini is able to step away from her own economic fragility to confront and counteract the forces that threaten the well-being of those whose lives are more precarious than her own. She strives to provide her students a sense of normalcy, connectedness, and community in a disconnected scape. At the Center, Irini participates in creating a transnational safe space that both refugee and pensioner co-inhabit as they struggle to maintain their agency and navigate the challenges of social, political, economic, and personal vulnerabilities. Through her Greek lessons, she empowers her students by providing them the ability to communicate and to connect with the people in their local environment. Irini is emphatic, “My work at the Center is not charity, it is solidarity.” Image description: A number of tents are set up outdoors, each with handmade signs attached to them. People sit in front of the tents holding a large sign declaring a hunger strike.
Caption: Syrian Refugees—Hunger strike, protesting the long wait for the processing of their asylum applications (Syntagma Square, Athens, November 17, 2017). The strike ended two weeks later with no discernable resolution. Deborah R. Altamirano

The dire conditions endured by the refugees, particularly those in the detention centers, persist. When I met Irini again in June 2019, she was taking time away from her work at the Migrant Center. The continued trauma experienced by her refugee students had taken a toll. But she missed her students and she planned to return soon to assist the new arrivals. The care that Irini and all the volunteers provide continues to be critical. Over 45,000 refugees arrived in Greece in 2019, and the Greek government expected over 100,000 more to arrive in 2020. What they didn’t expect was the arrival of a pandemic.

Greece shut down very quickly in response to the COVID-19 outbreak in Italy. Businesses shuttered, people stayed home, they social distanced and wore their masks. As a result, Greece managed to keep the rates of infection and death relatively low. However, those in the overcrowded refugee camps face even more daunting challenges to stay safe and healthy. Volunteers continue to care for the refugees, both in and outside the camps, and some organizations are providing on-line classes, including Greek language classes. As of July 2020, Irini reported that she has remained COVID-free but has not been able to return to the Migrant Center. In June, when she felt it was safe enough to travel, she escaped the congestion of Athens for an Aegean island where she felt “less vulnerable to the virus.” She hopes that, someday soon, she will be able to return to the Migrant Center, to her students and to her Greek lessons.

Deborah R. Altamirano is an associate professor of anthropology at the State University of New York at Plattsburgh. Her teaching and research interests include political and social movements, gender, transnationalism, democratic transitions, and immigrant, refugee, and exile communities in the Americas and the Mediterranean. She has conducted extensive ethnographic research in Greece.