Former students recall their experiences of an exceptional scholar, mentor, and friend.

Lucy is not solely a linguist anthropologist—he is a linguist, anthropologist, and psychologist who has contributed across these disciplines and to Maya studies and language. Lucy is a renowned scholar, internationally known for transforming the study of linguistic relativity. Exceptional among his qualities is his joint commitment to impeccable scholarship and others’ humanity. Here I include memories and experiences from Lucy’s students, who consider him both mentor and friend, and many of whom presented at a conference celebrating his career in October 2019.

Elise Berman (PhD 2012, the University of Chicago) remarks, “He was dedicated: my first semester on campus, he delayed his sabbatical so that I would get the courses I needed. And he was compassionate: when I was sick during my second year, he helped me take a leave of absence, and keep my momentum in the program.” Both Robin Shoaps (PhD 2004, University of California, Santa Barbara) and I (Catherine Rhodes, PhD 2016, University of Pennsylvania) share the remarkable experience of receiving Lucy’s mentorship and generosity of time and intellect even though we did not complete our doctoral work at his home institution. Lucy regularly adapted his research and teaching schedules for his students and gave us countless hours of his time and insights—both extremely precious resources.

Lucy brings the same approach to research that he brings to teaching and to life. His ability to deftly create relationships between ideas is reflected in his ability to create relationships between people. Laura Horton (PhD 2018, University of Chicago) refers to him as a “connector” who “worked to build a community of graduate students working on Mayan languages at [the University of] Chicago and connected me with close friends who became invaluable companions in the field and throughout my graduate program. He loves to recommend talks that he has seen or mentions my work when he encounters others who he thinks should know about it.”

A man with grey hair, glasses, and a mustache is smiling broadly. A city can be seen in the background, as well as the horizon with a bright blue sky.
Credit: Suzanne Gaskins 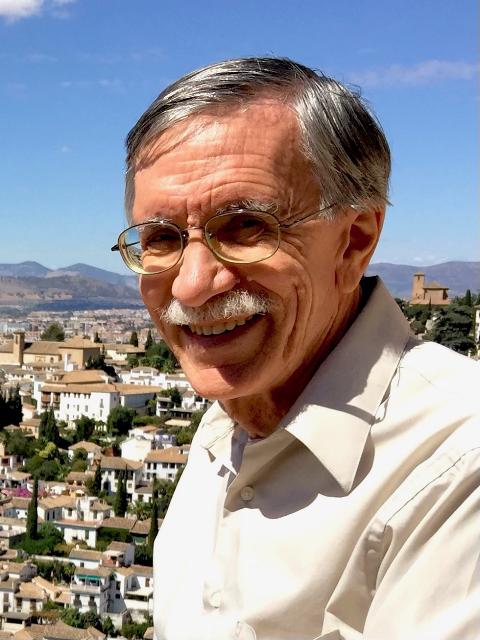 Contributors repeatedly emphasize Lucy’s human commitment, stressing that he is both mentor and friend, accounts that could not, would not, and should not attempt to disentangle the seamlessness with which John treats both their research and studies and them as humans with rich and full lives. As Shoaps eloquently writes,

[His] intellectual rigor and the demands he made on me as a student were matched by his care and recognition of me as a whole person with an inner life. He modeled a life in which having other goals and interests did not dilute or compete with academic seriousness of purpose. In the early- and mid-nineties any sympathy toward extracurricular humanness felt rare, particularly on the part of a renowned, male scholar, as did John’s lack of condescension toward women academics who chose to have families.

It is difficult to define Lucy’s way of being in the world as praxis, for that implies putting theory into practice. John lives theory and makes theory through living, dissolving the division between these. Sevda Numanbayraktaroglu (PhD 2010, University of Chicago) saw this when Lucy helped her as a new teacher:

The first time I was to teach as a stand-alone lecturer, I was anxious and turned to him for advice. He calmly reminded me that I belonged in the teacher’s chair, and even if I did not feel it inside at that moment, if I acted as if I did, all would fall into place in a few weeks. His advice was grounded in his scholarship in the self and his experience as a teacher. And it worked. I still share this advice with my own students.

This is also evident in Lucy’s commitment to Maya language study and teaching. Perry Wong (PhD candidate, University of Chicago) met Lucy as a high school student because he wanted to study Mesoamerican linguistics with him as a University of Chicago undergraduate; he then continued as a doctoral student. But Maya is not simply a tool for conducting research; speaking Maya enables Lucy and his students to make and inhabit worlds filled with meaningful, lifelong relationships. Christopher Bloechl (PhD candidate, University of Chicago) notes that learning Maya from John during the academic year was a “rare opportunity” and emphasizes how

John’s investment in his students extends well beyond the classroom. Over the years, he and Suzanne Gaskins have opened their home in Yucatán to their students for summer visits. This generosity has helped us improve our grasp of the language and develop our own research projects. John’s guidance and insights were instrumental in helping me establish a fieldsite and project in Yucatán. His social relationships in the local community have been illuminating for me. John has not only conducted groundbreaking research in Yucatán; for decades now, he has also nurtured meaningful relationships with local people.

Edber Dzidz Yam (MA 2020, El Centro de Investigaciones y Estudios Superiores en Antropología Social, Mexico City) says, “He showed me how I can look at my own language, rather than showing me how much he knew about it. He helped me think about my language in a different way, like a researcher.”

Smith and Gregory Thompson (PhD 2011, University of Chicago) write of Lucy’s thinking as “unusually expansive in both the range and systematicity of his theoretical concerns,” which they see reflected in his “signature” class, Language, Culture, and Thought:

In this class, John maps dimensions of linguistic variability in a comprehensive way (i.e. it considers the consequences of having human language, having a particular language, and using language in particular ways) and then considers them relative to an equally comprehensive array of psychological functions (e.g., specifically human forms of cognition, classification and memory, and higher-level forms of selfhood, among others). Although it is challenging to map out the consequences of this vision, we note that, in her introductory book on linguistic anthropology, Laura Ahearn uses John’s system to introduce students to the linguistic anthropological concern with language, culture, and thought.

Lucy mentors students across fields and disciplines, yet his students similarly describe his contributions: his work is field-defining and paradigm-changing, it is vast but deep, lifelong and life-wide; he is a mentor and a friend and a genuinely lovely human being.

When Lucy finished his PhD (he trained in three disciplines: linguistics, anthropology, and psychology), he published two volumes simultaneously: Language Diversity and Thought: A Reformulation of the Linguistic Relativity Hypothesis (1992) and Grammatical Categories and Cognition: A Case Study of the Linguistic Relativity Hypothesis (1992). The first is a groundbreaking project that reformulates linguistic relativity theory and outlines a method for studying linguistic relativity through the lens of having a particular language. The second is a case study of the application of this method that builds on over 15 years of ethnographic research in Yucatan, Mexico. Both have structured the conversations on linguistic relativity since.

Eve Danziger (PhD 1991, University of Pennsylvania) was Lucy’s first student. She studied with him at the University of Pennsylvania and then they were colleagues at the Max Planck Institute for Psycholinguistics. Danziger writes, “John’s unfailing loyalty to the very highest intellectual standards constitutes his first qualification as a scholar and as a graduate teacher. His intellectual rigour provided me with an example of achievements that were well worth emulating.” Horton’s was the last committee Lucy chaired, but despite retiring he mentors and teaches students. Lucy currently sits on five PhD committees, saw two graduate students to degree last year, and has already taught as emeritus faculty. Those of us who have had the immense privilege of learning from him in person will continue to share what we have learned with our students; Lucy will be educating curious humans for generations to come.

For many of Lucy’s students, myself included, we could not speak of the influence he has had on our lives without also speaking of Suzanne Gaskins. Suzanne has been with us too, teaching, mentoring, listening to, and modeling for us how to be scholars and humans. In work and in life, they are a team, one that has and continues to profoundly influence knowledge and lives around the globe. We are in awe of you both and of your scholarship, mentorship, and friendship. Jach dyoos bo’otike’ex, máaestros Juan yéetel Susy. Mina’an u xuul buka’aj a kansmajo’one’ex. Mu ya’ax túubul to’on bix a moodose’exi’.

Catherine R. Rhodes is assistant professor of anthropology at the University of New Mexico. She conducts research on the relationships between language practice, social differentiation, and personhood. On the Yucatan peninsula in Mexico, she examines the effects of institutionalizing the Maya language.