A murder case, the Supreme Court, and the one-way ratchet of settler colonial law converge in Oklahoma.

The Supreme Court heard oral arguments in the case Carpenter v. Murphy on November 27. At issue in the case is whether the roadside ditch in rural Oklahoma where Patrick Murphy murdered George Jacobs is part of the Muscogee Creek Reservation. If the murder took place on the Muscogee Creek Reservation, it would fall under federal jurisdiction. If it was not Indian land, then the state of Oklahoma would have jurisdiction. A tenth circuit court ruling found that the land fit the Supreme Court’s criteria to be considered a reservation. If the Supreme Court decides that the tenth circuit is right, then they would have to accept that half of Oklahoma—lands guaranteed to the Cherokee, Creek, Choctaw, Chickasaw, and Seminole Nations by treaty—are in fact Indian Country. If the Supreme Court decides that the tenth circuit is wrong, it would establish the contemptuous treatment of Indian nations as settled law.

According to the 1984 Supreme Court precedent Solem v. Bartlett, which was upheld unanimously in 2016 in an opinion written by Justice Thomas, only Congress has the authority to disestablish or change the boundaries of an Indian reservation. In 1832, the Creeks signed a treaty agreeing to cede their lands in Alabama and Georgia in exchange for lands to the west of the Mississippi in what is now Oklahoma. In 1866, they signed a treaty agreeing to the reduction in size of that reservation. Although it took steps to restrict the authority of the Creek government and break up communal land ownership through a process known as allotment, Congress never explicitly disestablished or altered the boundaries of the reservation. Neither was there sufficient historical evidence for the tenth circuit to rule that Congress even intended to disestablish the reservation. If Congress never disestablished the reservation, then the reservation exists according to the boundaries agreed to in 1866. The Court ruled that only Congress can decide: “Decisions about the borders of the Creek Reservation remain with Congress.”

In oral arguments, several justices appeared extremely uncomfortable with this outcome. Justice Stephen G. Breyer, for instance, was concerned that, in the eastern half of Oklahoma, “there are 1.8 million people living in this area. They have built their lives … on municipal regulations, property law, dog-related law, thousands of details” that might be subject to jurisdictional challenges. Considering these possible practical implications for non-Indian Oklahomans, Justice Bret Kavanaugh suggested looking beyond the statutory text. Conceding that “it’s not a single piece of text, I’ll grant you that, but it’s a series of things that, together,” indicate that the reservation is no longer a reservation, suggesting “we have a lot of cases that say historical practice helps inform the text.”

Paraphrasing this argument, we do not need to know precisely when the state of Oklahoma overran Creek territory and abolished Creek government; we only need to know that it happened. One problem with this argument is that the Muscogee Creek Government has neither been abolished nor relinquished its claim to this territory. As the tenth circuit ruling notes, “Congress never dissolved the Creek government; it has enjoyed continuous and uninterrupted existence.” The Muscogee Creek Nation has a legislature, executive, and courts, and provides services, including law enforcement. 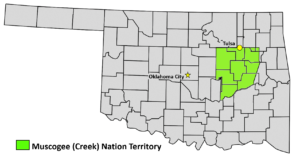 The broader problem with these arguments is that they depend on the logic of adverse possession. Adverse possession, or “squatters rights,” applies to situations in which one party gains title to a piece of property based on their history of occupation even if they do not hold the deed to it. In some cases, adverse possession allows poor people to claim title to land that they own and farm. In other cases, violence or wealth is used to take possession of land, and adverse possession is used to title it. In either case, adverse possession insists that the legal status must be made to conform to the situation on the ground rather than the other way around. If the federal government, the state of Oklahoma, and the people who live in the territory act as though the state and the municipality have jurisdiction, and if they act that way for long enough, then such action in and of itself constitutes a legal justification for the state’s jurisdiction. As legal scholar Garret Epps puts it, “contemptuous treatment of the tribe by the state and federal government after allotment makes a formal statute unnecessary.” In other words, might makes right.

As if to make this clear, Lisa Blatt, who is representing the state of Oklahoma, analogized this history of contemptuous treatment to the sacking of Rome to argue that the state does not have to establish a specific moment in which Congress disestablished the Muscogee Creek Reservation. “Rome did not fall in a day. We know it fell by 476 [CE], but it was sacked several times before that.” Her intent was to show that sometimes history does not provide orderly transitions, precise dates, and clear legal records. In doing so, however, she cast the state of Oklahoma and the United States Congress as lawless barbarian hordes who sacked Rome. This comparison is perhaps more apt than she would like to admit.

If the Supreme Court rules that the Muscogee Creek Reservation has been dissolved even in the absence of a formal statute by Congress, it would, in effect, provide an after-the-fact legal legitimacy to the sacking of the Muscogee Creek Nation. But it would do more than simply provide a fig leaf of cover for the contemptuous treatment of the Muscogee Creek Nation. It would fix that contempt as a permanent, legal standard and the baseline for future legal rulings. It would act, in effect, as the catch on a one-way ratchet. If the Court rules that disregard for tribal sovereignty is legal and makes it permanent, the catch slips into place, and the process begins again from a new status quo.

Chuck Sturtevant is a PhD candidate at the University of Aberdeen’s Centre for Citizenship, Civil Society and Rule of Law. He writes about political anthropology in the Amazonian lowlands of Bolivia. His recent published work includes “Habilito: Debt for Life.”

Correction
This article was initially published under the DOI 10.1111/AN.1062.