Local Flavor on the Streets of Oaxaca City

Street foods are a mainstay of the urban foodchain in Oaxaca City, a southern Mexican provincial capital of approximately 300,000 residents. Like food trucks in the United States, ubiquitous street food vendors are located near office buildings, schools, and parks, at sporting events, and in other public spaces where people congregate. This local dimension of food culture contrasts markedly with the emerging food tourism industry. The latter complements established forms of cultural tourism in and around the capital, including the July Guelaguetza folklore festival and tours of archaeological ruins and craft producing villages. Oaxaca City’s growing appeal to “foodies” coincides with two recent phenomena. The first is a thriving mezcal industry promoted in the International Mezcal Festival that the government initiated in 1998. The second is the explosion of boutique hotels and gourmet restaurants that, in recent decades, have attracted a more affluent clientele of Mexicans, foreign tourists, and celebrities. While these new culinary ventures open up important new avenues of anthropological inquiry, I focus here on ways that the consumption and sale of street foods are part of everyday strategies for “getting by” in an impoverished region.

This local food industry is a nexus of gender, socioeconomic stratification, cultural authenticity, and increasingly, globalization, underscoring contrasts in Oaxaca City’s socioeconomic fabric. At opposite ends of the food spectrum are celebrity chefs—mainly male—who are known for their “fusion” cuisine, and the indigenous cocineras tradicionales (traditional women cooks) who have carved out a culinary niche for themselves by preparing “traditional” pre-Hispanic comida (food) in restaurants, and by operating cooking schools for tourists. Meals at more exclusive restaurants, which per Travel and Leisure magazine are making Oaxaca into Mexico’s “next culinary hot spot,” often cost 500 pesos (approximately $US25) or more per person. This may seem a bargain to well off Mexicans or gourmands with US dollars or Euros to spend. However, these gourmet restaurants are out of reach for Oaxacans who survive on a minimum daily wage of 100 pesos (approximately 5 USD). For these Oaxacans, even consuming more affordable street foods can stretch an already tight budget. 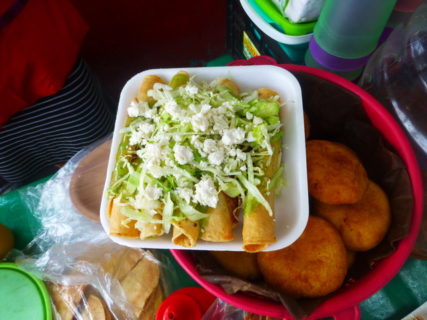 The sale and consumption of street foods are, regrettably, tied to issues of food insecurity. Despite an abundance of fresh produce and meats in local markets, out of Mexico’s 32 states, Oaxaca ranks first for elderly deaths and fourth for child deaths from malnutrition. This pattern is most acute among the two-thirds of households living below the poverty threshold. Poverty rates are highest in the countryside, where subsistence agriculturalists raise, consume, and engage in petty sales of vegetable and animal farm products. However, discussions of economic marginality in rural areas (Oaxaca state contains 3 of Mexico’s 10 most marginal communities) too often obscure that one-third of residents of the capital—the state’s largest settlement with the most highly developed infrastructure—are impoverished.

Dozens of food vendors operate within a 10-block radius on the fringes of Xochimilco, an upscale neighborhood in northeastern Oaxaca City that borders the Pan-American Highway. This mixed commercial and residential zone contains two hospitals and six schools, over a dozen small restaurants, bakeries, a small supermarket and convenience store, and several mom-and-pop stores that do a booming business during the day. Outside these establishments, a cross-section of Oaxaqueños purchase foods from ambulatory vendors selling packaged snacks, fresh breads, fruits and steamed corn cobs from pushcarts. Additionally, permanent and semi-permanent puestos (stands) sell a range of foods prepared in front of customers, including staples such as the memelas, tostadas, flautus, tacos and tamales that invoke for urbanites what Jeffrey Pilcher terms a “nostalgic cachet” of peasant cooking.

Residents of rural villages and towns that surround the capital commute into the city to work. Traffic snarls and high transportation costs preclude many from returning home for the afternoon comida that is typically the main meal of the day. Some workers of limited means may have lunch of purchased cold cuts, cheese, and bread at the corner market to make tortas. Others pay 2 pesos to reheat meals they bring from home in the store’s microwave. Still others consume street foods. Receptionist Tania’s experiences reflect the plight of poorer Oaxaqueños. She typically brings a bag lunch to work, but occasionally treats herself to tacos. She splurged on tacos that cost 12 pesos each, because she says they “taste better” than those sold at other nearby stands that charge 10 pesos per taco. Tania’s accountant co-worker María, who sometimes joins her for lunch, noted the significance of the additional 4-peso cost at this stand: for minimum wage earners, paying 24 rather than 20 pesos is the difference between spending one-fourth, rather than one-fifth, of one’s daily wages on lunch.

Food vending provides opportunities to generate income in a stagnant economy. The 82 percent of Oaxacans working in the informal sector, who may earn less than the guaranteed minimum wage, represent the highest percentage of casual workers in Mexico. Among these individuals are cityward migrants who become vendors. I became aware of the critical role of this work for lower income households during my initial fieldwork on schooling and employment in the 1990s. A number of cityward migrants spoke of family strategies to finance studies through the sale of street foods after relocating. This is the case with Luz, one of few vendors in the neighborhood who sells what she calls complete “home style meals.” Luz works seven days per week. She vends Monday to Friday from 9:00 a.m. to 4:00 p.m. and for half a day on Saturdays. She also cooks and shops on weekends and buys tortillas and other products as needed throughout the week. She sells up to 40 meals at 40 pesos each on weekdays when businesses are open. After expenses, Luz typically clears between 400 to 600 pesos (US$20 to US$30) on weekdays. She splits this with family members who are also involved in the purchase, preparation, transportation, and sale of the food. Despite her seemingly high daily earnings, like other vendors she recognizes the precarity of her work. Vendors receive neither benefits (such as vacation or sick days) nor a guaranteed salary, and have minimal if any sales on holidays or during inclement weather. 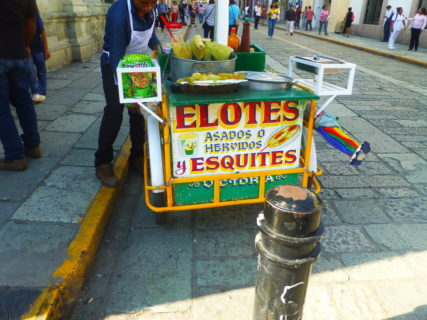 Another factor that can limit sales are concerns about cleanliness and health risks. Indeed, one popular local newspaper warned would-be consumers about the “mortal danger” streets foods pose. Although health department inspectors are assigned to verify that vendors’ permits (costing 600 pesos per month) are current and that foods sold at stalls are clean and served at the proper temperature, patrons unfortunately are often unaware which puesto owners’ permits are up to date.

Ultimately, as reported in discussions of street foods elsewhere in Mexico and cities across the globe, Oaxacans recognize the importance of these comestibles in the local economy even if they don’t personally consume them. The businesses provide employment at the same time that they offer locals—and tourists who’ve come to appreciate them—ready to go foods whose cost is considerably below that in even moderately priced restaurants. They also maintain an element of authenticity in a globalizing economy. A few street food connoisseurs observed that fortunately for those seeking local flavor on a budget, puestos offer a product that is fresher, less expensive and “more Oaxacan” than the “gringo fast food” available at the McDonalds one kilometer away.

Jayne Howell is professor of anthropology and Latin American Studies at California State University Long Beach. Her ethnographic research focuses on the intersection of gender, rural schooling and employment in Oaxaca, Mexico, as well as, on tourism and social movements. She is vice president of the Southwestern Anthropological Association and past president of SUNTA.