Making Futures in the Capitalist Landscape of Performative Promises

How do people make futures for themselves amidst the gap between promises of revitalization made by the authorities and the uncertain realities of life in postindustrial societies?

The performative promises of aspirational futures, promises of something else that is yet to come, theatrically made, and often doubted, have a particular significance in the peripheral places that struggle to be included in the circulation of global capital. In places like Bor, a Serbian copper-processing town depopulated and majorly affected by deindustrialization and post-socialist transformations, individual and collective futures are highly uncertain and confined. For that reason, promises of the revival of an industrial company and the town enacted by industrial and political elites reverberated quite strongly among citizens. What I found throughout over a decade of ethnographic research in Bor was that the very performative aspects of the promises were crucial to their triumph. They enabled people to maintain hope through their ambivalent engagements with them, which also kept many citizens invested in the broader project of the mistrusted revival.

My forthcoming book Staging the Promises: The Future-Making Practices in a Serbian Industrial Town explores this particular moment in Bor. It asks how individuals made their futures possible while engaging with such promises for the future: successful prospects for the down-at-heel copper-processing company (a former Yugoslav industrial giant), a revival of the dilapidated town, environmentally clean futures for a highly polluted setting, and so on.

A number of multistory buildings stand against a cloudless, bright blue sky. One smokestack is visible in the distance and a few cars and people are traveling along the street.
Credit: Deana Jovanović 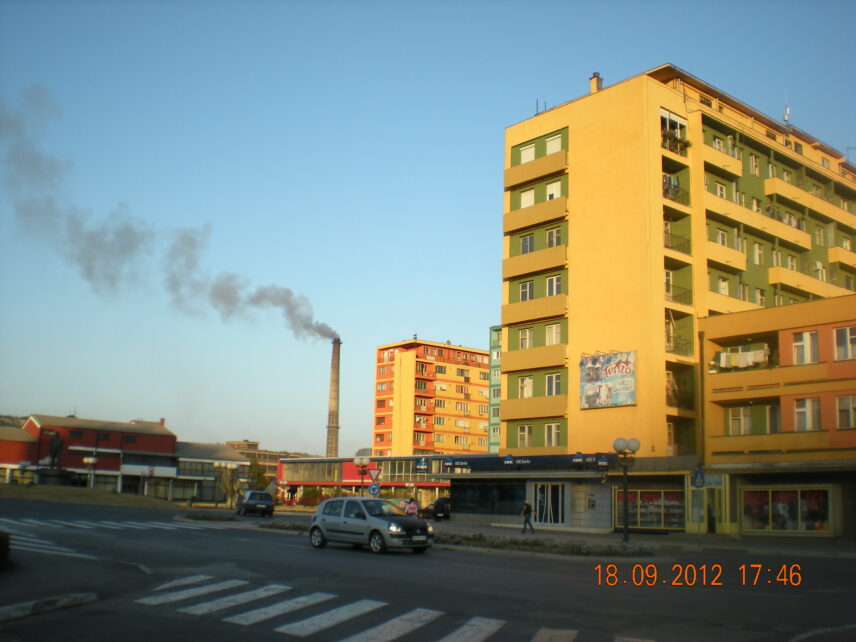 Promises of enhanced futures, materialized through theatrical performances, have played an important role within populist politics. They have also been significantly relevant in what has been marked as the “post‐truth” era. The process of staging the promises of better, revived, or aspirational futures, often doubted and assessed by their audience as not entirely being the real thing, are very telling about the performative ways through which the process of shifting the social and the political have been globally achieved. Such shifting is visible in the case of the United Kingdom, for example, which officially left the European Union (EU) one year ago. This was the result of the Brexit referendum, a campaign which promised the United Kingdom that its citizens would “get back control” from EU governments and bureaucrats and carried the promise of a “bright future.” There has since been an increasingly widespread experience of broken promises. The feeling of losing freedom has become resonant among those who voted for the United Kingdom to remain in the EU. The power of the performances that pledged the promises, almost six years ago, has left a significant impact and shifted Britain’s future in a particular direction. Many promises in this campaign were theatrically performed, from the promise of bringing back control over the market to taking back control of immigration. Embellishment of the truth and what Ivor Gaber and Caroline Fisher call “strategic political lying” have been detected in statements by populist political actors during the campaign. Such performative promises were materialized, for instance, by a controversial red bus for the Leave campaign, which toured the United Kingdom during the campaign, emblazoned with the claim that leaving the EU would divert £350 million to the National Health Service.

Manifestations of the promises through their constant performance of the revived futures to which their audience could aspire are particularly resonant among those who feel excluded, left behind, or are cast outside the circulation of global capital (but certainly not limited to them). They are also tightly connected to the experience of what Gillian Evans, writing about uncertain conditions and precarious lives in many contemporary cities of the world, calls “the failed promise of postindustrial society.” Apart from the promises of Brexit, the dramatic exemplar is also former US President Donald Trump and his promises of making “America Great Again.” His theatrical efforts were prominent, especially in his assurances that an industrial renaissance would occur in Pennsylvania and West Virginia. The promise that coal and steel would contribute to the revival of the US economy, based on the promises of the past’s futures, aided his victory in the industrial Midwest.

The website Trump’s Broken Promises, made by the Center for American Progress Action Fund (a US independent, nonpartisan policy institute and advocacy organization), shows that the promises (and their nonfulfillment) left a significant impact on everyday lives across the United States. The website shows, by providing detailed accounts across different states, how Trump’s administration broke the core promises given to different audiences: workers, families, consumers, and seniors. The website documents how, in fact, the big, wealthy corporations benefited at the expense of ordinary citizens. While various performative promises of something else that is supposedly yet to come are certainly not only related to the Western context through which the political power, profit, and new policies are generated, it is important to take into account one more element of their impact. Namely, as they appeal to the future, the temporal contracts between the performers and the citizens are being remade.

What kinds of temporal effects do such futural performances leave on citizens? How do they alter or shift citizens’ futures? How do they affect their present? How do material practices of staging the promises (similar to the cases of the promise made by the circulating red bus in the United Kingdom or the vast promises of reindustrialization in the US) impact quotidian future-making practices? In Bor, the site of myriad (populist) performances of promises of revival, welfare, and betterment, performative promises significantly inflected the very temporalities of those who engage with them.

As an example of this temporal transformative power, while industrial elites and politicians enacted the promises of soon delivering clean air to Bor, residents eagerly engaged with the performers to look for opportunities that they could provide in the immediate and near future (such as obtaining cash compensation for pollution). Distant futures were always evacuated (to adapt Jane I. Guyer’s notion of the “evacuation of the near future”) not only from the performances, but also from the ways the individuals engaged with them. The staging of promises of aspirational futures played not an accompanying but rather a crucial role in the ways people made their futures possible in the town, whose raison d’être had been brought into question by global, post-socialist, and post-Yugoslav transformations.

An article from a magazine forms the top half of the image: a photograph from a construction site and a portion of text. Two photographs side by side form the bottom half of the image. One shows a number of pipes, a large metal vat, and other machinery. The other shows a large sign, seemingly outside a larger work site.
Credit: Deana Jovanović 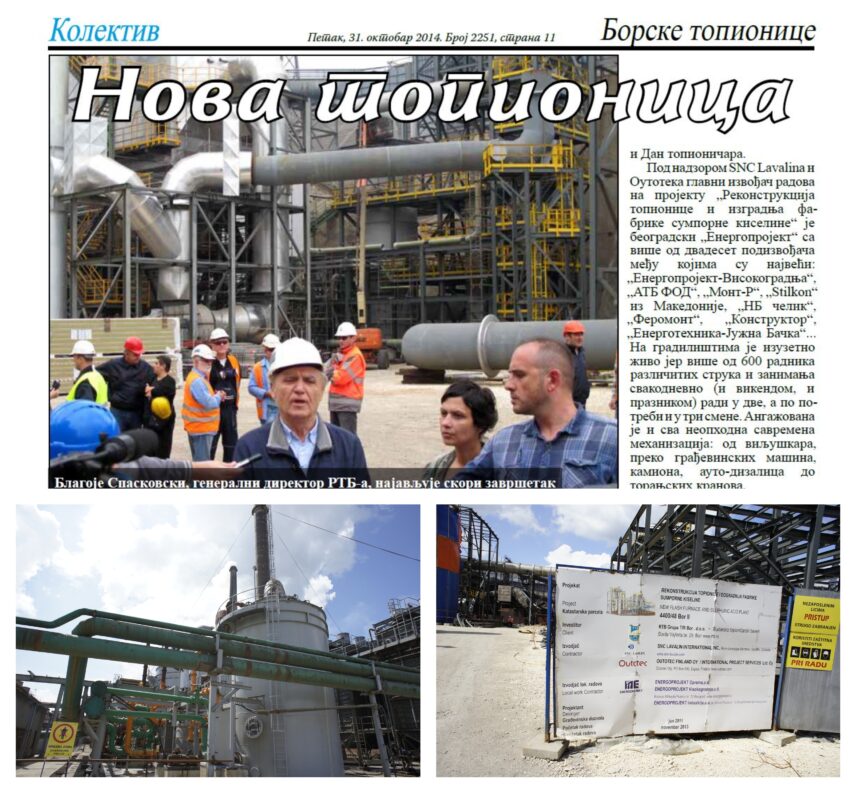 The stage of the promise of nonpolluted futures. Above: “New smelter,” the article from the official PR magazine of the copper-processing company RTB Bor, prior its privatization (Kolektiv 2014, 11) – the image shows the General Manager announcing its near finalization. Below, left and right: the site of the reconstruction, June 2013.

The story of Bor goes beyond an inspection of populist politics per se. Instead, this town stands for all late-industrial towns but also for all the other places across the globe where the past’s futures, often embedded in material ruins, serve as fruitful playgrounds for the promises of their renewal. While I look at what projections of futural promises temporally “did” in everyday life, I have provided little extant fine-grained details of the performative processes through which the capitalist futures were remade in this town that was embedded within the global landscape of capitalism.

Disturbing images of war, from the recent Russian invasion of Ukraine and other ongoing conflicts to widescale refugee crises, the COVID-19 pandemic, and rapid climate change, all produce a pervading feeling that the future is increasingly less tangible and difficult to imagine. Hence, as Rebecca Bryant and Daniel Knight point out the future is globally felt to be in crisis. Yet, paradoxically, in spite of widespread “future fatigue” and even a growing weariness of dystopian visions of the future, as detected by William Gibson, political stages are bursting with theatrical promises of bright futures on a global scale. Inquiring how individuals engage in future-making practices while experiencing the gaps between the promises and “the reality” is vital today for a better understanding of how individual and collective futures are made likely within what David Harvey has identified as the unequal spatiotemporal conﬁguration of global capitalism. The story of Bor provides a vantage point from the semiperiphery of Europe on the temporal effects of promissory performances and the performative ways through which contemporary capitalist futures are remade on a global scale

Deana Jovanović is assistant professor of cultural anthropology at Utrecht University. Her research focuses on future-making practices in the context of environmental and infrastructural struggles across industrial towns.