Moon Landing as a Critique of Free-Market Capitalism?

The moon landings serve as a reminder that American exceptionalism is a collaborative effort.

At a time of extreme political partisanship when Americans view each other with considerable suspicion if not downright animosity, it is quaint to think back 50 years ago to the summer of 1969. A similarly polarized country that waged war on itself over US involvement in Southeast Asia managed to come together to celebrate what many regard as humankind’s greatest achievement. The first moon landing and subsequent manned forays still resonate as a unifying moment of historical magnitude that will doubtfully be repeated in today’s ideologically fraught times.

These six missions from July 1969 to December 1972 evoke the boundless ingenuity and technological prowess, especially in the face of considerable risk and uncertainty, for which the United States and its political economy has become largely synonymous.

With a half-century of hindsight, to suggest that our views about the inaugural lunar landing are tinged with more than just a little nostalgia is not an overstatement. If anything, the mission has become firmly embedded in the global consciousness as an example of what happens when spirited American can-do-ism meets the seemingly insurmountable challenges of a new frontier. Such sentiments are difficult to dislodge seeing as the entire Apollo program follows a rather compelling narrative trajectory that begins with President Kennedy’s 1961 challenge to land a manned spacecraft on the moon by decade’s end. 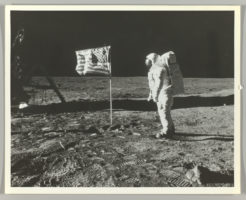 As the recent films First Man(2018) and Apollo 11 (2019) render in such harrowing detail, mission success was never a foregone conclusion. Numerous problems and close-calls plagued Apollo 11 both before and after its July 16, 1969 launch—so much so that the realities of hurling Michael Collins, Neil Armstrong, and Buzz Aldrin into the cold reaches of space, landing two of the astronauts safely on the Sea of Tranquility, and then returning the trio home to Earth without harm produced as much gut-churning anxiety-among NASA personnel and global television audiences as it did awe-inspiring exhilaration.

It is only fitting that this seminal space voyage—this “giant leap for mankind”—was conceptualized and executed in a country widely touted as a land of possibilities, as a place where hard work and inexhaustible grit can transcend even the most adverse of circumstances. When freed from external constraints, so the popular narrative goes, nothing can impede the US imagination. Such notions are interwoven into the basic fabric of the American mythos, illuminating aspects of national character that guide individual and collective behavior across time and circumstance, giving shape and texture to the aspirational dreams of those always seeking something more.

If these sentiments echo the talking points powerful business lobbies like the United States Chamber of Commerce routinely wield when pushing their pro-growth agenda, it is because they cast the American way of life in the most romanticized way, or the privilege it as a system well above other political economy possibilities. Adhering to anything less than this accepted line of reasoning leaves one open to criticisms of not being truly American. In the highly charged political climate of 2019, it might even get you labeled a “socialist.”

As New York Times columnist Paul Krugman highlights, the term “socialism” gets bandied around nearly every election cycle as a catchall term to scaremonger Americans into opposing any policy that limits inequality or strengthens the social safety net. Many of the federal government’s most enduring and successful initiatives, such as Social Security and Medicare, were initially met with significant resistance, in part because they would put the United States on “the road to serfdom.” Recent proposals for “Medicare for All” and the “Green New Deal” have certainly met with this strong reaction.

The common argument against such “socialism” is that the challenges confronting the United States are best addressed through a free market approach, where unfettered competition naturally sorts out society’s winners and losers. Of course, recent US history is rife with all sorts of examples of “corporate socialism,” where the government privileges multinationals and the 1 percent with various tax breaks, subsidies, and tax havens over everyone else. Never mind that some of the United States’ most iconic sports leagues including the NFL, NBA, and NHL—hose supposed bastions of pure competition where performance solely determines success—operate under decidedly socialist principals to ensure parity among member teams.

Against this backdrop, it seems rather ironic that the first manned lunar mission—arguably the definitive touchstone of twentieth-century American exceptionalism—was spearheaded not by free-market entrepreneurs (no Elon Musk or SpaceX in 1969) or captains of industry (“Who is John Galt?”) unshackled from the inhibiting bonds of government bureaucracy and looking to monetize space travel. Rather, the entire endeavor came about through the collaborative efforts of government and government-contracted mathematicians, scientists, and engineers in a state-sponsored megaproject that likely outrivals anything that even the most centrally government-planned economy could devise. With a price tag of some $25.4 billion ($107 billion adjusted for inflation) in taxpayer money, the Apollo program was accepted, albeit not unproblematically, as a reasonable outlay and appropriate concentration of government power.

Perhaps this had to do with public perceptions about space exploration during this time in American history. In the 1960s, a time of peak tax rates, strong unions, and low socioeconomic inequality, most popular conceptions of manned spaceflight still adhered to utopian visions of discovery and egalitarianism. Much like the original Star Trek series—not yet the franchise juggernaut popularized by syndicated reruns—NASA retained an iconic appeal that evoked future possibilities for humankind that existed beyond crass consumerism or short-term profitability; one that continues to inspire millions worldwide albeit in a different way. After the Apollo program ended in 1972, however, there came a long litany of events, including the 1973 oil crisis, Watergate, fall of Saigon, Iranian hostage situation, and decline of US manufacturing, that left many Americans feeling jolted and questioning their country’s place in the world.

Among other things, these events threw the costs of manned space exploration into stark relief. Some ten years after the original Star Trek boldly went into cancellation, and right around the time the neoliberal policies of Margret Thatcher and Ronald Reagan began exerting their hegemonic sway over global politics and trade, an obscure short lived science fiction series starring Andy Griffith premiered on ABC television called Salvage 1. If Star Trek’s opening narration reflects the strains of undiminished optimism still present in 1960’s America, then the lead-in to Salvage 1 offers a more cynical take on human space exploration.

Griffith’s character actually tells viewers “I want to build a spaceship, go to the moon, salvage all the junk that’s up there, bring it back and sell it.” And that is pretty much what happens in the show’s pilot episode; a rugged individual bucks convention to exploit government resources for private gain. Could there be a more apt and prescient foreshadowing of free-market capitalism’s direction over subsequent decades? Unlike the forgettable Salvage 1, does Star Trek’s lasting appeal say something more about what is truly needed to tackle humankind’s most pressing problems?

Salvage 1’s inability to find an audience not only belies the public embrace of socioeconomic and political policies that not only increases inequality but also privileges corporate interests over everyday Americans. These shifts in government priorities have similarly diminished NASA’s mission scope. Since the Apollo program, the agency has focused primarily on low-Earth orbit flights with an intended transition to commercial operations for increased private sector involvement. While NASA continues to promise a return lunar mission and eventual trip to Mars, such efforts remain contingent on budgetary concerns which are always subject to reconsideration. The socialism of US manned spaceflight, which arguably gained maximal expression with Apollo 11 and the original Star Trek series, now appears a relic of a bygone era when the federal government still inspired imagination as a primary vehicle for achieving the impossible.