Where were you when Apollo 11 landed on the Moon?

The topic of the Apollo 11 moonwalk on July 16, 1969, stirred a range of memories for senior anthropologists. Myrdene Anderson, then a graduate student at Yale, even remembers what she had to eat that evening: poached salmon, cooked by fellow grad student Michiko Takaki. Fifty years on however, she feels cause to question her recollections. 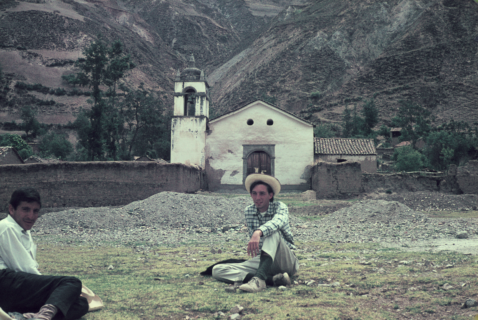 Tim Wallace (center) with a resident of San Miguel, La Mar, in front of a chapel in a highland community, Peru, around 1969. Tim Wallace

Others remember the date with confidence. Margo Smith was doing fieldwork in Lima, Peru. There was great anticipation of the moon landing, though not without concern, because television stations were not equipped to receive the transmission for local broadcast. They were hurrying to upgrade their equipment in time to broadcast it and, just hours before the landing, this was accomplished. …Two friends and I decided to watch the event together. One dashed out for a couple of bottles of champagne, which we began to uncork early. By the time Neil Armstrong was stepping onto the moon, my eyes were glued to the TV screen with total concentration.

In the weeks that followed, strangers would approach me in public to offer their unsolicited opinions. Most were positive —the moon landing was exciting or a fine accomplishment. This was a pleasant surprise because it was not uncommon for Peruvians to tell me they thought I was a spy left over from Project Camelot. A few men, however, believed that the entire moon landing was an American hoax.

Paul Doughty was also in Peru in 1969, visiting Margo, his graduate student. On his way home, he visited an Indiana University colleague, archaeologist Wesley Hurt and his family, at their summer project near Bogotá, Colombia, and found much excitement there surrounding the dawn of space travel. When the rocket was nearing the moon, I joined Wes and his family in search of a television where we could watch the landing—a difficult task, since TV reception there was awful, and anywhere it was possible to see something was packed with enthusiastic Colombians. We were the only gringos in the crowds. The safe arrival was wildly celebrated as people whooped and took to the streets of the small town, name long forgotten. Later, I took a bus headed for Bogota airport, and at least a dozen people had radios to their ears, listening to the moon takeoff and the return to Earth. Seated in a back seat I was identified as a “gringito” and people waved to me, raising their hands as though toasting me, and cheered: “Que vivan los heroes, los astros!” Congratulations rained down on me as I modestly declined the honors heaped on me, cheerfully receiving this laudatory excitement in the name of my country and fellow citizens!

Also in Peru in mid–1969 was Tim Wallace, and he found a similar response. Doing fieldwork on Quechua linguistics in a small community that later became his PhD research site, he was also getting married to a Peruvian. Local people had heard about the moon landing on the radio, as had I, and were amazed to think that Americans could do this, congratulating me on our success. I was surprised they had even heard it at all, though guess I should not have been. It shows us how often we forget that people in remote areas of the world are not as cut off from the outside world as we so-called “moderns” think. Today I’m chagrined I was not more impressed.

George and Sharon Gmelch recall their experiences with the moon landing while being first-time fieldworkers. We were living in a highland Mexican village as graduate students participating in the National Science Foundation/Pittsburgh field program led by Hugo Nutini and Thomas Schorr. Since no one in our village on the slopes of La Malinche, a 14,000-foot dormant volcano, had television we made our way into the state capital of Tlaxcala to watch the moon landing on a fuzzy screen in a hotel’s “television room.” We were blown away by what we saw and, as best we remember, quite proud of this amazing achievement. But when we returned to our village we discovered that some people had heard nothing about it; others doubted that such a thing was even possible. It was a stark lesson of the difference in our two worlds.

Bill P. Mitchell remembered how a conversation in Peru about the landing caused him to reflect on the very context of knowledge and understanding. In 1973, he returned to his field site of Quinua (Ayacucho, Peru). One of the persons I had worked with for my dissertation research in 1966–1967 said something to the effect, “I heard the United States sent a man to the moon.” I replied, “Yes, they did.” He responded, “You believe that?” Left open-mouthed, I responded in the affirmative but wondered at how or why I was so certain. Of course, I “knew” because I was familiar with all the technology etc., that went into the trip. For years afterward Bill used this interchange in his teaching as an example of how belief and knowledge rely upon an entire set of surrounding knowledge and assumptions.

Other challenges to how we know what we know were noted in Ethiopia. Herb Lewis recalls the Soviet rocket Luna 2 landing on the moon 10 years earlier, on September 14, 1959. I was in the highlands of Southwest Ethiopia (Jimma) in a Muslim Oromo area. Someone mentioned this when we were gathered in the house of Abba Garo, a knowledgeable and respected elder. Abba Garo said, “No. They are just trying to frighten the rest of the world.” I was surprised by his political astuteness (given the state of knowledge of the outside world in rural Ethiopia at that time) but expressed my belief that they had done it. “No, it isn’t possible,” said Abba Garo. “The moon is covered with four skies. It couldn’t get through.”

From the Pacific, Dorothy Billings describes a different reaction. Though not in the field, she remembers the reactions of friends there soon after the moon landing. My friend Israel, a New Irelander who had been a medical assistant and a coastwatcher during World War II, kept saying to me, “Look up there at the moon, the Americans are up there, walking on the moon!” Of course we were aware and said “wow” and were impressed that Armstrong had prepared something appropriate to say—but I remember thinking, after Israel talked to me, that I needed to give more respect to this achievement for “mankind.”

In contrast, Alice Kehoe and family noted some disinterest in France, where they were volunteering at the excavation at the Roc de Solutré, in order to see whether its Solutrean horse drive resembles the bison drive sites we were familiar with. (It does.) We all heard about the moon landing. Everyone we were with, mostly French students and volunteers, a few from adjacent countries, were just saying, “Oh, nice what the Americans have done.” It was not, apparently, particularly exciting; not as if France had done it, even maybe because France hadn’t done it—it couldn’t be a really great landmark in history.

Finally, Myrdene Anderson wonders just how reliable our memories really are. She thought that about that time, her major professor, Hal Conklin, had written to the editor of Science, shaming the journal for publishing a cover photograph of the moon, upside down. In this, he was right, except she now learns it wasn’t the moon, it wasn’t a cover image, and it wasn’t in 1969. Inspired by her distinct memory, Myrdene had delighted in circulating any contemporary shot of celestial craters in class so students could rotate the picture to experience the “dimple-pimple” effect: the optical illusion that results from humans expecting light to originate from above, specifically from the northwest corner of the graphic image, resulting in shadows toward the southeast of the page. Rotating the page will render craters to mounds and vice versa. While preparing this paragraph, with Pat Afable’s assistance, Myrdene discovered that Conklin’s letter dates from 1976, Miklos Pinther was coauthor, the picture was of Alaskan thermokarst terrain, and the proper technical expression is “pseudoscopic illusion”—an effect that also affects our perception of the moon’s rugged terrain.

Dorothy Billings, professor emerita at Wichita State University, first went to New Hanover and New Ireland, PNG, in 1965. She returned in 2005 for the ninth time.

Paul Doughty, professor emeritus at University of Florida, Gainesville, was the longtime corresponding secretary of ASA.

George Gmelch is professor of anthropology at the University of San Francisco and Union College. His most recent book, with Sharon Gmelch, is In the Field: Life and Work in Cultural Anthropology.

Sharon Gmelch is professor of anthropology at the University of San Francisco and Union College.

Alice Kehoe conducted fieldwork with her late husband Tom Kehoe for many years in Blackfoot country in the Northwestern Plains. She continues to visit the Montana Blackfeet and keep up with Indian Country issues.

Susan M. Kenyon, present ASA Secretary, is professor emerita at Butler University. Her main research is based on longtime fieldwork in Sudan.

Herb Lewis, professor emeritus at University of Wisconsin, Madison, has done research In Ethiopia, Israel, and Wisconsin. He currently works on the history and culture wars of anthropology and his most recent book is In Defense of Anthropology: An Investigation of the Critique of Anthropology.

William P. (Bill) Mitchell, immediate past-president of ASA, is Emeritus Freed Foundation Professor of Anthropology at Monmouth University. He began research in Peru for his PhD dissertation in 1965 and has worked with people from that same Andean community ever since.