Nancy Munn, an imaginative and eclectic cultural anthropologist who developed expansive theoretical models of space and time, world-making, and value, died in Chicago, Illinois, on January 20, 2020. She did lengthy field research with Walbiri people in Yuendumu, Central Australia, and on the island of Gawa in the Massim region of Papua New Guinea. By close analysis of people’s activities and talk, primarily in these two places, she contributed original solutions to long-standing problems in anthropology and philosophy involving art, aesthetics, symbolism, the body, self-fashioning, experience, exchange, material form, memory, place-making, ritual, intersubjectivity, and social continuity and transformation.

Born in 1931, Nancy grew up in a diverse Manhattan neighborhood near 79th St. and Madison Avenue and attended Public School 6. She was raised by her mother, a fashion model, who had separated from her miserly, uncaring father. Nancy’s parents kept their Jewishness secret, even from her; her mother changed their name and “passed” to deflect antisemitism. Nancy later described herself as “starry-eyed” when she enrolled to study the humanities in the “Western Civ”-oriented College of Letters at the University of Oklahoma and continued for an MA in Anthropology at the University of Indiana, where David Bidney encouraged her to apply for a Fulbright Scholarship “to study Aborigines.” As a woman, she had to overcome serious obstacles set in her path by the Fulbright program and Australian government. First, her Fulbright interviewers challenged the premise that a woman could do fieldwork in an Indigenous Australian desert community. Then, once settled there, the officious Australian administrator at Yuendumu banned her from living within the settlement. So she spent three months exiled in Alice Springs until her PhD supervisor, Bill Stanner of the Australian National University (ANU), came to broker a compromise with the administration at Yuendumu, allowing her to return. Lacking funds after fieldwork, Nancy was sent by Stanner to his friend Lauriston Sharp at Cornell who found support for her to write her ANU dissertation in Ithaca. She taught at Bennington College (1961–1963) and the University of Massachusetts, Amherst (1967–1976) before spending the rest of her career at the University of Chicago (1976–1997). For more than 20 years post-retirement she remained active in the Chicago Department of Anthropology and in research and writing. Her most influential publications are finely-wrought articles on the making of Gawa canoes (1977), the famous regional exchange system of kula (1983), the anthropology of time (1992), the cultural construction of memory (1995), and Indigenous Australian spatial taboos (1996). She wrote two brilliant monographs, Walbiri Iconography (1973) and The Fame of Gawa (1986). Her late life book project, unfortunately uncompleted, was Places in Motion, on memory and the experience of places changing in Indigenous Australia and nineteenth century Manhattan.

In her teaching, Nancy emphasized close, respectful attention to ethnographic particulars. She guided her students to work with the detail of actual events in their sequences, with their specific participants, places, tempos, objects, aesthetics, and qualities of feeling. Such activities appear to presuppose a given world, morality, and value hierarchy, but in fact they contribute in making that very world in which they take place. Throughout her life she explored this dynamic, collective creative process. Future generations still have much to learn from reading her work.

Short-haired woman is wearing a turtleneck and sweater, her expression a faint smile.
Credit: University of Chicago Photographic Archive, apf1-12707r 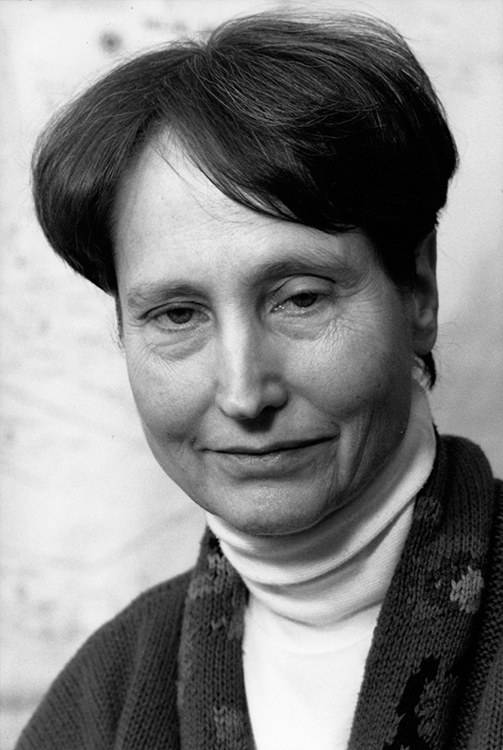