Network Analysis of a Fishing Community in Japan

Examining the social organization of household groups gives insight into the decline of fishermen in a Japanese town.

Hamoto, my field site, was one of the fishing towns that flourished following World War II by feeding the Japanese workforce that made possible the post war economic boom. In the 1960s, however, the fish “disappeared.” Local people don’t know why fish numbers declined, but they have continued to drop ever since. Consequently, many fishermen quit fishing and migrated to city or adopted different occupations. At the heyday, over three hundred men made their living as fishermen. Fifty years on, in the 2010s, only a handful of full-time fisher folk remained. This decline was not seen to be a significant problem, however, because the electric power company installed nuclear reactors along the coast, creating an abundant revenue stream for the town and employment opportunities for local people. Today, however, the nuclear power plant’s contract is coming to an end, and the decline in fisherfolk has become a pressing local concern.

Understanding the social relations that enabled the sustainable fishing practices that existed until World War II, is not simply a matter of nostalgic “salvage” anthropology. It is, rather, an important part of understanding resource management mechanisms of the past that will allow the people of Hamoto to better control their future. As part of my research into local perceptions of risk and resource management, a type of household based social group has emerged as a powerful tool for organizing sustainable fishing: these household level groups are called yago. Yago flexibly connect different lineages, clans, and villages through the exchange of people. These networks of exchange served to suppress competition among the fishing units and effectively prevented overfishing.

To analyze yago, I employ Social Network Analysis (SNA). The networks were generated from historical data displayed in the public archive at the Hamoto fishing museum, as well as from interviews with local people about yago membership and marriage exchanges. I recreated the representation of yago networks at the levels of lineage, clan, and village based on three different types of marriage exchange: 1) female transfer, 2) male adoption and 3) neighbors “taking over.” With the SNA plot visualization, it is possible to represent a simplified pattern of people’s movement, including the frequency and direction of exchange.

A number of different colored clusters of dots are grouped together. Some are only a handful of dots each, but there are larger groups in the center of the plot, overlapping with one another. These larger groups are further circled by two separate outlines (one red, Y, and the other blue, X) and there is one line of connection between these red and blue outlines.
Credit: Chisaki Fukushima 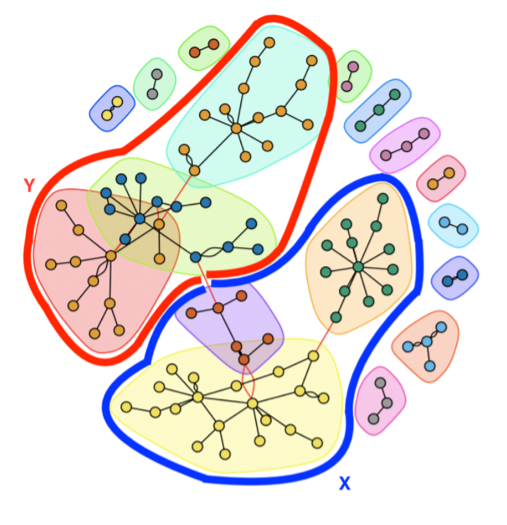 Yago（屋号）consists of the smallest social and economic unit, ya屋 “roof,” and title, go (号). Its members do not necessarily share any biological connection with one other. Yago demarcates a person’s occupation and village. Historically, fishing communities were composed exclusively of fisherfolk households and all certified fishermen had to live in such communities. They have distinct type of yago from other occupations like merchant, farmer or service. The yago term, or name, identifies fisherfolk by their village, clan and occupational rank (Tamanoi 1985) . In Hamoto today, yago are frequently used within the community and among people with whom fisher folk conduct certain kinds of business outside of the community. The number of yago in use today is much lower than the historical records suggest it was, however, I believe it is likely that local people would have recognized all sixty yago names in the community in the past with relative ease.

Only the head of the household is called directly by the yago term. All other household members are referred to by the possessive form such as “A’s grandmother oba-san” or “A’s younger brother”. Although yago is rarely used elsewhere in modern Japan, most local people over the age of 30 in Hamoto know their own yago and addressed themselves and others by yago.

Yago confers rights and restrictions and social identification. In order to fish in the sea of Hamoto, one had to have a fishing right assigned to a yago. Without an established and accepted yago membership, it was extremely difficult, and rare, to have be given the right to fish in the sea around Hamoto. Yago membership is not only about fishing rights, however, it is also about occupational restrictions. A yago could have only one fishing right per business. In other words, a household could only operate one type of fishing method in designated areas.

The diagram below represents the movement of yago members between yago households who participated in team fishing between the 1920s and 1960s. The circles, or nodes, are individual yago. Members of the same clan share the same color. The lines represent transactions between the nodes, or yago. Black lines are occurrence of movement of people, while the red lines indicate bridging between the clans. The numbers of line indicate the frequency of the movement. Two lines starting from one yago and ending at the other means there were two transactions between the yago. The next step is to assess the direction of movement and look into the different type of movement variation in three ways: 1) marriages, 2) adoption and 3) neighbors “taking over.”

There are two dominant groups, surrounded by two thick red and blue lines. In addition, there are small groups which are peripherally connected to the local networks. Members of these small groups are mainly seasonal laborers who have married local people. There is one connection bridging the two major networks. The clans within each village follow the local ranked hierarchy (groups in green and purple). The clans at the top of the village hierarchy ran the top fishing teams which enjoyed greater financial and political success. They were able to invest in the next generation’s education and property. Many yago of the bridging clans have now quit fishing and moved out of the villages to bigger houses nearby. The members of these clans now typically work as public servant or elite corporate workers for the nuclear industry. The families that have continued fishing are from the clans in the lower hierarchy. Historically, they were more disconnected with the other village group, however, due to the disappearance of the historical bridging clans (the ones who are now public servants and nuclear power employees), one of them has filled the role of a bridging clan.

Yago social structure enabled fish populations to reproduce in a controlled manner to ensure sustainable fish populations. The number of yago were tightly controlled by fishing councils. This capped the growth of fisherfolk. The fishing councils were usually composed of members of the top-ranking clan. These controls might had been enough to maintain some kind of equilibrium in the past, however, with modern industrial fishing and global markets, the situation is more complicated. Examining yago social organization therefore helps us understand how people coped with uncertainty in the past but it can only partially inform about managing contemporary competition over resources and distribution. 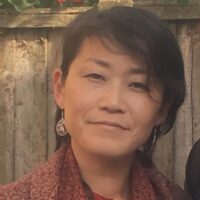 Chisaki Fukushima is a doctoral research candidate in environmental anthropology at the Centre for Rural Economy at Newcastle University, United Kingdom. Her research has been funded by the Great Britain Sasakawa Foundation.