Noncitizens and Spaces of Reprieve in Putin’s Russia

In a context of growing anti-migrant legislation, Moscow activists create alternative spaces for education and inclusion. 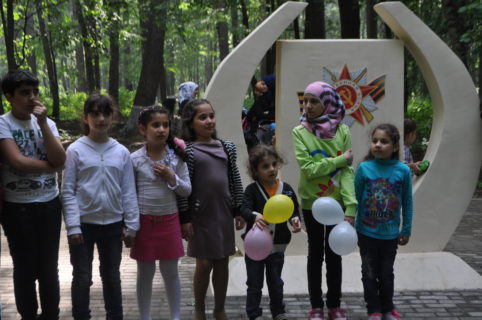 Public discourse across North America and Europe is increasingly defined by a tension between the (constitutionally protected) rights of citizens and the international human rights of noncitizens. This is also the case in Russia, where activist-organized schooling for refugee and migrant children creates a space in which ideals of citizenship and belonging are negotiated. I call these spaces of activist-migrant interaction and collaborative efforts to build a place of belonging for noncitizens, “spaces of reprieve.” They generate points of connection for noncitizen children and their parents and for the activists seeking to forge alternative spaces of collective, progressive social practice within contemporary Russia, a place widely defined in recent years by anti-migrant sentiment.

The first time I visited the Komitet grazhdanskoe sozdeistvie (Civic Assistance Committee or GS), an internationally recognized Moscow-based human rights organization that provides legal aid to undocumented migrants and documentation of their legal right to be temporarily in Russia, I sat with a social worker (“Marya”) who was doing intake interviews. A long line of clients stretched into the hallway. Young men from Congo, Egypt, and Tajikistan came and sat one-by-one at her desk to explain—with the help of an interpreter—what misfortune had brought them to GS. Marya typed their information into her database, the initial step for pursuing any legal recourse for migrants. Between clients, Marya took a call about a temporary visa extension for a client from Turkmenistan; the client needed to be in the country while her three-year-old daughter underwent critical eye surgery. The woman and her daughter had been outside a Moscow subway station just a few weeks earlier, when an angry group of young men ran by and threw an unknown substance in their direction. Seconds later, the young girl cried out in pain and clutched at her eyes; the substance the young men had thrown was acid.

While most of the people appealing for legal aid at GS do not recount such horrific experiences, the continuous stream of migrants seeking support from the organization attests to the presence of widespread popular anti-migrant sentiment in Russia. Migrants have arrived in Russia, and especially Moscow, in growing numbers since the end of the Soviet Union in 1992, propelled by economic insecurity in Central Asia and a strong oil economy in Russia. More recently, people fleeing civil war in Ukraine and armed conflict in places such as Syria and Congo have also sought refuge in Russia, a place to which they are connected via colonial histories and “associative obligations” that continue to shape their lives as noncitizens (Benhabib 2012). According to UNHCR, as of late 2017, Russia had 82,148 registered stateless people; there are thousands more unregistered migrants and refugees and at least 4 million temporary labor migrants, predominantly from Central Asia (Lenta.ru 2014; Demintseva and Kishnevsky 2016; UNHCR 2018).

One of the pressing issues migrants face is access to education for their children. Moscow’s schools require documentation of a recognized, legal residential address to register a child, a condition that most migrant families cannot meet. Most migrants live at addresses where they do not have a registratsiia, so they cannot provide this information demanded by the recently established electronic school registration system. The municipal resistance to registering noncitizen children in school, despite the Russian constitution’s clear statement of the right for all children to be educated, is just one of many means of policing noncitizens in Russia. Such egregious denial of children’s human rights has provoked tangible citizen action.

Citizen action and spaces of reprieve

The spaces of reprieve for noncitizens in Russia are shrinking. In Moscow, between 2000 and 2014, the city financed as many as 10 Russian language schools located throughout the city and administered as part of the local schools system. One former teacher noted that completion of the intensive, year-long Russian as a second language course was sufficient for most students to transfer into regular schools. In 2014, however, with new legislation regulating migrant flows (Andreeva 2015) and growing public hostility toward migrants in Moscow, the Russian language schools were all but shut down, and any students able to pay for the language training were required to show proof of legal residence. In 2016, the resources available for undocumented migrants were further reduced, as foreign financing for nonprofits became a criminal offence and public sentiment widely turned against noncitizens (Roth 2013; SOVA 2013). The few spaces that continue to exist aim to provide migrants with critical resources, from legal aid to access to minimal health care to some educational opportunities for migrant children.

In Moscow, a key site providing support to noncitizens seeking education for their children is a secular nonprofit program that calls itself Pereletnye deti, or the school for “migratory children,” thus creating an association with other freely moving, migratory beings such as birds. The school relies on one key sponsor, a major company in Moscow, as well as fundraising via social media, to run its programming. This is carried out almost exclusively by the 70+ volunteers who work with 90 children who attend classes held two to three hours several times each week throughout the school year and into the summer. The volunteers are predominantly recent graduates or undergraduate Russian citizens studying at various institutions in the city. Employees of consulting firms, graphic design companies, and emeritus professors also tutor students one-on-one in core school subjects, such as Russian language, math, and English. The teaching of these subjects is inflected by a philosophy emphasizing liberal values of respect for diverse cultural practices and human rights, ideals further inculcated through regular excursions to theater productions, artists’ studios, and museums, and school celebrations marking significant holidays such as International Children’s Day. 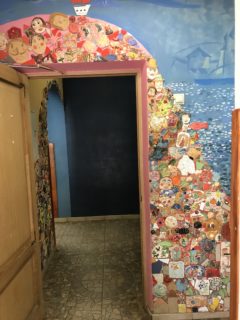 Unlike in other locations in Russia, where the noncitizens appealing to NGOs for educational assistance are largely from Central Asian countries, particularly Tajikistan and Uzbekistan, the Moscow efforts serve a much more diverse population. Over the past 25 years they have educated children from over 70 different countries, including Tajikistan, Kyrgyzstan, and Afghanistan, and most recently from Syria, Congo, and the Democratic Republic of Congo. Strikingly, the intentions of organizers and migrants do not always mesh, as one teacher recounted, “It is as if the African moms have a different tempo; they do not seem to understand that gaining fluency in Russian can make the difference between their children getting registered in school and losing out on this opportunity. The parents from Central Asia are different.” The African mothers I met regularly came to programming for their children but they were often late and some explained that they were not really sure the classes helped their children, since no matter how much education their children could access, they would still be outsiders in Russia, continually subject to police harassment.

Kovcheg is one of the oldest private schools in Russia, located in a suburb northeast of Moscow and host to another citizen-led effort to provide educational opportunities to noncitizen children. In 2016, the director, Rustam Kurbatov, organized his own program for migrant children from countries in the former Soviet Union, predominantly Kyrgyzstan and Tajikistan. The program is heavily subsidized by tuition-paying nonmigrant students and caters to those children who are either unable to enter the public school system due to poor knowledge of Russian or are struggling in a school system with virtually no support for non-native Russian speakers. Now in its second year, nearly 20 children attend the year-long program focused on improving the children’s Russian language skills, fostering creativity and self-confidence, and learning about basic human rights and rights guaranteed by the Russian Constitution, knowledge that can be key for the frequent document checks police carry out among suspected migrants in public spaces such as parks and the subway. Unlike the tutoring offered by the Migratory Children program, the Kovcheg school program is a full day and runs partly in relation to the private school; the students come together for extracurricular activities and share a single school building.

Despite being situated within an exclusive private school, the Kovcheg program, like the program in central Moscow, is animated by a sense of civic action and a need to counteract dominant narratives that position migrants as always already subject to exclusion and police harassment. When I visited the school in spring 2018, the director had just returned from the local police precinct where he had accompanied two day laborers from Uzbekistan he had met on the train and who were detained by police despite their legitimate identity papers. The director stated, “We are all originally from one country, and we should have the same rights; the school seeks to foster an ethic of acceptance, . . . albeit this is a minority view in society.” Some private school parents have expressed anxiety about the merits of having migrant children in close proximity with their own children, who they send to the school with the expectation that they will receive an exclusive education. Nevertheless, so far the school director has been able to convince affluent parents of the value of a “multicultural” and “liberal” European education provided in the unique setting of his school.

Creating access to education in spaces of reprieve might appear to be a relatively apolitical endeavor. However, in the run-up to hosting the World Cup in June 2018, as Russia heightened security sweeps and enforced bans of “one person pickets” or individuals protesting (Rainsford 2016; MediaZona 2018), there were few spaces left for public activism; advocating for migrant children has become one of the few permitted spaces for civic action. Russia is often positioned as exceptional, but as citizens and noncitizens navigate core ideals of citizenship (e.g., about access to education, diversity, and the redistribution of resources), they take part in a growing global debate from Germany to the United States to Malaysia (Holmes and Castenada 2016; International Organization for Migration 2018). In thinking about spaces of reprieve we can see how a minority can mobilize in response to shrinking prospects for noncitizen inclusion, and push instead for a society that respects basic human rights, including for children on the move.

Alexia Bloch is a professor of anthropology at the University of British Columbia. Her research focuses on undocumented migration, gendered citizenship practices, and legacies of state socialism and her latest book is Sex, Love, and Migration: Postsocialism, Modernity, and Intimacy from Istanbul to the Arctic (2017).

Correction
This article was initially published under the DOI 10.1111/AN.1059.