The acceleration of scientific research produced COVID vaccines at unprecedented speed. It also exacerbated vaccine hesitancy and concerns around safety.

In May 2020, then President Donald Trump announced the beginning of a special partnership between federal research agencies and private pharmaceutical companies, with the objective to accelerate COVID-19 vaccine development by providing strategic guidance at the federal level on resource allocation and coordination. The name of this partnership was Operation Warp Speed.

Warp speed is a concept borrowed from science fiction—namely, the Star Trek franchise. It refers to the technology used by spaceships to travel across intergalactic distances: by distorting the space-time continuum, explorers can travel faster than the speed of light. It is a name rich with imagery. It speaks not only of a futuristic technoscientific ability, but also foregrounds the initiative’s goal to compress the timeline for development, production, and administration of vaccines for COVID-19, without giving up on safety.

This goal was ambitious: the research and development of a viable vaccine technology usually takes several years of complex and costly experimentation, and here it was reduced to little more than six months. To do so, a threefold plan was implemented: initiate an 18-billion-dollar funding package to remove economic constraints; coordinate research into synchronicity; and federally oversee all activities.

Despite some late-stage issues with vaccine distribution, the project was by its own measures largely a success, and by the start of the following year, the rollout of vaccines had begun, effectively initiating a process that brought a seemingly uncontrollable pandemic within the scope of governance.

In the center, there is a colorized microscopy photograph of the COVID-19 virus with a navy-blue circular background. It is boxed into a golden cube from which six golden lines and five golden stars emerge to the left. Two golden rims surround it. Another navy-blue band surrounds the circle, with four golden stars to the left and right, and, in the upper portion, in capital golden letters the writing “operation”, and at the bottom “Warp Speed”, in the same font.
Credit: Department of Defense (DoD) 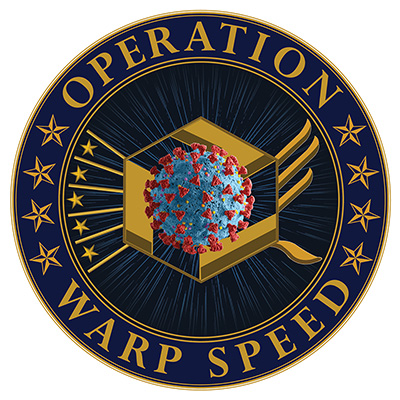 Official logo of Operation Warp Speed by the Department of Defense.

Isabelle Stengers, among others, noted how the modern experimental sciences are profoundly informed by the necessity of velocity. “Fast science” has not just the force of a framework, but of a prescription for modern researchers. In a context where velocity is the normal word of order, what needed to happen to the time-space of research to achieve measurable good results faster than ever before—in fact, faster than many thought was possible? And what do these changes mean for the relationship between science and society?

Over the summer of 2021, I was doing fieldwork in Northern Italy. I spent time with people who hold longstanding concerns about vaccine practices. Occasionally, some of them would gather in a square in the city, hang out, or organize stage performances. Often there was music playing, songs that spoke to that crowd. The lyrics to one went, “[S]apete correr cosi’ bene / per far soldi a mani piene! / Sapete gia’ cosa trovare / cosa state a ricercare? / Terroristi della scienza, state a debita distanza / dalla nostra libertà” (You run so well/when it comes to making money! / You know already what you are going to find / so what do you do research for? / Science terrorists, keep your distance / from our freedom).

Aside from the by-now-familiar rhetoric approximating COVID restrictions to limitations on personal liberty, I thought this verse was important for another reason: the writer was ironizing the fact that, in his view, vaccine research did not accelerate to warp speed as a result of larger, more widely available funding sources that removed the usual grant-hunting obstacles for researchers. Rather, the causal relation was reversed: it did not accelerate through larger funding, but because of it. In other words, in his view, vaccine research did not accelerate thanks to more available funding; it accelerated to make more money. Larger funding was not the means, but the end. His words also express suspicion towards one of the biggest novelties of Operation Warp Speed: research coordination, amassing all relevant research efforts towards a unified, predetermined end goal. He thought the teleology in warp-speed vaccine research disturbing. In his song, he seems to wonder, what does it do to call research a process that leads to an end goal that was established before research itself?

The point made in the song can be easily dismissed. Most research is done by setting targets, to the point that feasibility, the tightness of the relation between aims and methods of projects, is a big determinant for funding. The vaccine hesitant songwriter is most likely not an insider, familiar with the knowledge economy and norms of scientific research—and so he finds it surprising. But the rules of warp-speed research are different, and from this perspective the point the songwriter makes takes on a more meaningful character. His words hint at different compressions and intensifications that characterize warp-speed research: a faster rhythm and rule of movement for the navigation of the spaces of knowledge, implementing its velocity as a derivative of its target instead of allowing for the discovery of findings through a research process. In other words, he denounces vaccine research not as an exploration, but as a race.

In fact, this intensified rhythm of faster-than-possible research is achieved by compressing space as well, just like the way that the warp speed of science fiction distorts space-time to travel faster than light. Warp-speed vaccine research reconfigures the internal relations of inquiry in order to conjoin procedures, turning from discrete and sequential processes towards simultaneity. From this perspective, the second principle of Operation Warp Speed was synchronicity: the interspatial coordination of independent processes. “Normal speed” vaccine research usually works by phases. The first steps are pre-clinical, and involve benchwork and animal studies, establishing the safety profile of the medication. If promising, the vaccine candidate is administered to a cohort of volunteers. If this first clinical step yields positive results, the vaccine candidate is administered to two more increasingly large and diverse groups of volunteers. When the effectiveness profile of the vaccine is sufficiently established, the vaccine is approved and goes into production, at the end of a process averaging two to four years.

This process ensures that vaccine candidates showing negative results in earlier phases do not waste resources in subsequent trials. Warp Speed removed this constraint. Multiple phases of clinical testing as well as production happened simultaneously, with federal money covering the losses of the manufacture of a potentially unviable vaccine.

This connection between a state of emergency, widespread mobilization, and top-down management of scientific processes is powerfully reminiscent of wartime coordination of science, government, and industry. Some even suggested “Manhattan Project 2” as a tentative name for Operation Warp Speed. Like Operation Warp Speed, the original Manhattan Project was a success by its own measure―that is to say, it met its target, and in so doing it profoundly changed the practices of scientific research and the everyday lives of those who were involved in it or in its surroundings, even years after its completion. The progressive continuity of university and industry―or in other words, the blurring of the lines between science and technology, research and entrepreneurship―is not just commonplace today, but a fundamental part of the contemporary knowledge economy. The longue durée of the Manhattan Project is still with us.

What is the longue durée that is opened by warp speed research? As the vaccine hesitant singer exemplifies, Operation Warp Speed was a success, but it was conducted without any research effort into what concerned the people who were to receive this faster-than-time vaccine. Speed in research may be a positive quality for many of those who practice it, but it is not for those people who perceive it as inexplicably linked to increased risk. In this sense, the prescription of velocity, as important and even lifesaving as it has been, has had the unintended effect of sharpening and intensifying a pre-existing fissure between researchers and some portions of the public. The result is that more people hesitate to take vaccines after Operation Warp Speed than they did before, and vaccine concerns that used to relate only to COVID-19 vaccines are now extending to routine immunizations.

The research policy calculation that privileged velocity over cohesion saved many lives, but it pushed a wedge in an already growing gap. Stengers warned us of the dire consequences of a science that moves at different velocities to the sentiments of its public―and this relation is one among many things to repair and recompose in the post-pandemic world. Yet the pressing question is, Who will accept it as a priority?

Marco Dell’Oca is a PhD candidate in the Department of Science and Technology Studies at UC Davis. He studies contemporary vaccine hesitancy: his multi-sited ethnography characterizes vaccine hesitancy as a set of heterogeneous epistemic practices.