Editors’ Note: This piece is part of a SEAA column themed series “Cultural Consumption and Performance in Asia.” The articles highlight different aspects of consumption and performance in a range of Asian regions. They examine issues such as cultural curation, the uses of the past, material culture, power and market, as well as the enactment of lived experience.

Early in my research, Deaf people told me repeatedly that Japanese Sign Language (JSL) is the most valued aspect of Deaf culture and the most reliable means of communication and information-sharing. Performance genres using JSL, such as film, theater, comedy, dance, pantomime and puppet shows, are important components of Deaf culture that illustrate Deaf social issues and provide enjoyable and understandable entertainment. Through 20 years of research experience in Japan, I realized that JSL itself can also be viewed as a performance genre found in the everyday lives of Deaf people, considering the relationship between their presentations of JSL and shared Deaf identity through the consumption of information and values. Elaborating on the ideas discussed in Erving Goffman’s Presentation of Self in Everyday Life, Bohannan (1992) writes of how people accept, create, renew and reject culture through performance. I discuss in this essay these performances involving JSL, based on fieldwork conducted at workshops held by the Japanese Sign Language Atelier in Hirakata city, Osaka prefecture—a sign language circle (or club) that use storytelling techniques to teach JSL and ultimately Deaf identity. I show how culturally Deaf people are consumed with rejecting the “small-d deaf” orientations placed on them by society and striving to adapt their social roles to match their ideal “capital-D Deaf” identity.

Not all deaf people are Deaf

The deaf/Deaf terms and differentiation have been used within deaf and sign language studies in the United States since the 1980s, if not earlier. Deaf activists in Japan recently began using these English terms to describe their situation. “Small-d deaf” refers to hearing loss; deafness is seen as a disability requiring medical assistance and social welfare support to aid and/or rehabilitate the individual. In this context, oral teaching methods are stressed to help deaf individuals better communicate within the hegemonic hearing society. Such methods originated from the Second International Congress on Education of the Deaf in Milan, Italy in 1880, where a resolution was passed banning the use of sign language in deaf schools. These policies were quickly adopted by the United States and many European countries, and later by Japan in 1920. The ban on sign language in the classroom, mandated by the Japanese Ministry of Education, remained in effect until 1993. 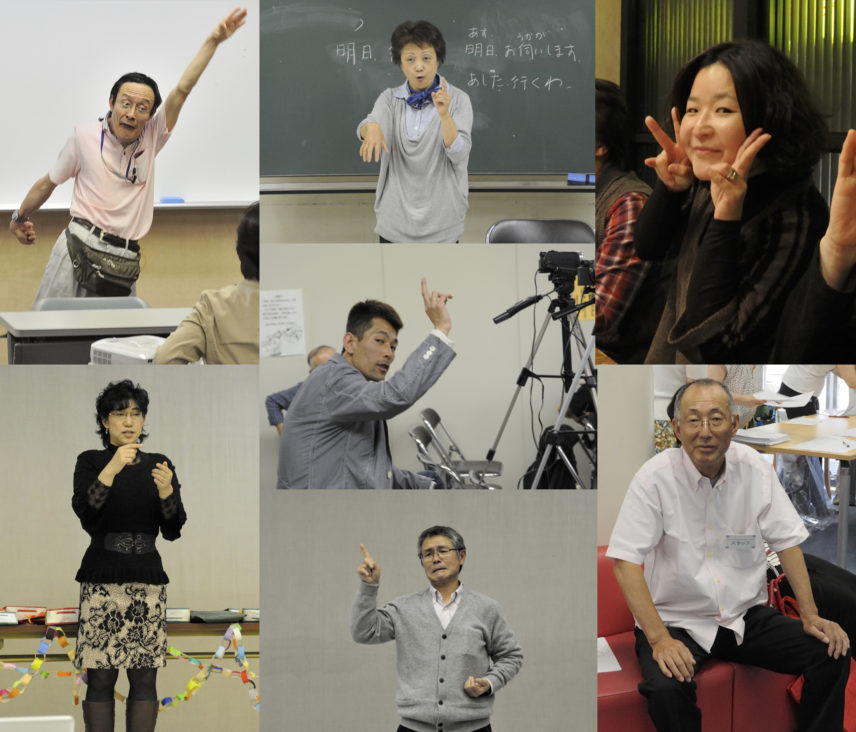 “Capital-D Deaf,” in contrast, refers to a certain cultural belonging rather than hearing loss or absence. The term Deaf was created in defiance of the deficit laden “deaf and dumb” expression, with the capital “D” serving as an empowering device that emphasizes the group identity. Culturally Deaf people view themselves as a linguistic minority that uses a visually based language. Often working together in social movements (Honna and Kato 1995), Deaf people fight against discrimination and prejudice, spread awareness of JSL, and empower themselves to make their own decisions about education, language and economic issues. Such movements can be seen as promoting an ideology of cultural independence from hearing society, an example of Benedict Anderson’s (1983) “imagined community” based on a shared identity.

Two forms of sign language are currently used in Japan: JSL and Signed Japanese. Deaf people describe JSL as their mother tongue and the language they use among themselves. Recently codified by Japanese Deaf linguists, it is different from spoken Japanese with regard to modality, grammar, word order, and worldview. Facial expressions and classifiers are used as key grammatical elements. JSL classifiers, akin to counters in spoken Japanese that are used to quantify nouns depending on size and shape, become handshapes that substitute for standardized signs. Within this form of visual communication, signers can move and manipulate a classifier like the object it represents.

Schools for the deaf worldwide, especially in Japan, primarily endeavor to teach students to speak. Instructions in pronunciation and lip reading take up so much time that deaf children are often three years behind their hearing counterparts in academic subjects. Also, not all deaf children can acquire adequate and understandable speech. Those who can pick up some speech are considered brighter than their classmates and are often mainstreamed into hearing schools. If any sign language is used in deaf schools, it is Signed Japanese, a by-product of oral education. These conditions lead to small-d “deaf” orientations, as well as “hearing disabled” and/or “hard of hearing” identities. Culturally Deaf people are critical of these conditions and outcomes; they often lament the limitations of oral education and Signed Japanese in regular academic classes and the lack of effective communication which ultimately block the realization of any shared Deaf identity.

While the national organization Japanese Federation of the Deaf has been instrumental in the recent legal recognition of JSL in some municipalities and prefectures, the most dynamic efforts in promoting JSL and resolving everyday deaf-related issues for the benefit of deaf people have been made by local grassroots groups. Although hundreds of sign language circles exist in Japan, most teach Signed Japanese to hearing people. The Japanese Sign Language Atelier in Hirakata city, however, was founded in 1997 by Deaf people as a sign language circle for the benefit of Deaf people. Atelier’s early goals were to promote JSL and Deaf culture by spreading awareness, to fight discrimination in communication and education, and to create Deaf identity in local communities.

Atelier hosts and conducts regular workshops with Deaf teachers, researchers and entertainers, with the aim of benefiting Deaf people who use JSL. A few years ago, the group started a series of workshops called the Atelier Project that was intended to be a “clinic” for teaching participants a “pure JSL” unpolluted by Signed Japanese. Except for a few hearing people, most participants in these clinics were deaf. Their previous deaf identity was based upon being raised in a hearing world, being subjected to oral methods of language acquisition at deaf schools, or being mainstreamed into hearing schools.

One Atelier Project workshop I attended used storytelling to practice image training and interpretation from Japanese (in written form with some emoji) to JSL. Storytelling is an important tool in JSL training. Components that appear to be pantomime, theatrics or embellishments are important for the effective performance of JSL and should be viewed, respectively, as classifiers, intonation, and description. Good Deaf storytellers are admired for their communication skills and their ability to transmit Deaf cultural traits and values of the Deaf.

During the workshop, participants were given a Japanese text—a script with a simple story. They were asked to memorize it and interpret it into JSL. Performances were videotaped so they could be re-watched and carefully scrutinized. The few hearing participants were asked to go first. Most of them treated the exercise as a literal translation from a written form of Japanese to a signed form; in other words, their performances were heavily influenced by Signed Japanese. The Deaf teacher told them that their signing was incorrect. Next, deaf and Deaf people were asked to show their versions of the text. Many deaf participants were chided for signing in a “hearing” manner and encouraged to become “more Deaf,” to change their performance so as to become culturally Deaf.

Finally, the Deaf teacher demonstrated his version in JSL. He often uses classifiers rather than standard signs. He also stressed the use of imagery and everyday experience, for example the actual experience of walking a dog that both hearing and deaf participants did not consider. Most importantly, his rich facial expression served as a crucial grammatical component for conveying thoughts and feelings.

The Atelier Project workshops’ goals are to eradicate Signed Japanese, replace it with JSL, and transform deaf orientations into Deaf identity. Most times, such transformations are achieved. Small-d deaf people often discover their deafness as adults and resent the fact that they were denied effective communication, the use of JSL, and group identity, because the mainstream society emphasized their so-called disability and enforced oral education policies. They now have the chance to associate with Deaf people and groups to improve JSL competence and gain a greater understanding of Deaf culture. Through such endeavors, deaf people can become Deaf.

Steven C. Fedorowicz is a cultural anthropologist, visual anthropologist, and associate professor of anthropology in the Asian Studies Program at Kansai Gaidai University. His interests include deaf communities, sign language, performance, globalization and ethnographic photography. See more of his work at http://visualanthropologyofjapan.blogspot.com/.