Putting an End to the Rain of Apostrophes

On February 19, 2018, Kazakhstani social media came alive when the government announced a new plan for the Latin-based alphabet for Kazakh. It was the third government plan rolled out in the span of a year.

This most recent (at the time of writing) version of the Kazakh Latin alphabet generated a sigh of relief from many who had strongly opposed the previous version and its ubiquitous demand for apostrophes in lieu of diacritics. Friends began to circulate a meme—in Russian, curiously enough—joking that “F’r’o’m’ n’o’w’ o’n’ i’n’ t’e’x’t’s’ i’t’ w’i’l’l’ a’l’w’a’y’s’ b’e’ r’a’i’n’i’n’g’”. 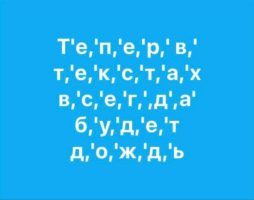 People began debating the pros and cons of Kazakh’s latinization long before these controversies about the Latin alphabet—or more precisely, which Latin alphabet—arose. Political commentators debated whether the shift signaled a move from Kazakhstan’s traditionally close relationship with Russia and toward stronger ties with the United States and European Union, or whether it was a sign of pan-Turkic solidarity with Turkey. One concern was a possible generational divide: Would older citizens be unable or unwilling to adapt to the new alphabet and simply stop engaging with print culture? Would younger generations find a dearth of books printed in the Latin Kazakh they had been taught, and therefore, find their print resources severely limited while the publishing industry struggled to catch up? Some turned to the recent histories of latinization in Turkmenistan, Uzbekistan, and Azerbaijan for answers. Like Kazakhstan, these post-Soviet countries also count a Turkic language as a national ethnolect, but they latinized at earlier times to different effects.

Comparisons with other post-Soviet countries offer limited insight, however, because Kazakhstan’s demographics and geography make it unique, especially regarding political and linguistic relations to Russia and the Russian language. Upon achieving independence in 1991, it was the only former Soviet nation without its titular ethnicity as a majority. While an overwhelming majority of ethnic Kazakhs have historically claimed Kazakh as their native language, the number of Kazakhs with active knowledge of Russian may, in fact, be higher than those with active knowledge of Kazakh. Nevertheless, the government has repeatedly stressed that Kazakh’s switch to Latin does not mean a move away from the population learning Russian (still to be written in Cyrillic). It is, rather, part of the government’s plan for the entire population to become trilingual in English, Kazakh, and Russian.

The script changes form a subset of national developmental projects. Nursultan Nazarbayev, the president of Kazakhstan since the fall of the Soviet Union in 1991, has announced that latinization is the first priority within a larger program, “Spiritual renewal” (Kz. Rýhanı jańǵyrý, in the new orthography), meant to establish Kazakhstan’s “national identity and uniqueness.” This program is part of Kazakhstan 2050, a massive set of development projects aiming to place Kazakhstan within the world’s top thirty economies by 2050.

Although current discourses center on Latin Kazakh as a modernizing move, the government’s 2025 deadline for full transition to Latin would come almost a century after Soviet planners experimented with Latin orthographies for Kazakh. As part of Soviet post-Revolutionary efforts of the 1920s and ’30s, the USSR developed Latin orthographies for most of its minority languages to signal the Soviet Union’s repudiation of tsarist colonial policies and missionary russification. For Kazakh and its neighbors, this meant replacing the previous Arabic-based orthography, although the Kazakh Cyrillic alphabet currently in use would itself replace this latinization only a decade later.

While we were in Kazakhstan in summer 2017, friends and journalists circulated rumors about proposed changes, while signs began popping up in anticipation, such as an ice cream cart in Central City Park of the capital Astana. 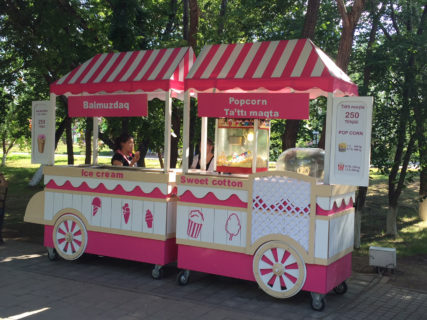 In summer 2017, in Astana’s Central Park, a cart selling cotton candy—ta’ttı maqta—gets a head start on using Latin orthography, anticipating the apostrophe-laden Kazakh, while also making use of the Turkish dotless i. M. Barker

The women tending the cart, when questioned, claimed to know nothing of their boss’s decision to spell тәтті мақта (cotton candy) “ta’tti maqta.” The spelling proved prescient when the government introduced the apostrophe-laden alphabet that October.

People objected to the apostrophe version because of its sheer messiness, while also noting comically unfortunate bivalences that particular transcriptions of Kazakh words would acquire in Latin. Perhaps more importantly, people reacted to the government’s sudden rollout of the new system, without consulting linguistic experts or the general public. The government’s opaque decision-making process came to index a more pervasive disregard for public interest. Our friends flooded Facebook, upset at the new transliterations of their names, and noted with wryness that each version preserved Nursultan Nazarbayev’s name apostrophe- and diacritic-free. The newer, relatively apostrophe-free version revealed in February 2018 was equally unexpected, yet some interpreted it as evidence that leaders had noted citizens’ outcry on social media and had reacted accordingly.

Western English-language media coverage of the issue primarily worried about its effects in English-language press, noting that journalists would have to learn to write Qazaqstan, rather than the Kazakhstan to which they had become accustomed (although scholars of the region have often used Qazaq or Kazak as alternative spellings, aware that “Kazakh” is a transliteration of the Russian ethnonym Казах). For Kazakhs, a primary concern was re-establishing the equivalence of the first and last phonemes denied by the Russian spelling.

Nationalists framed this as an anti-imperialist move, some claiming that “national spiritual decolonization starts with the change to the Latin alphabet!” Yet the emblematic Q also anchors nation branding, in which, according to Andrew Graan, state action orients to “imagined tourist and international investor publics” with the hopes of attracting mobile capital through favorably controlling how national representations circulate. Business names and branded commodities comprise most of the usages of Latin predating the official script changes. While advertisers often use Latin letters to various effects in non-Latin script environments (for example, Dickinson 2015), it is notable that these businesses often contain some form of the name of the nation-state itself and its noticeable Q, like Qazaq Air, Qazkom, and Qazaq Banki.

Local testimonies about proposed alphabets primarily cite aesthetic concerns, couched in a language of felt naturalness, ugliness, or even silliness. Critics suggest a keen sensitivity to the tongues and eyes of imagined global English speakers, who would either (mis)pronounce the Kazakh words based on flawed latinization or, in the case of the apostrophe, consider the whole endeavor a misguided imitation of Western modernity. These discussions foreground questions of visual aesthetics while putting aside the linguistic relation of spoken to written language, or phoneme to graphic symbol. In fact, the government publicized the latinized alphabets as charts that map a one-to-one equivalence between a Cyrillic letter and the Latin equivalent, bypassing a discussion about the original appropriateness of Cyrillic written representations to spoken Kazakh in the first place.

Instead, the government largely justified the switch to Latin as a move that would ensure Kazakh’s “inclusion in the global information space.” This was the official line in support of the apostrophe alphabet: with “no hooks” you could “enter them into a computer right away” on a standard QWERTY keyboard. Tech workers were quick to point out, however, that web addresses do not accept apostrophes, and neither do Twitter hashtags and other digitalized forms like logins, passwords, and email addresses. While officials justified the apostrophe alphabet by appealing to its compatibility with mobile technologies and online interaction, in another sense, these justifications were the grounds for the death of the script, affording a political critique on the government’s ability to deliver on grand promises.

These orthographies—and individuals’ stances regarding them—emerge within a complex historical and political textual field, so that latinization will involve more than a straightforward, letter-by-letter transliteration of text. Official orthographies may find themselves competing with existing practices that individuals have already developed for writing Kazakh with Latin keyboards. They may have unforeseen consequences for social and textual engagements. As this unfolds, we look forward to following individuals’ adoption, resistance, and playful appropriation of the orthography. Whichever alphabet finally settles on the Kazakh steppe, we forecast a steady downpour of memes to follow.

Alex Warburton is a graduate student at Harvard University.

Meghanne Barker is a collegiate assistant professor at University of Chicago.