Relationships with Our Pets Offer Social Stability during COVID-19

Human-animal interactions have played an important role in evolution. Pets—and their role in human social life—are part of that story.

Last March when my university switched to a virtual setting in response to COVID safety measures, I started sheltering in place so I could drive and stay with my parents for a couple of months. I live alone in the Midwest, so it was not only lonely but also dreary and cold, and my mental health took a major hit. I found myself craving not just human interaction, but specifically the comfort of a pet—I missed my cat Laddoo, who died only six months prior, more than ever. I started seeing news online and across social media that others felt similarly, and animal shelters were seeing a huge increase in adoption and foster applications.

My PhD focuses on multispecies relationships, and I had begun delving into Donna Haraway’s work on natureculture and companion species. As I familiarized myself with the importance of our relationships with other species for our biological and cultural evolutionary history, I jumped at the opportunity to study the importance of human-pet relationships during times of major stress.

Many biological studies have examined how overlapping niches lead to the coevolution of species. For example, the domestication of cows influenced not only cow biology but also the spread of a human genetic mutation allowing many of us to process lactose post-weaning. Humans and dogs coevolved to read and respond to each other’s emotional cues. Still, pet ownership is often posed as an evolutionary paradox with no benefit to humans. This is because we rarely consider the importance of animals in human social lives.

This is largely due to the nature-culture divide common in Western science that separates nature and human culture into opposing domains and ignores that our relationships with other species were central to being and becoming human. But as multispecies approaches to anthropological work expand, scholars are starting to acknowledge how interconnected human and other species are to each other in our evolutionary, ecological, cultural, and social processes. To better understand this aspect of our evolutionary history, I conducted an ethnographic study of pet owners across the United States investigating how their relationships with their pets served as a stabilizing force during an unfolding pandemic.

The author’s white and grey cat, Kulfi, sitting cozily in her rocking chair in their sunroom.
Credit: Sana Saiyed 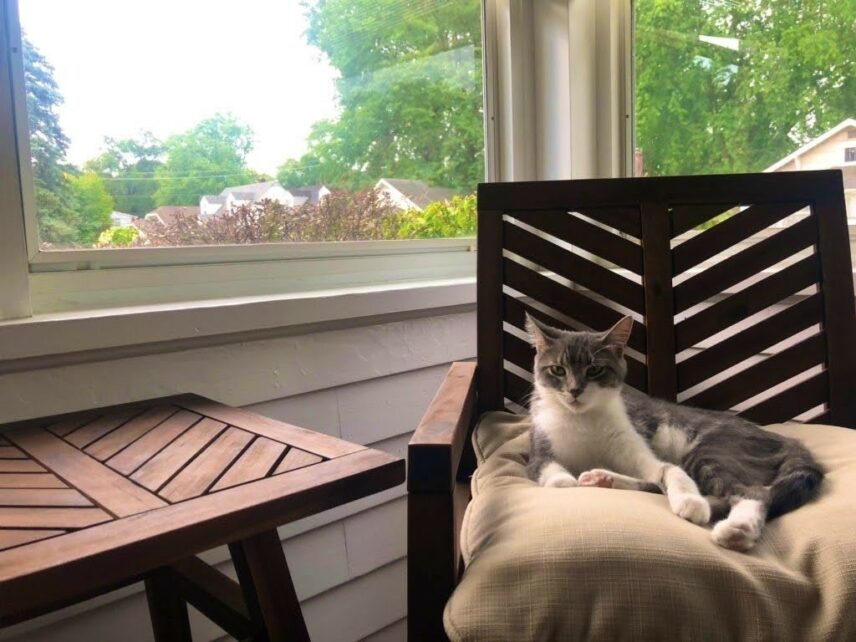 Kulfi’s rocking chair is much comfier than my own.

From mid-March of 2020 onward, much of the United States was socially isolating as the COVID-19 pandemic spread. People went weeks without socialization and physical touch, while others were locked indoors, without reprieve, with family members. Regular routines changed, classes and work moved online, and relationships with friends, family, and coworkers shifted form. Without human interactions, which serve as social support against harmful stressors and negative health outcomes, our physical and mental health suffer. Fear and anxiety surrounding the disease itself also strained our mental health, worsened by the knowledge that the disease is transmitted through social interaction with people we love. Removed from normal social contexts, depression and anxiety were common psychological responses to the strict but necessary measures to limit disease spread.

Through semi-structured interviews with cat and dog owners, I found that pets provided stability in this otherwise unstable situation because of the specific social and familial roles they play in human life that are often unfillable by other humans. The presence of pets diminishes negative physiological response to stress even compared to the presence of human friends and spouses, suggesting that pets provide specific forms of emotional support, security, and physical affection. This creates a complex entanglement between humans and pets where both serve vital roles in the other’s health and survival that are unattainable within species.

Genevieve, who lives alone, has had her dog Oliver for 11 years. Oliver has provided expansive support to Genevieve during major life events, such as a broken engagement, her father’s death, and multiple cross-country moves. Throughout these experiences, Oliver has been a stable and instrumental relationship which remained consistent during Genevieve’s sheltering in place.

For Fran, her relationship with her cat Mango remained stable through multiple difficult events in their lives, including the pandemic:

My husband…was sick off and on for about eight years, and [the cats] were such loving companions. They knew when he wasn’t feeling well, and they would just curl up with him. The three of them were together all the time. And after [my husband and one of the cats] died, Mango developed this lovely habit: she lays on the sofa about a foot away from me, and about every 10 minutes she reaches her little paw out and pats my arm and it’s like— ‘are you okay?’ I know that’s what she’s saying.

Mango’s check-ins also seem to be a testament to nonhuman species’ ability to understand our cues and redefine relationships depending on our needs. Not only is Mango the last surviving in-house familial relationship Fran has, but Mango incorporated new and caring interactions into that relationship as she, too, adjusts to change. For Fran, Mango’s presence is simply a continuation of her primary at-home stabilizing relationship. These stable human-pet relationships and the importance in the interviewees’ lives reinforce the notion that pets function as kin in human life, extending family and important social networks to include other species.

For Sophia, the presence of her cat Gertrude makes any place her home. She says, “moving to Ohio will be easier because I’m moving with Gertie. That first night after setting up my bed, she’s going to hop on and curl up next to me. And that’s a comforting thought.” Home is thus co-constructed by the members who live within it, and pets fill an important role therein. Maxx and Mathilda, a cohabitating couple, feel as though they are co-parenting their dog Djinn-Djinn, who helps them relieve relationship tension. Djinn-Djinn is situated within Maxx and Mathilda’s joint family, where they note that he strengthens their relationship. Maxx says that, “even though [Mathilda and I] love each other, you’re next to each other all the time and not leaving. Tensions naturally rise. But I mean you can’t be mad at each other when he’s jumping around and flopping around and rolling. I think he’s definitely helping there by being a bit of a stress reliever.”

Each person I talked to specifically mentioned an aspect of their mental health that their pet provides comfort from (stress, depression, or anxiety), but also the specific ways in which they provide that comfort. For Bilal, his dogs provided entertainment, company, and physical affection, whereas Lynn’s dog Jamie’s physical presence and nearness helps her not feel as alone when she is distant from her family. For Maxx and Mathilda, Djinn-Djinn relieves tension between them, keeping them from unnecessary arguments and the mental toll that results. The lasting psychological effects of epidemics and associated social distancing measures are well-documented, and it would be interesting to see how pets mitigate some of these effects now with large-scale vaccination efforts and that many aspects of social life have returned.

When the world around us drastically changes, we long to engage with what makes us human. For some, pets are an important interspecies relationship in their construction of being and a disruption in normalcy places further importance on them for stability. As Fran states, “we relate to each other through our pets. They’re our family, they’re our coworkers, they are our world right now. Our world has gotten much more narrow, but they enrich it, and they make it special.” This notion of the narrowness of our current world is poignant. Interactions are essential events in relationship building and maintenance, and in an attempt to contain COVID-19 spread, government mandates severely restricted our opportunities to interact with other humans. Human-pet interactions were safe—so while human-human relationships were essentially put aside, human-pet relationships were building and maintaining.

Intra- and interspecies relationships are always in flux to respond to the dynamic needs of those involved. As people’s needs shifted during social distancing orders, their relationships with their pets were being renegotiated to provide stability. Government mandated social restrictions changed the needs of many humans across the world as our ability to physically interact with each other shifted. Because pets already hold specific social and familial roles in human life, these interviews revealed that human-pet relationships served as stabilizing social forces for people while other aspects of their lives remained unstable. Together, humans and pets create shared experiences and bonds that persist throughout time despite shifting political, ecological, and even disease landscapes. Since the completion of this ethnographic study, I adopted a cat and she provides me with so much happiness and comfort despite being a little rascal. I worry about what will happen when work is no longer virtual and I leave for several hours every day. But just as human-pet relationships shifted and renegotiated in response to our pandemic needs, they will again in response to our new ones.

Author’s note: Some participant names were changed for anonymity.

Sana is a PhD candidate at the University of Notre Dame studying multispecies entanglements. Her work investigates how human sociocultural dynamics and monkey socioecology are cocreated by humans and monkeys on the island of St. Kitts and how this can better inform wildlife management policies.