Ruth Annette Fink Latukefu, née Ruth Annette Fink, was born in Frankfurt am Main. The Finks, a secular Jewish family, fled Germany in November 1938 and settled in Sydney, Australia. During the war, the family was viewed as enemy aliens. Ruth’s experience as a stigmatized outsider gave her a felt kinship with the Australian Aborigines she would study.

Ruth’s research on Aborigines began in 1954, when she undertook master’s degree research at the University of Sydney. What distinguished Ruth from many (but not all) of her contemporaries was her focus on Aborigines undergoing rapid change. A. P. Elkin, longstanding head of the Department of Anthropology at The University of Sydney and an advocate for the study of Aborigines living in various colonial settings, supervised the research. Her fieldwork site was Brewarrina Government Aboriginal Station (popularly called “the Mission”) in northwest New South Wales. Against the wishes of the Mission, some Aborigines had migrated to nearby Brewarrina, a town with a white majority. The differences between “town” and “Mission” Aborigines became the focus of Ruth’s master’s thesis (1955) and the 1957 Oceania article stemming from it, “The Caste Barrier.” The article argued that Australia’s assimilation policy created intra-racial tensions and stratification, dividing Aborigines pursuing economic advancement (“town” Aborigines) from those who rejected white culture (“Mission” Aborigines).

Ruth next undertook a survey of the Wajarri Aborigines in the Murchison District north of Perth, this time under the supervision of Ronald Berndt at The University of Western Australia. From 1955 to 1957, Ruth visited stations and towns, recording songs, taking photographs, and interviewing. The research would be reported in her Columbia University dissertation, “The Changing Status and Cultural Identity of Western Australian Aborigines in the Murchison District, Western Australia, 1955–1957” (1960), a summary of which appeared in Berndt’s festschrift for Elkin, Aboriginal Man in Australia (1965).

With PhD in hand, Ruth assumed appointments at the Australian School of Pacific Administration (ASOPA) in Sydney and at The University of Sydney. In 1966 she married the Reverend Dr. Sione Latukefu, the first Tongan to become a professional historian. The couple soon moved to Port Moresby to teach at the newly established University of Papua New Guinea. In the late 1980s, Sione Latukefu became the principal of the Pacific Theological College in Suva, Fiji, but when his health declined, the couple relocated to Canberra, where Sione died in 1995.

Ruth outlived Sione by 26 years. During most of those years, she lived at her parents’ house on Sydney’s northern beaches, hosting the many anthropologists and other friends who visited and working on her memoirs. In 2005, Ruth deposited her recordings, photographs, and field notebooks with the Australian Institute of Aboriginal and Torres Strait Islander Studies; they may be accessed via their website.

The photographs have proved invaluable to descendants of the Aborigines Ruth studied in the 1950s. To the end Ruth retained a passionate interest in Aboriginal affairs and Aboriginal peoples. It was her fervent wish that Aboriginal and white Australians might “reconcile.”

A woman with close-cropped white hair is pictured. She is wearing a black shirt with a necklace. The background is out of focus, but the outline of a person and horizon can be seen. 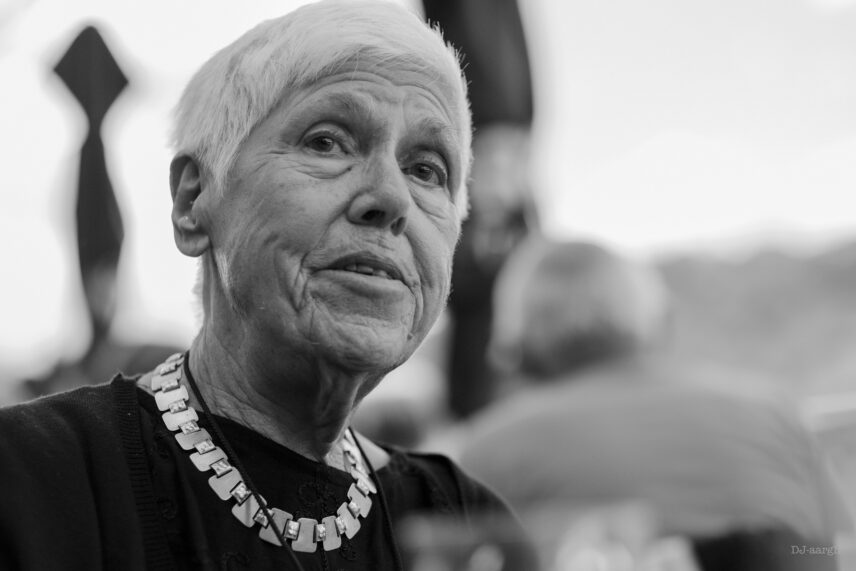